Paradise ponders: all kinds of stuff edition...  I hardly know where to start on this one!

I guess last night, when we had a beautiful scene on the Wasatch Mountains to our east just before the sun dropped down below the Wellsville Mountains to our west.  The photos below were shot from my office windows.  Gorgeous, it was... 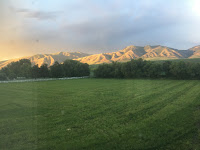 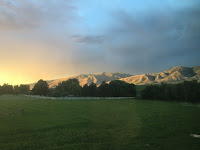 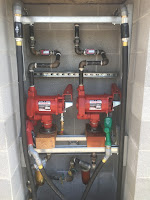 Yesterday morning, bright and early, the fellows from Golden Spike Electric showed up to finish the job of wiring our filling station.  All that had remained was wiring the explosion-proof “whip” to connect the pumps to power.  The photo at right shows the completed unit.  It all works just great!  We filled the diesel tank of my tractor (7 gallons) in under 30 seconds.  And no clumsy 5 gallon cans to deal with!  Woo hoo!  There are some leaks that showed up after we pressurized the system with the pumps, but the plumbers who did the job will be here soon to fix those.  We have our own filling station, off-road diesel and ethanol-free gas!

I worked for several hours yesterday wiring up the pump controller in my cedar shed.  That also involved several hours of looking for parts, mostly 8 gauge wire in the appropriate assortment of colors.  That wasn't so easy to find!  The first photo below shows the controller mounted to the wall, cover off.  If you're not familiar with these controllers, they're interesting gadgets.  This model takes up to 40 amps single phase 60 Hz 240 VAC as its input, and provides up to 30 amps three phase variable frequency 240 VAC as its output.  The output frequency is controlled by a pressure sensor, and the output is intended to drive a centrifugal pump.  In my case that will be a 5HP pump, and we're going to keep the pressure at a constant 65 PSI.  The device is based on switching technology, making it both quite small and remarkably efficient (>95%).  It's controlled by a computer (of course!), and has several interesting programmable features.  Of interest to me are two inputs that can be used to enable/disable the pump, and an output that can tell some other device that the pump is running.  There's also a serial connection that can provide much more detailed information.  The second photo below shows the finished installation.  Input power comes in on the lower left, output through the flexible conduit that will connect to the pump when it's delivered.  The pump will sit on the pad you see below and right of the controller.  That pad is sitting on 1" thick anti-vibration pads, which hopefully will keep the vibration from the pump down to levels that won't shake my cedar shed apart!  :) 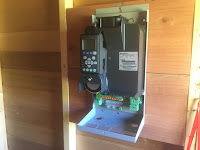 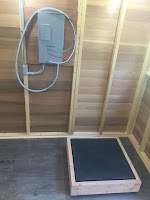 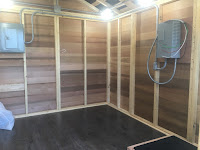 Debbie and I took our friend Michelle H. out to lunch at the Black Pearl, where we all had sushi (perfect for a blazing hot day like yesterday was!).  She'd never had sushi with raw fish before, but she had one bite of Debbie's roll that included a layer of hamachi.  She liked it. :)

The sprinkler guys worked hard all day long, and got a lot done.  I'd say they're well over half-way finished with the trenching and pipe installation.  Our yard looks like some mutant gopher is wreaking vengeance upon us – trenches are everywhere!  Toward the end of the day they went to test a new section but couldn't get any water.  With a little investigation, we discovered that the Paradise Irrigation Company had turned off the water while they de-mossed the canal (something they do several times each summer).  They neglected to warn us, though, so we were taken by surprise.  It's back on now...

In the afternoon, Debbie spotted some really dramatic looking clouds and rain to the north of us.  I looked at the weather radar and saw that it was pouring up there – so we decided to chase the storm.  We hopped in the Model X and zipped northward, never making it closer than the outer edge of any storm.  No matter, the dramatic lighting made for some beautiful views.  We went up to the Cherry Peak ski resort (first time either of us had ever been there), and the drive back was full of views to the west.  The valley was brightly lit, intermittently through broken cloud cover.  Where we were was in cloud shadow.  It was around 7 pm, so the sun was low and the slanted light made for some very dramatic lighting of the valley floor.  On the way home we stopped at Aggie's for an ice cream cone.  That was a nice way to end the day...
Posted by Unknown at (permalink) 9:31 AM No comments: