And the trenching continues... 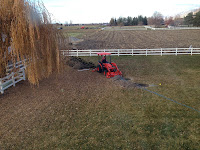 And the trenching continues...  After I finished fixing the irrigation pipe late this morning, I started back on the trenching.  Now I'm working on trenches that are inside our back yard, which means I'm tearing up the lawn I worked so hard on earlier this year.  Oh, well, the grass will grow back again.  I think :)

The trench I'm working on in the photo will be carrying a water pipe (at 48"), a gas pipe (at 36") and two direct-burial CAT-6 network cables (also at 36").  Just a little bit in front of where the tractor sits in the photo, another trench will branch off to the left.  That trench will carry water and gas under our driveway (where there's a 4" ABS pipe) where they will be stubbed out.  That's a provision for a future greenhouse.  Then the trench I'm working on will carry on straight into the center of our house, where the water and network will enter directly into the “mechanical room” in our basement.  Just before that trench his the house, another branch will head due east for about 40', carrying the gas line to the gas meter.

The back yard will be a real mess when I finish with this :(
Posted by Unknown at (permalink) 2:42 PM No comments:

House roof: the steel is going on!

House roof: the steel is going on!  The first two photos show the machine that takes a coil of steel sheet and turns it into a finished standing-seam panel, 16" wide and any length.  The last photo shows the NE corner of our house and the first panels being installed... 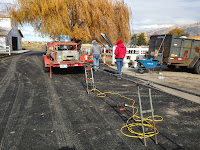 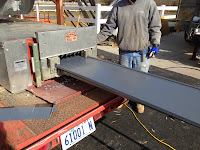 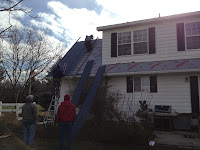 Posted by Unknown at (permalink) 2:32 PM No comments: 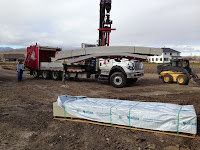 Barn: siding arrived...  The only thing that happened with the barn today is that a building supply truck arrived with the siding and trim boards.  It provided a moment's distraction from the shivering, though :)

We were expecting the rock to arrive today, but it was a no-show.  The masons are supposed to start on the rock tomorrow, but that will be just a bit difficult if they have no rocks to install!
Posted by Unknown at (permalink) 2:30 PM No comments:

Pipe: 0, backhoe: 1...  Yesterday while trenching near our barn, I managed to bust another section of 6" irrigation pipe.  I used the backhoe to get within about 3" of the pipe (I knew right where it was), then tried to use a shovel to locate the pipe.  The danged clay was so hard-packed, 2' down, that I couldn't make a dent in it.  So I thought I'd be real careful with backhoe and dig a little closer.  First try, and you see the results in the first photo.  Dang it!  So I ran back up to Valley implement and bought another “repair kit”.  Then this morning I dug out the pipe, completely exposing it, cleaned around it with a shovel (the only time I was warm today!), sawed out the broken bits (second photo), washed all the soil off the ends (third photo), and then slipped a piece of pipe and repair coupler on to fix it (last photo).

The whole process of repairing the pipe took about four hour, plus the two hours to get the parts... 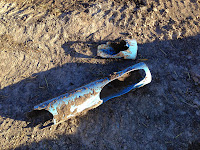 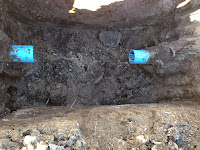 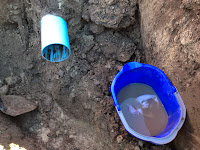 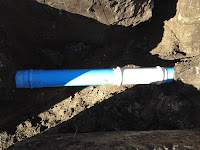 Posted by Unknown at (permalink) 2:26 PM No comments:

I'm not used to working in the cold...

I'm not used to working in the cold...  After working outside most of the day today, that is becoming quite obvious :)  It's been between 23°F and 38°F all day today.  For part of the late morning it was sunny, and when that lovely fusion-powered orb was showing, I was plenty warm.  When I was shoveling this morning, I was also warm.  But most of the day I've been using my tractor's backhoe to dig trenches – and the wind is blowing, and the sun is hiding behind clouds, and I got cold!  I've had to retreat to the warmth of the house on several occasions, to allow my fingers and toes to regain feeling.  As I type this, my feet still feel like frozen blocks of ice, though my fingers seem to be functioning ok.

And it's not even winter yet!

Yikes!  I need to find some warm winter wear, that's for sure...
Posted by Unknown at (permalink) 2:04 PM No comments:

Holiday dinner party...  Via my lovely bride...
Posted by Unknown at (permalink) 4:18 AM No comments:

Remembering Halala Pala...  Yesterday Debbie received the card below from the staff at VCA (the veterinarians who treated his cancer).  We've been impressed over the years with both their skills and their caring.  This is another example...

Italy comes to its senses...

Italy comes to its senses...  It's probably only a brief interlude, but yesterday an Italian appellate court overturned the manslaughter convictions of six geologists.  Their “crime”?  Failing to accurately predict an earthquake...
Posted by Unknown at (permalink) 3:34 AM No comments:

“Net neutrality”...  What do I think about it?  I think about it in apocalyptic terms: if enacted, it would be the end of the Internet as we know it.  Bye bye, competition and lively innovation; hello, stifling regulation and taxes.  Bye bye, small and innovative ISPs; hello, a few big moribund and hidebound ISPs (think AT&T).

For the details, see Andy Kessler's plain language, even-handed primer.  Following the money trail, Forbes talks about the inevitable taxation that would follow.

“Net neutrality” is a carefully selected term – it sounds positive, it sounds like something nobody in their right mind would be against.  In actuality it is a euphemism for regulation.  The way that the nice-sounding net neutrality would be implemented is by creating a regulatory bureaucracy, and that bureaucracy would start publishing rules and regulations by the hundred, and charging fees and taxes.  The result of that is totally predictable, as we've seen this movie many times before: innovation will be stifled (by all the regulations), large incumbents will be empowered (as the relative cost of regulatory compliance for them is low), and new entrants will be discouraged (it would have to be an extraordinarily well-funded startup to be able to pay for regulatory compliance and the associated documentation).  Our ISP in California was a small, one-man operation that provided radio-linked Internet access.  His startup was self-funded.  If ISPs were regulated as a utility, he would never have started his little company – and we would have been stuck with the terribly inferior (and much more expensive) satellite ISP that we used before he started his company.  Multiply that by a few tens of thousands, because that's how many ISPs we have now.  If net neutrality is implemented, it's easy to predict that all these ISPs will be consolidated into a few big ones, or they'll go out of business.

One aspect of the net neutrality proponents' argument astonishes me: they're actually arguing that consumers should get something for nothing.  It's the socialist mindset applied to technology.  What do I mean?  Consider that the central argument for net neutrality proponents is the notion of “no fast lanes”.  Said another way, they want anyone to be able to access anything, as much as they want to, with no restrictions or costs.  The ISPs are in the business of renting their pipes, and their pipes can only carry so many bits per second (called “bandwidth”).  It's exactly analogous to your plumbing pipes: they can only carry so many gallons per minute.  The net neutrality proponents want to tell the ISPs that they can't restrict how much data any source (like Google, or Netflix) tries to push down their pipes – and they also can't charge any more for it.  That means that the only way the ISPs could pay for bigger pipes is to charge the consumer – and when the FCC regulates the ISPs as a utility, those price increases will have to be approved by the FCC.  The likely result is the same one we had when the FCC regulated AT&T: slow service and slower increases.  It's a recipe for an Internet quagmire.  It will work just as well as Venezuela's attempts to regulate toilet paper prices.

Even more astonishing to me is that the Democrats manage to get some political traction with this when there is no problem that needs to be solved.  Their entire argument is couched in scary-sounding hypotheticals: the ISPs could block web sites; the ISPs could create “fast lanes” (which actually might be a good idea!), etc.  None of these things are problems today.  It's as if they said “grocery stores could carry only Wonder Bread!” and used that as an excuse to regulate grocery stores!  That hypothetical argument totally ignores the beneficial effects of competition.  The grocery store that carries only Wonder Bread would soon find itself out-competed by other stores.  The ISP that blocks Netflix will find itself out-competed by other ISPs – and thanks to the current lack of regulation, there are plenty to choose from.  We live out in the sticks in northern Utah, and we have nine ISPs to choose from: one cable provider, two DSL infrastructure providers, two satellite providers, two cellular providers, and two wireless point-to-point providers.  If our cable provider decides to block sites we want access to, with one phone call I'll switch to an ISP that doesn't.  Where's the problem?

Imposing a regulatory regime on the incredibly successful Internet should be an absolute last resort that is considered only in the presence of a huge problem that the competitive landscape doesn't address.  Today is not that day...
Posted by Unknown at (permalink) 3:28 AM No comments: