Catch a kitty!  We must do this!
Posted by Unknown at (permalink) 5:25 AM No comments:

Oh, this is very hopeful!

Oh, this is very hopeful!  Scientists have discovered a potential mechanism for an entirely new class of antibiotics...
Posted by Unknown at (permalink) 5:22 AM No comments:

Toyota servicing...  Yesterday I got my 2007 Tundra serviced for the first time in Utah.  In Jamul we've gone out of our way to avoid using the service from the dealer.  The prices at the dealer were outrageously high, and they were constantly trying to “upsell” us on things that weren't actually needed, but which of course generated lots of profit for them: filters, belts, etc.  For years we've been taking our vehicles to Dave at Jamul Auto Care, where we not only got reasonable prices, but also first-class work and honest evaluations and recommendations.  We love Dave!

So I had some trepidations about getting service up here in Utah.  There is no Dave here, so far as I've been able to determine.  There are independent mechanics – lots of them – but mainly for American vehicles and tractors.  The closest guy I could find who could handle my Tundra was 50 miles away.

I decided to try the local Toyota dealer, Young's in Logan.  I made an appointment on their web site, and pulled in at the appointed time.  I'm up here by myself, so I had to wait for my truck to be done.  I had a routine service plus one minor recall item (the window switch in the driver's door).  Two hours after I pulled in, they let me know my truck was done.  They'd done the usual oil change, lube, tire rotation, and consumables check.  They'd also done the recall item.  I steeled myself for shock at the bill – in San Diego, it would have been between $250 and $400, depending on exactly what consumables they replaced (and there were always consumables to replace).  The fellow handed over the bill apologetically, cringing in preparation for my rant.  Not a good sign.  I looked at the bill, and the only number I could find was $51.25.  “Is that the price?” I asked.  “Yes” said the cringing clerk, hesitantly.  In subsequent conversation, I found out that they get a lot of push back from their customers at the high cost of routine service.  There's no way I could get just an oil change for that price in San Diego!  On drilling down a bit, I discovered that they had replace exactly zero consumables – telling me that they were all in fine shape as they were.  The possibility of that happening at the San Diego dealership is exactly zero.  Then to top it off, they had washed my truck!  It hasn't been this clean since the day I bought it.

I love Utah!
Posted by Unknown at (permalink) 5:19 AM No comments:

Progress report...  Well, it's more like a frustration report for the past couple of days.  Monday and Tuesday the siding crew was missing in action.  My builder tracked them down – in Idaho.  They decided to go work on another job instead of my barn.  Dang it!  That same crew was supposed to have installed some new flooring on my house's balcony by now – and the roofer working on my house's roof was depending on that being done.  Unless that balcony floor is installed today, the roofer is going to be held up.  Double dang it!  Job one for me today is to take a big, heavy pipe and beat on the siding guys until they get that balcony floor on.  This has the potential for holding me up from heading down to Jamul to pack up my wife, our animals, and our meager possessions to actually, like, move up here.  Not happy.

Then on Monday afternoon, as I was digging a trench for getting the water, gas, and network to the barn, one of the roofers came over and asked me if I realized that my tractor was spewing oil all over.  No, as a matter of fact, I didn't know.  After a little investigation it became clear that my tractor had sprung quite a leak of hydraulic fluid.  At $25 a gallon, that's like liquid gold squirting onto the yard.  I made a call for urgent repair to Agri-Service, the folks I bought the tractor from, and who handled the warranty repairs.  They promised to be out the next day (Tuesday).  They also asked me to investigate it a bit myself, to see if it was something simple like a loose fitting.  That's completely reasonable.

So yesterday (Tuesday) morning, I dismounted the backhoe from the tractor.  That operation requires hydraulic power, and that hydraulic fluid was spewing as I got the backhoe off.  I had just barely enough hydraulic fluid left to move the tractor away from the backhoe and park it.  At that point the reservoir was empty.  The leak had gone through $100 worth of hydraulic fluid.  Yikes!  Once the backhoe was off, I could see exactly where the leak was: in a hose on the tractor that connects hydraulic fluid to the backhoe.  It turns out that the hose had been pinched somehow (we haven't figured exactly how yet), and there was a small tear in it.  It doesn't take much to make a prodigious leak in a high-pressure hydraulic line.

I drove up to Agri-Service (about a 40 minute drive, as they're in Hyde Park) to buy some more hydraulic fluid – I knew I'd need it to refill the tractor once the bad hose had been fixed.  I walked up to the parts counter to order it, and the sales guy (Lawrence W.) who sold me the tractor walked out of his office to greet me.  When he found out that I was there to buy the hydraulic fluid, he told the parts guy that Agri-Service was covering that cost.  I didn't expect that – but given the cost of that stuff, it was certainly a welcome gesture.  Then he said he'd be down shortly to look at my tractor.  As I was driving home, a second guy (Kelly S., a mechanic) from Agri-Service called me and said he'd also be down shortly.  In no time at all, two Agri-Service guys were poring over my tractor.  They got the bad hose removed, and we made arrangements to get the hose replaced that night, and Kelly would come over in the morning to reattach it.  I followed Lawrence back toward Hyde Park so we could get a new hose made, and the idea was that I'd return home with it.

Well, we never got to Hyde Park – because Lawrence had a better idea on the way up.  He called me and we met at one of his competitors – a place called Ellis Implements – on the south side of Logan, much closer to my house.  He had them make up the replacement hose, which he paid for, to save me the extra driving up to Hyde Park and back.  Ten minutes after arriving there, I had a new hose.  Now this morning Kelly should show up with his special “crow’s foot” wrench (like the one at right, but with a longer shaft).

I'm starting to get used to the idea of service like this.  It's built into the culture here.  I love Utah!

As opposed to all the other frustrations, the roofers made good progress yesterday.  They've finished the northern half of the roof, and have started on the southern half.  They're very happy about that, as now they have much more sunlight to warm them up...
Posted by Unknown at (permalink) 5:06 AM No comments: 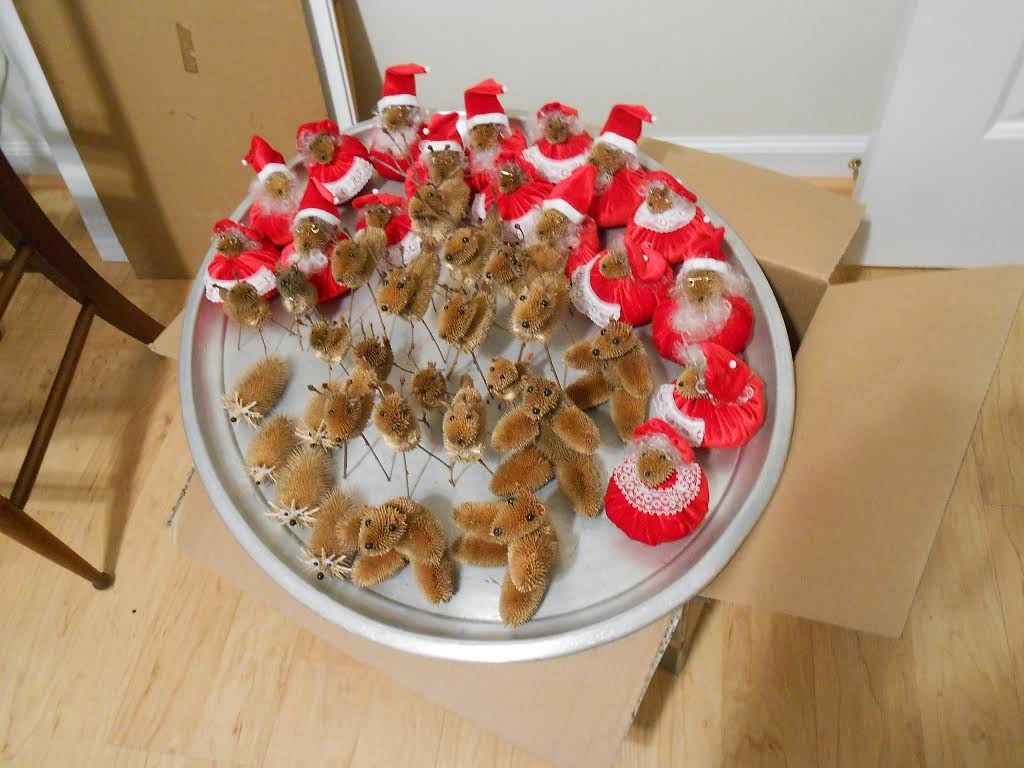 Crafty mom...  A few weeks ago I shipped my mom a couple small boxes of teasel seed pods.  She's been turning these into little decorations: Santas and a variety of animals, as at right.

Locals here hate teasel – it's a pernicious weed that's hard to get rid of.  They organize “burn the teasel” weekends to get rid of it.  When they saw me “harvesting” the seed pods, then discovered that I was shipping some seed pods back to my mom in Virginia, they wondered what I had against Virginia – though one fellow immediately saw the benefit of teasel-bombing D.C. :)  My mom is going to send us a couple of these decorations, so I'll be able to show the locals that teasel actually is good for something.  I'm betting that they won't find the argument persuasive, though!
Posted by Unknown at (permalink) 4:39 AM No comments:

The finder...  KLM Airlines (Holland) has turned the problem of lost items upside down.  When the airplane crew or cleaners find personal items left behind, a specially trained dog tracks down the owner in the terminal.  Being a dog, of course he does this by the scent.  Totally awesome!  I might leave something behind on purpose just to have the experience :)  Via my lovely bride, whom I hope to see in not too many days!
Posted by Unknown at (permalink) 4:31 AM No comments: