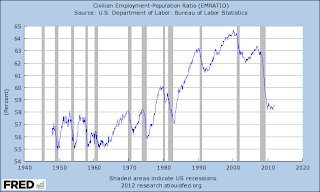 The graph at right shows the ratio of civilian employment to total population, over time.  You can see that in the current recession this ratio fell faster and further than in any other recession since 1948.  Bad, right?

Not so fast.  There are two classic games being played here.

First, why did the author of this graph pick 1948 as the starting point?  This leaves out the Great Depression, which would have looked pretty bad on here.

I don't have the raw data, so I can't re-graph it for you.  But trust me...this is a very misleading graph.  The current recession is bad, no doubt about it – but it is not quite the calamity implied by this “cleverly” drawn graph...
Posted by Unknown at (permalink) 3:10 AM No comments: