Grill cabinet update...  Bottom line: progress!  As I write this, all three frames are complete and test-fitted to the grill components.  Everything fit, proving once again that measuring actually works! :)  I got delayed a bit yesterday by the need to mow down about 2.5 acres of weeds.  That was made worse by the fact that my mower died about 3/4 through the job – had to borrow my neighbor's mower to finish the job.  This morning I ran that broken mower up to the service facility and  bought the remaining lumber I need for the cabinets – along with about a zillion screws and two gallons of marine varnish.  This afternoon I'll be putting plywood tops on the cabinet units: first a 3/4" thick top, then a 1/2" thick piece over that.  The 3 cm thick granite we bought for the top requires this much plywood as underlayment.

The photos below show work from yesterday and the day before.  The first photo is at the request of a reader who wanted to see the pocket screw hole jig in action.  Once I clamp the board into the jig, I just drill down until the stop on the drill bit hits the jig, and voila! – the pocket screw hole is done.  In the second and third photos you can see what those holes look like.  The fourth photo shows my original clamping technique for installing the 45° braces – and the next photo shows my slightly more refined (and much better!) current technique.  Finally there's the last two frames after I finished them. 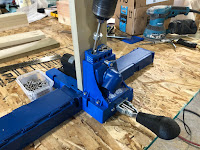 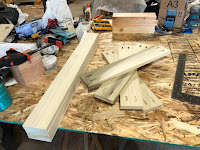 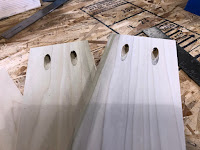 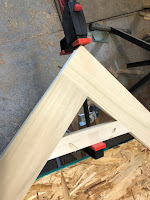 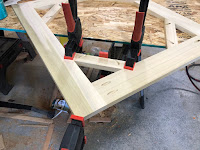 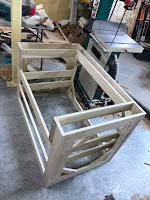 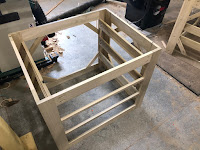 Now I'm headed down to cut plywood for the tops...
Posted by Unknown at (permalink) 12:15 PM No comments:

A mangy moose!  And a lot of other wildlife – that's what Debbie and I saw on our outing to Blacksmith Fork Canyon last night.  I took a couple less-than-superb photos with my iPhone: 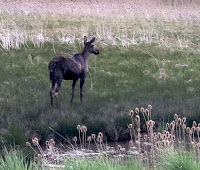 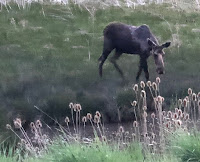 We did not expect to see a moose on the canyon bottom in the springtime.  Our own experience, plus the wisdom of many locals, tell us that the moose decamp to higher altitudes when the winter is over.  Not this one!  She had big patches of fur missing, with her black skin showing through.  From reading, this is most likely the result of a “winter tick” infestation, although it actually could be mange.  Other than the skin condition, she looked healthy enough, and certainly well-fed.

In addition to the moose, we also saw about six bazillion deer – including one herd of eight who tried to commit suicide by running in front of our car.  We stopped in time, and in the process learned just how fast a Tesla Model X can stop: really fast!  We saw lots of birds: several separate viewings of American dippers, a northern harrier, a single female turkey (weird, that, as they're basically always in a flock), a male Bullock's oriole in full mating plumage, swarms of swallows (three different species), a male Lazuli bunting, and several banded kingfishers.  The most interesting sighting was a bird we think is one of several sandpiper species.  We didn't have our Sibley's with us, and by the time we got home our memories were fuzzy. 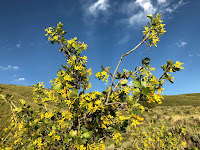 There were many of the shrub at right in bloom along the road.  I don't know what it is, but they grow up to about 15' in height.  The flowers have a mild, earthy, and very pleasant smell – not sweet at all.  There were hundred of bees on this small specimen I photographed – must be a good source of nectar... 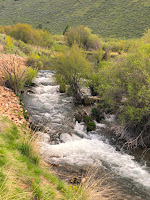 The stream at left is a fork from Blacksmith Fork River, coming from the south.  It's running a little bit higher than usual, making all the rapids and waterfalls noisy and beautiful...

It was a great evening's outing!
Posted by Unknown at (permalink) 11:24 AM No comments: