From National Geographic, the photo of the month (click to enlarge).  I'd love to see this in person...

Once again I am gobsmacked by both the technical skill and the artistry of National Geographic's photographers.  I can only dream of taking a photograph like this; those folks actually do it...
Posted by Unknown at (permalink) 6:33 AM No comments:

A Next Big Thing?

OpenFlow just got an absolutely enormous (and convincing) endorsement...
Posted by Unknown at (permalink) 6:26 AM No comments:

From Larry Ellison, CEO of Oracle:
I don't know.
So sayeth “the Larry”, in response to this question: “Is the Java programming langauge free?”

Portraits of Our Sun... 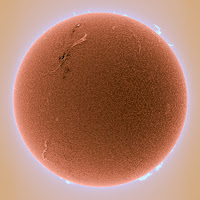 A fantastic collection of astrophotos of our sun, by Alan Friedman.  Much, much more at his blog, Averted Imagination.
Posted by Unknown at (permalink) 6:22 AM No comments:

Some great photos here...
Posted by Unknown at (permalink) 6:13 AM No comments:

Warren Meyer at CoyoteBlog weighs in on one of my pet frustrations:


In a reasonably sane world, and in all other contexts outside of health care, insurance is obtained at relatively low prices to cover only catastrophic events that would be potentially bankrupting. Car insurance does not cover oil changes and home insurance does not cover oven repairs. So why is it that Drum is arguing that we should ban insurance policies that only cover catastrophic losses and not routine costs? After all, the second sentence in the first paragraph from the LA Times sure seems to define exactly what insurance should be (and is similar to my personal policy, which has a high deductible attached to a health savings account).

Some of us are old enough to remember when health insurance was sold exactly like this in the U.S.  You bought a “major medical” policy to insure you against the catastrophic expenses, and the rest of the health care costs were out-of-pocket.  The currently conventional notion of healthcare “insurance” isn't actually insurance at all – instead, it's a bubble of socialism living inside our nominally capitalist society (I say nominally because we've managed to regulate capitalism into something that's a hybrid between capitalism and socialism, and highly variable across various market segments).

It's fascinating to think about how our current form of healthcare “insurance” distorts consumer behavior.  Consider this scenario.  Imagine that you were working out in your yard, and in some accident you got a 2 inch long gash in your arm.  It's bleeding, and it hurts, but it's obviously not life-threatening.

First scenario: you have healthcare insurance through your employer, as most Americans today do.  Without even thinking about it, most people will call their general practitioner to make an appointment, or go to an urgent care facility.  Cost to you: perhaps a $10 “co-pay”.  Cost to the insurance company: $500 to $1,000, depending on exactly where you went and what services were rendered.  Who pays that cost?  You do, in the end: your employer is paying directly, but your employer's cost is money that would have been in your salary if your employer didn't have this expense.  Even if you don't believe that (though it's easy to prove), you'll pay for it anyway: your employer, like all employers, will recover this cost through increased prices for goods and services – which we all pay.  Obamacare is an extreme version of this scenario.

Second scenario: you have a major medical policy (which this injury isn't covered by), and otherwise you're on your own for major medical expenses.  You will think hard about how to handle this, and you'll make a considered choice: either you'll go to the doctor or urgent care (and pay that expense out-of-pocket), or you'll go to the pharmacy and get yourself a supply of butterfly bandages, or some glue (which is likely what the doctor would use), and some topical antibiotics.  I know what I would do: I'd wash the wound carefully (it's really not that hard, folks), dry it, hold the edges together, apply some glue, perhaps slap a protective bandage over it, and I'd keep mowing the yard.  My expenses would be a few dollars at most.  The most important element: I'd be thinking like a consumer, and adjusting my purchases to match what I'm willing to pay.  That's the element that's missing with today's healthcare “insurance”, and it's distorting the consumption of healthcare in a way that drastically drives up its cost...
Posted by Unknown at (permalink) 6:08 AM No comments: