Obamacare and the Doctor...

Here's a well-known physician's take on Obamacare.  Dr. Zane Pollard is a pediatric ophthalmologist in Atlanta, Georgia.  Via my mom:


I have taken care of Medicaid patients for 35 years while representing the only pediatric ophthalmology group left in Atlanta, Georgia that accepts Medicaid. For example, in the past 6 months I have cared for three young children on Medicaid who had corneal ulcers. This is a potentially blinding situation because if the cornea perforates from the infection, almost surely blindness will occur. In all three cases the antibiotic needed for the eradication of the infection was not on the approved Medicaid list.

Each time I was told to fax Medicaid for the approval forms, which I did. Within 48 hours the form came back to me which was sent in immediately via fax, and I was told that I would have my answer in 10 days. Of course by then each child would have been blind in the eye.

Each time the request came back denied. All three times I personally provided the antibiotic for  each patient which was not on the Medicaid approved  list. Get the point -- rationing of care.

Over the past 35 years I have cared for over 1000 children born with congenital cataracts. In older children and in adults the vision is rehabilitated with an intraocular lens. In newborns we use contact lenses which are very expensive. It takes Medicaid over one year to approve a contact lens post  cataract surgery. By that time a successful anatomical operation is wasted as the child will be close to blind from a lack of focusing for so long a period of time.

It's what Britain and Canada are living with every day...
Posted by Unknown at (permalink) 4:24 AM No comments:

Thomas Freidman is a columnist for the New York Times, writing with a predictably liberal slant.  It's rare for me to agree with him on substance, though I've enjoyed his writing style and cherish him as a level-headed source of information about the liberal mindset.

So it was with great surprise that I read his column about the award of the Nobel Peace prize to Obama.  It's a terrific piece that I think is one of the better reactions any commentator has had.  A sample:


Here is the speech I hope he will give:

“Let me begin by thanking the Nobel committee for awarding me this prize, the highest award to which any statesman can aspire. As I said on the day it was announced, ‘I do not feel that I deserve to be in the company of so many of the transformative figures who’ve been honored by this prize.’ Therefore, upon reflection, I cannot accept this award on my behalf at all.

“But I will accept it on behalf of the most important peacekeepers in the world for the last century — the men and women of the U.S. Army, Navy, Air Force and Marine Corps.

“I will accept this award on behalf of the American soldiers who stand guard today at outposts in the mountains and deserts of Afghanistan to give that country, and particularly its women and girls, a chance to live a decent life free from the Taliban’s religious totalitarianism.


But don't miss the whole thing (even if it is at the New York Times).

Nice work, Mr. Freidman!
Posted by Unknown at (permalink) 4:14 AM No comments: 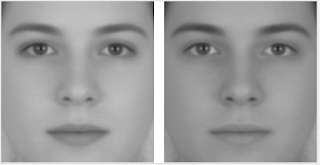 Look at the photos on the right.  One of them is a girl, the other a boy, right?

They're both photos of the same person.  The one on the left has had its contrast enhanced.  Our brains turn that little bit of information into a cue about gender.

That's one I never would have thought of...
Posted by Unknown at (permalink) 4:06 AM No comments: