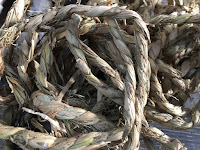 CarveZilla update...  The first parts for mine arrived today: the rails for the X-axis carriage and the Y-axis carriage (photos below).  These are all 6' long (to allow us a 4' square working area), and are steel rods supported along their entire length.  Linear bearings with recirculating balls will hold the carriages.  We bought these from a source in China for about a quarter the cost of U.S. or Japanese sources.  We'll see how well they actually work out, but just moving them by hand they feel smooth as silk.  For that sort of price advantage, we figured it was worth taking a risk. These were packed quite nicely: wrapped in plastic, then the “rope” shown at right, then a layer of a sort of plastic burlap, another layer of plastic, a layer of thick, tough paper, and a final layer of plastic.  They arrived here from Shanghai in perfect shape.  That rope is interesting.  At first blush I thought it was sisal, but on closer inspection it appeared to be made out of grass leaves.  I did some research on it, and found that it's more likely made of bamboo leaves – that material is commonly used for cushioning sharp metal edges in Asia, as it's both relatively soft and very tough.  I can vouch for the latter: cutting it was far more challenging for my knife than sisal rope would have been... 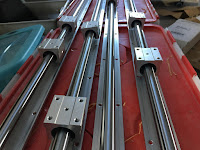 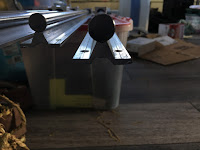 Posted by Unknown at (permalink) 1:09 PM No comments: 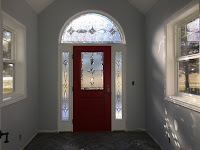 Construction progress...  Our projects are still putt-putting along, though at a much-reduced pace through the holidays and nasty weather.  Our mud room is currently the most nearly finished – the photo at right is a view of its inside, as seen from our entranceway looking south toward the front door.  We're pretty happy with how it turned out.  The finished room will look quite different, however, as there will be cabinetry along both sides of the room (left and right in the photo). 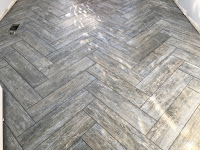 The tile guys were here this morning.  They grouted the mud room tile (photo at left), made a perfectly rectangular hole for me to cut a threshold for (for the door between the entranceway and the mud room), and repaired the broken tiles in the kitchen (from the installation of the door to the deck a month ago).  They did a great job on all parts of it.  Now we're waiting for tile to come in so they can finish our sun room.  We have no ETA, unfortunately...
Posted by Unknown at (permalink) 12:53 PM No comments: 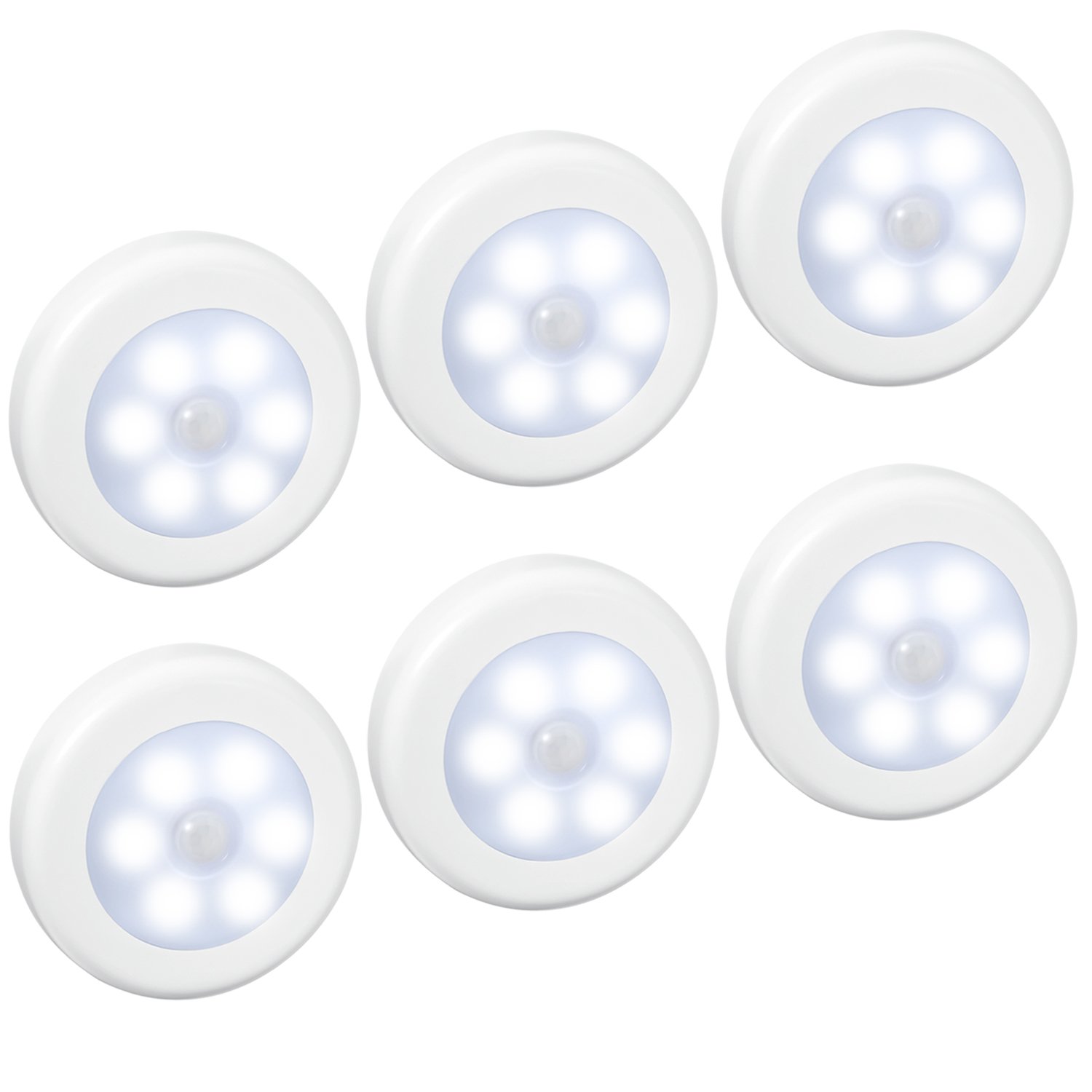 Product updates...  About a week ago I received six small LED lights that are powered by three AAA batteries (each, of course) and contain a motion sensor.  These had great reviews on Amazon, though some people reported problems with the motion sensor part, and the photocell that keeps them off during daylight.  But for the price ($23.99 for all six, or just $4 each) I figured I wasn't risking much.  Well, I have no idea what the complaints are about!  For me, they work absolutely perfectly.  I used all six to light the stairwell leading from the first floor of my barn to the second floor, and the path through the second floor storage area to my office.  In the early morning when it's pitch black outside, they come on exactly when I need them, and turn off about 10 seconds after I pass them.  They provide plenty of light for me to walk safely, and I no longer have to fumble around with my phone's flashlight mode.  Win!

We've had our new dishwasher now for a couple of months, and if anything our opinion of it has gone up.  Our biggest complaint is that we often accidentally open it while it's running, because we didn't hear it.  The dishes and silverware consistently come out sparkly clean and free of spots, except for those few occasions when we forgot to put soap in, or to refill the rinse agent dispenser.  We've never tried any setting other than the recommended “auto” mode, as it seems to do a perfect job each and every time.  We find the rack arrangements to be quite convenient, and certainly a lot better than any other dishwasher we've ever owned.  The cutlery tray is still our favorite feature – such a silly little thing, but it sure saves a lot of hassle.  The price is steep, for sure – but we'd unhesitatingly recommend this unit to anyone who can afford it.
Posted by Unknown at (permalink) 8:52 AM No comments:

Paradise ponders, whining old man edition...  Man, just about everything went wrong yesterday!  A Fedex package I was expecting never showed up.  The tile contractors who were supposed to be here in the afternoon never came.  There was nothing in the mail – not even junk mail.  The dogs escaped my attempt to capture them on the way in from outside, and I spent a half hour cleaning up mud.  Twice I left things in the house that I needed in the barn, and had to make a return trip.  I got almost no sleep.  Sheesh!

I did have an excellent steak dinner, cooked by my lovely bride.  That was definitely the highlight of the day.  We had a relaxing evening reading in front of the fireplace, too...

Hopefully things will go a tad better today...
Posted by Unknown at (permalink) 6:40 AM No comments: Stop. Trying. To. Make. Me. Like. Him!  Part 21...  Yesterday came the (much anticipated) official news that Trump is going to nominate General James “Mad Dog” Mattis as his Secretary of Defense.  I first became aware of Mattis in 2003, during the first Iraq War, when he commanded the Marines invading Kuwait to throw Saddam Hussein's army out.  He was one of the figures whose leadership I most admired.  One thing I learned about him that I really liked: he's an avid student of history, widely and deeply reading both political and military history.  He's famous for being deeply knowledgeable about the history of the Middle East.  His clear-eyed (and long held) view of the dangers posed by Iran as a state actor are extremely refreshing when compared to the spineless posturing of the Obama administration.  Intermittently since 2003 he's been in the news, always taking a position that I already supported, or came to support in part after reading what he had to say.  He's also been a prominent character in all the histories and reporting on Middle East conflicts since 2003.

It never occurred to me that Trump might nominate such a solid, well-qualified candidate – either for Secretary of Defense or any other post.  His doing so nurtures the tiniest little flame of hope in me.  If there was anybody who might successfully guide the Department of Defense through the mess that is the Middle East, this would be the guy.  I'm stunned that Trump made such a great choice.  Stunned in a good way, too...

I'm not alone in this assessment.  One of the commentators I respect, on military affairs in general and the Middle East in particular, is Ralph Peters.  Here's his fawning approval of the Mattis appointment.  If you're not familiar with Peters, let me assure you that this article's style is not his normal style: he's more of the bite-your-head-off critic in most cases, of the kind with lots of those pesky facts at his disposal.  Peters was a vocal critic of Trump during the campaign.  It's notable that his approval of Mattis is, so far as I can discern, completely unqualified.  He must be sharing some of my feelings right about now. :)

If you aren't familiar with Mattis, it's worth your time to get to know him a bit.  He's famous for his pithy quotes, which are easy to find all over the web.  Wikipedia has a decent short-form biography.  If you search his name on Google, you'll find hundreds of articles that mention him.  For a more in-depth treatment, read any of the dozens of histories of conflict in the Middle East since 2000 – he'll be a prominent character in any of them.
Posted by Unknown at (permalink) 6:10 AM 1 comment: