A great day for a bonfire...

A great day for a bonfire...  It was cloudy and drizzly, exactly as forecast.  From a safety perspective, that's perfect weather for a big bonfire – no matter what happens, I wouldn't set the valley on fire. :)  I started the fire with a bit of packing material and a bag full of shredded documents (those burn hot!), and within 60 seconds of striking my first match I had a roaring fire going (first photo), despite the steady drizzle.  I worked steadily at this for about 3 hours, dumping 18 large forkfuls of brush on the fire.  Each one of those was over a cubic yard, compacted – I'd guess around 25 or 30 cubic yards of compressed brush in all.  The tractor did all the heavy lifting while at the same time keeping me at a comfortable distance from the fire.  That was one hot fire – so hot that I could see raindrops flashing into steam before they even hit the bonfire.  When it rained heavily (which it did only briefly), that steam made a sort of dome around the fire.  As I write this the fire is down to the last embers.  I've spread it out over 100 square feet or so to cool.  Done! 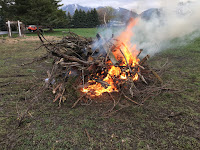 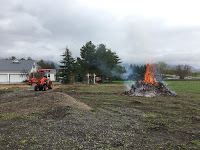 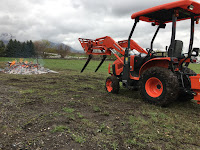 Posted by Unknown at (permalink) 2:02 PM No comments:

Paradise ponders, all banged up and blackberries edition...

Paradise ponders, all banged up and blackberries edition...  The area where I live is a big berry growing area, and the biggest of the berry farms is a mile from our house.  When they're in season it would be hard to beat our local berries.  But they're certainly not in season right now, so when I read this Neoneocon post about wonderful fresh blackberries at (of all places!) Walmart, I knew I'd have to try them.

She was talking about blackberries by Driscoll's, a company that grows blackberries in Mexico and is working hard to improve them.  More on their genetic work here.  And if you, like me, had no idea what a °Bx is, here's an explanation (it's sugar content, basically).

So yesterday we were in our local Walmart, and Debbie thought to check the produce counter.  The Driscoll's berries were there!  I bought two pints.  This morning I poured about a half pint into my morning muesli.  Heaven, I tell you.  Heaven.  Heaven is Rosehill's decadent Creamline milk on Bob's Red Mill muesli with Driscoll's blackberries generously mixed in.  That's it, exactly!

For the past year, our two crate-trained puppies (Cabo and Mako) have been getting old, mangled towels as their bedding material.  We started out with an actual dog bed for them, but they shredded them within seconds.  So old dead towels has been their fate.  Yesterday we decided to try them with beds again, so we hied ourselves to Walmart and bought a couple of inexpensive, washable stuffed beds for them.  Last night was the first experiment.  Two things happened, both of them good.  First thing: the beds survived unscathed.  Second thing: the puppies did not wake us at two or three AM, as has been their wont.  Instead, we slept in until almost eight AM.  If you know us, then you know that's like normal people sleeping in until two PM or so. :)  That was the most restful night's sleep I've had in quite a few months, and no drugs or alcohol was involved.  Could be a coincidence ... but it could be those beds.  Oh, how I hope it's the beds!

I worked on the sun room stairs most of yesterday.  The first part of the day was sanding: 60, 80, and 100 grit on the belt sander, then 220 grit on the random orbital sander.  By the time I was done with that, you could have used the surface of those stairs as a mirror.  Then, per my lovely bride's instructions, I purposefully ruined it.  :)  What she really wanted for those stairs was reclaimed wood, but obtaining pieces of a suitable species of reclaimed wood in the desired dimensions would have been both challenging and outrageously expensive.  So I'm “manufacturing” some simulated reclaimed wood through a process of prolonged beatings and some creative finishing.  Yesterday was the beatings part.

In the first photo below you can see most of my basic tools: a fairly random collection of clean hardware, and a polyurethane-and-lead-shot dead blow hammer.  The dead blow hammer is much easier to control than an ordinary hammer, and the relatively soft head splatters the hardware much less.  I also used one other tool, not pictured: a small (5 ounce) ball peen hammer, to make some dents.

I got into a very mechanical, repetitive mode while doing this: hammering with my right hand while randomly moving the hardware about with my left.  Every 60 seconds or so I stopped and collected splattered hardware off the floor, which also gave my right arm a bit of a break.  Altogether I spent about three hours hammering away, and in the last photo you can see a closeup of the results.  It's enough to make a grown woodworker cry, with that beautiful hunk of redwood wrecked... 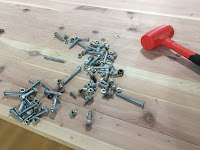 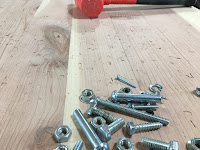 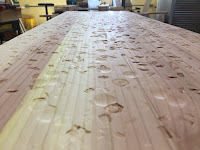 The next step is bleaching, with a two-part bleach system of sodium hydroxide and hydrogen peroxide.  That work needs to be done outdoors, and today (with gloomy skies rain in our forecast) is not the day for that.  So today I will be burning the giant pile of brush I collected last year.  I got my burn permit (online here, instantly delivered, and free – so different than California!) and I'm all ready to go...
Posted by Unknown at (permalink) 8:46 AM No comments: