Scene on a Saturday Morning in Lawson Valley...

me: in the kitchen, making my tea

Debbie: “Maka Lea is sitting on the cat tree, puking!” (Maka Lea is one of our cats)

Debbie: “Race is cleaning it up.” (Race is our two-year old Border Collie)

me: 10 minutes later, passing by the cat tree; the carpet is spotless
Posted by Unknown at (permalink) 10:49 AM No comments: 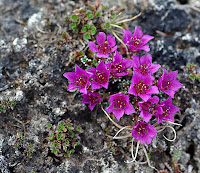 Saxifraga oppositifolia, courtesy of the UBC Botanical Garden (click to enlarge).  If you love plants and flowers, I promise you there's no email you will look forward to as much as their daily Botany Photo of the Day.  Go sign up, it's free!
Posted by Unknown at (permalink) 10:28 AM No comments:

In Response to a Reader Who Wants to Remain Anonymous...

But not at what you thought I was pissed off at.

I'm not angry with our elected representives – for the most part (and this is true of Obama in particular) they're just doing what they said they were going to do.

I'm angry with the fucking retarded electorate who chose these bozos that are threatening my country and my personal liberty, not to mention my health and wealth.  I'm really pissed off at them!
Posted by Unknown at (permalink) 10:22 AM No comments:

Many are the ways in which our miserable, correctness-besotted educational system fail our students.  Today I read about yet another one, new to me...
Posted by Unknown at (permalink) 10:12 AM No comments:

But the document they didn't want you to read can be found here...
Posted by Unknown at (permalink) 10:04 AM No comments:

The Consequences of Obamacare...

Basically it's going to make us into another stifling, oppressive, European-style nanny state.  And steal our money along the way, while dooming our children to a future of penury...

Obamacare has got to go, or ... we won't have a country left that's recognizable as America.  What's happened to personal liberty, self-reliance, and personal responsibility?  We might as well change our name to the “The United Wimps and Government Tit-Suckers”. Or something akin.

Are you pissed off yet, Americans (meaning those of you not already attached to the government tit)?  You damn well ought to be – because your elected representatives just fired a huge insult at you, and then spit in your face.  Next their hobnailed boots will tread on you, to destroy what tiny bit of American spirit remains...
Posted by Unknown at (permalink) 10:01 AM No comments:

I do not approve of such actions, though I fully understand the emotions underlying them.

On a related note, I note with some encouragement that of late in metropolitan San Diego (and on the freeways), Obama stickers are far less in evidence now than they were a year ago.  Last January I noted that Obama stickers outnumbered Bush plus McCain stickers by something like four to one.  These days I think it may actually be true that Bush stickers (haven't seen a McCain sticker for a while) outnumber Obama stickers.  There are many cars showing the evidence of sloppily removed stickers.  I see many more cars with “Miss me yet?” stickers and “Don't Tread On Me” flags.  And in lunch break conversations, I haven't heard anybody who is happy with Obama for a couple of months now.

I have this fantasy that a couple of years from now we're going to look back at November 2010 as “The Great Comeuppance”.  Lordy, I hope that comes to pass...
Posted by Unknown at (permalink) 9:35 AM No comments:

Business IT projects are notorious for being poorly managed, late, and over-budget, and for delivering something other than what was actually needed.  But if you want something done spectacularly badly – like 100 orangutans building a skyscraper – leave it to the government.

You know, those folks who will soon be running your medical care.  Doesn't that make you feel better, now?
Posted by Unknown at (permalink) 9:28 AM No comments:

Southwest: The Rocket Scientist of Airlines...

There's a reason (lots of them, actually) why Southwest is one of the very few profitable domestic American airlines.  Here's one of them, nicely explained.
Posted by Unknown at (permalink) 9:22 AM No comments:

What the Drug War is Doing To Us...

Philip Caputo (in the Atlantic) looks at The Fall of Mexico.  As you read it, consider how much of this carnage would simply disappear if drugs were legalized...
Posted by Unknown at (permalink) 9:20 AM No comments:

WSJ has a nice piece on what happens when North Korea (inevitably) collapses...
Posted by Unknown at (permalink) 9:17 AM No comments:

Not Worth the Paper It's Printed On...

Your tax dollars at work.  Are you pissed off yet?
Posted by Unknown at (permalink) 9:16 AM No comments:

Pachauri Apologizes, But Hangs In There...

Damned bureaucrat, clinging to his cushy job...
Posted by Unknown at (permalink) 9:13 AM No comments:

My mom forwarded me this email she'd received:


An idea whose time has come.

For too long we have been too complacent about the workings of Congress. Many citizens had no idea that members of Congress could retire with the same pay after only one term, that they didn't pay into Social Security, that they specifically exempted themselves from many of the laws they have passed (such as being exempt from any fear of prosecution for sexual harassment) while ordinary citizens must live under those laws. The latest is to exempt themselves from the Healthcare Reform that is being considered...in all of its forms. Somehow, that doesn't seem logical. We do not have an elite that is above the law. I truly don't care if they are Democrat, Republican, Independent or whatever. The self-serving must stop. This is a good way to do that. It is an idea whose time has come.

Have each person contact a minimum of Twenty people on their Address list, in turn ask each of those to do likewise..

In three days, most people in The United States of America will have the message. This is one proposal that really should be passed around.

While the sentiment expressed in the actual amendment language is something that resonates with nearly anyone, the rest of the email is largely a bunch of bull.  To the best of my knowledge, this proposed 28th amendment (there are dozens of others) hasn't been formally proposed in any venue.

Personally I don't think this issue rises to the level of a Constitutional Amendment – there's only one reason why this couldn't be done as law (or even as a matter of Congressional procedure) is that our elected representatives refuse to do it.  And we have a cure for that – throw the bums out!!!
Posted by Unknown at (permalink) 9:10 AM No comments:

No need to thank me. I am just helping you expand your education!

Posted by Unknown at (permalink) 8:49 AM No comments:

Jeff Goldstein is one very edgy writer, and a strong advocate of our freedom of speech.  Amongst the many people he studied under is a creative writing professor named Brian Kiteley (at the University of Denver).  To Jeff's great surprise and dismay, Kiteley objects to his writing, and doesn't want the world to know that Jeff studied under him.

The creative writing professor apparently doesn't want it known that one of his students is, err, a creative writer.  And he wants to censor Jeff.  WTF?

Read Jeff tear him a new one...
Posted by Unknown at (permalink) 8:34 AM No comments: