Seen on Facebook...  Via my lovely bride.  I found it for sale here (on a site I know nothing about).  This could be a big seller around here! 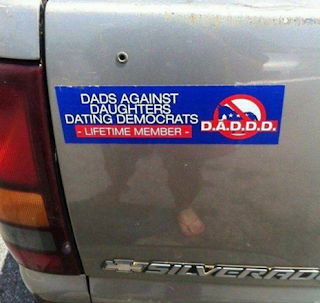 Posted by Unknown at (permalink) 1:00 PM No comments:

Dell, crapware, and Windows 10...  My friend and neighbor Tim D. recently bought a new computer.  He chose an inexpensive Dell model sold through Walmart.  Shortly after he bought it, he called me for some help: his new computer was vastly slower than the one it replaced, and he basically had no idea how to do anything.

So I ran over to his house, delighted to be able to do something to help repay him for the weeks of assistance he gave me in the past couple of years.  I had no idea what to expect.

First thing I saw was that the Windows 10 screen was like some alien thing had taken over his computer.  I haven't used Windows for nearly 10 years now, but I expected to see at least something recognizable.  There really wasn't much!  Everything seemed to have new icons, new names, and new places on the screen.  Those bits and pieces of Windows lore that I could dredge up were largely useless.  If it's that alien for someone like me, who has lived and breathed computers for almost 50 years – imagine what it's like for a non-techie who has no understanding of the technology and uses computers only casually!  Poor Tim was completely and totally lost – and I wasn't much help until I did some online reading to figure out a few basic things.

Then there was the crapware.  If you're not familiar with the term, here's the Wikipedia article.  This stuff isn't on every new computer (it's not on Macs at all, for example), but it's on nearly every low-cost Windows machine.  Dell has a reputation for being amongst the worst crapware offenders, and after seeing Tim's computer I can understand how they got this reputation.

Some of the crapware is “opt-in”, meaning that you have to install it before it does anything.  Most of it, though, was pre-installed – very, very annoying.  Worst of all was a malignant piece of crapware called NowUSeeIt Player: it was not only pre-installed, but it came with no uninstall program.  I call it “malignant” because it was putting up dozens of pop-over ads per hour.  Most of these were for bogus “security programs” that had scary-sounding (and looking) screens that tried hard to look like a Windows error screen.  They tried to scare the viewer into calling (with their credit card ready!) a company that really was just a front, would do nothing to help your computer, but would take some money out of your credit card account.  Probably they'd steal your credit card number, too!

Altogether, over the course of about four visits with Tim, I probably spent 5 or 6 hours cleaning his crapware-infested brand new computer.  A non-technical person would have been there much longer, and might not have succeeded at all.  That's just awful on Dell's part (it was their choice to earn a few bucks per machine by installing this horrible stuff).  I'm sure they don't care, but ... though I've often recommended Dell to people in the past (and bought quite a few of them myself), I will no longer do so.  In fact, I will actively recommend against Dell until I can satisfy myself that they've dispensed with the crapware.

I did have one piece of this experience that made me chuckle.  I found a guide on the Internet somewhere that described how one could get rid of NowUSeeIt Player even though it had no uninstaller.  Mainly it involved deleting registry keys (The “registry” is a uniquely Microsoft invention that is mostly horrible).  I had no idea how to do that on Windows 10, but I imagined it was some new tool, with a new name, that worked completely differently than the old tool.  That led to the chuckle.  There's no new tool.  You just use RegEdit, the same tool one used on the earliest versions of Windows.  So far as I could tell, there was nothing new or improved about this notoriously awful tool.  Using RegEdit is roughly akin to being force to hammer in a nail by using your pen knife, with the blade as the handle.  Tim and I tediously deleted the 100 or so registry keys that the NowUSeeIt Player installs, and afterwards his computer was (a) blessedly free of those incredibly annoying pop-over ads, and (b) at least three times faster than it had been.

Dell, you should be ashamed of yourselves.  You owe your customers a heartfelt apology, at the very least.  You really should find a way to compensate them for the tortures you've visited upon them, too.  Along with their geekly friends who have gotten them free of your crapware!
Posted by Unknown at (permalink) 12:18 PM No comments:

Taxes...  Man, I hate this time of year, when I have to sit down and spend hours torturing myself as I calculate how much money I have to give our government – which it will promptly spend mostly in ways that I find abhorrent.  Not fun.  Since I retired a few years ago, this tax computation has gotten worse – the tax consequences of living off your investments are way more complicated than living from a paycheck that's had taxes withheld.

Last year was the worst of all for us, as the 2014 tax year was complicated by our moving from one state (California) to another (Utah), owning two homes most of the year, major investments changes, etc.  This year was considerably simpler, and the tax software I use (TurboTax) surprised me by making something else much simpler: for the first time it automatically imported all the tax data about my stock trades from my broker.  Even the basis (price I paid) was correctly imported.  This saved a lot of manual lookup and typing.  Bottom line: I did our tax return in just a few hours this year, instead of the several days I was anticipating.  That, at least, is a positive thing.

But I still have to let them steal my money and waste it on something stupid (or worse), and that really grates on me.  Argh!
Posted by Unknown at (permalink) 10:21 AM No comments:

More memory memories...  This article discusses several old computer memory technologies.  Most of these are things that I actually worked with back in the '70s when I was in the U.S. Navy: magnetic drums, Williams tubes, mercury acoustic delay lines, and magnetic core memories.  I also worked with a couple others not mentioned here: electrostatic dots and steel wire acoustic delay lines (photo at right, not mine).

PEX rules!  What is PEX, you ask?  It's a (relatively) new technology for plumbing, one that's now nearly the universal way plumbers use when plumbing a house.  Wikipedia has a good article about it.  The photo at right (not mine) shows a typical PEX connector (the brass fitting), PEX tubing (the semi-transparent tubing), cinch clamp (the silver strap around the tubing near the brass fitting), and the crimp cinch tool (the big tool working on the clamp).

I was at my brother's cabin yesterday, installing a new pressure tank for his water system.  The old water tank was a teensy 2 gallon job that was mounted right on the wall, directly threaded into some copper pipe.  The one I installed was a 20 gallon, floor-standing tank.  We had to run about 6 feet of pipe between the old tank's mount and the new tank.  If I had run copper pipe, I'd have had to cut four pieces of pipe to precisely the right length, plus three 90° elbows and two solder-to-threaded adapters for the ends.  I'd have needed a box full of tools, probably five or six hours, and an enlarged cussing vocabulary to cover all the mistakes I made.  Plus it would most likely have leaked the first three times I tried it.

What a difference with PEX!  Because it's quite flexible, I only needed two fittings: adapters to threaded pipe at each end.  I only needed one piece of pipe, and no elbows.  Cutting the pipe was as easy as using a pair of scissors – the cutting tool slices right though the pipe like scissors on paper.  I'd never used PEX before, so I wasn't sure how hard it would be to use the crimp cinch clamp tool.  Turns out it's about as challenging as a pair of pliers.  You just put the tool onto the clamp and squeeze – you're done!  Then when I turned everything back on, it didn't leak a drop.  Total time was about 30 minutes, and most of that was just me being careful with techniques that were new to me.

Count me as a new PEX advocate.  I'm actually thinking about re-plumbing the mechanical room of our house.  The current setup is an incrementally-installed copper pipe mess.  I sometimes have to study the pipes for fifteen minutes just to figure out which of the maze of valves I need to turn on or off.  With PEX I could easily make a manifold-based system with individual valves for every water destination...
Posted by Unknown at (permalink) 7:12 AM No comments: