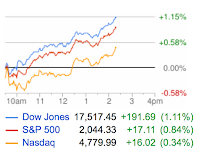 I love it when ... I check the market and find a graph like this!
Posted by Unknown at (permalink) 11:27 AM No comments:

Strange mail of the day...

Strange mail of the day...  This is something we just received via the U.S. Post Office.  It's most definitely not something we solicited.  There's no indication on it (at least, none that I can find) of who sent it.  There's nothing scary about the advice on it; it's basic “get ready for disaster” sort of things, except that they left out arming yourself (something that is usually part of the “prepper” dogma).  I'm left uncertain about the motives of the sender.

All that was surprising enough.  What I find even more surprising is that I can't find this text online!  It's not often I do a Google search and get zero results!

Anybody recognize this (click to embiggen), and can tell me who sent it and why? 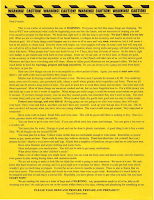 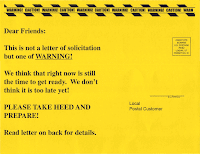 Where to eat lunch in Logan...

Where to eat lunch in Logan...  This is another in a series of posts for the good folks who will be attending the Field Spaniel Society of America Nationals being held at the fairgrounds in Logan in May.

If you've been following this series, then you already know about the map we've made that shows all the places we've been talking about.  You might also notice that today's list of lunch places only has one new place on it – we've already talked a bit about all the rest!

Logan's Heroes is the place we haven't mentioned before.  It's a local institution, one of those places every local knows, and it's an easy walk from the fairgrounds.  At lunch time the small dining area is generally packed with locals – farmers, tradesmen, college students, and people who work nearby.  The menu isn't all that large, but we've yet to try a sandwich that wasn't great.  The bread is fresh and good, and the owner and his helpers are experts at making great sandwiches.  They're happy to accommodate any special things you want (or don't want!).  If you're allergic to waiting, it's better to go outside of the lunch rush – and even then you might want to do takeout, as there aren't many tables there.  The owner is a funny and interesting fellow, an Iranian immigrant who came here for college and stayed.  He has an amazing talent that we envy: he remembers people and their stories, even if it's been many months since he last saw you – greets you by name and picks up the conversation you were having last week or last year!

Angie's has an extensive traditional lunch menu, with all sorts of sandwiches, burgers, salads, and some fare like fried chicken and fish 'n chips.  Lots of locals go there for lunch, some (literally!) every day.  Nothing fancy, no high prices, but it's all good, solid food, and the people are friendly as can be.

Jack's Wood Fired Oven has great lunch specials, small pizzas with a bowl of soup.  Both of them can't be beat anywhere in the area.  Great desserts, too.  If you'd like a classy lunch that's a little different, Jack's is a great choice.

Herm's Inn is a little further afield, but if you're looking for a hearty sandwich or burger lunch, it's hard to beat.  You'll want to be really hungry before going there, though :)

Cafe Sabor has decent American-style Mexican food, with lots of choices for lunch.  It's within easy walking distance of the fairgrounds, too.  And yes, they have margaritas – though we're not sure it's a good idea to be drinking them at lunchtime if you have to show in the afternoon :)

Elements is the most upscale of the lunch eateries we're listing here, and it's in walking range of the fairgrounds for the swift of foot.  They've got all sorts of yummy lunch fare, some of it alcoholic.  They're a little pricier than the rest of the eateries here, so if you're watching your pennies you might want to look elsewhere.

The Crepery is within walking range of the fairgrounds, and has all sorts of interesting crepes for lunch.  It's often crowded during lunch hour, as it's a favorite haunt of local workers and college students.


And last, but certainly not least, is the Crumb Brothers cafe.  It's just a short walk from the fairgrounds, and has lots and lots of delicious pastries, breads, sandwiches, coffee (including espresso) and tea.  This is the place to go for a delicious light lunch in a cafe atmosphere!

Posted by Unknown at (permalink) 10:25 AM No comments:

Ant Flats Road is open!  Yesterday afternoon we made our first drive on the road to Ant Flats, which starts at the end of the road to Hardware Ranch.  This (very nice) dirt road was a haunt of ours last summer and fall, because of all the wildlife we routinely saw there.  The road is closed to cars all winter (it becomes a groomed snowmobile road), but reopened yesterday – and we were one of the first to drive it.

We had the road to ourselves for about 90 minutes, and we saw a lot of wildlife.  The standout was several large groups of deer, numbering well over 100 in total (we really didn't even try to count them, there were so many).  We saw one large group of elk, about a half mile south of Hardware Ranch.  Best of all: we saw one bald eagle feeding on a ridge top, and a pair of bald eagles wheeling overhead.

The water in the stream (the headwaters for Blacksmith Fork) were fairly high, because of the runoff and melt.  The Wasatch Mountain drainages are running well in general; the water forecasts for spring are all looking very good.  We were at Porcupine Reservoir twice in the past 10 days, and it had risen at least 6 feet between our two visits.  I don't think we're going to have water challenges this year...
Posted by Unknown at (permalink) 6:33 AM No comments:

Lanna needs a home...  This under-two-year old female Black Lab needs a home.  She's at the Cache Humane Society shelter, in the kennel we sponsor there.  Do you know anyone who needs a lovable addition to their home?
Posted by Unknown at (permalink) 6:26 AM No comments:

Science vs. everything else...

Science vs. everything else...  Via my pistol-packing, medical team entertaining mama:

Posted by Unknown at (permalink) 5:55 AM No comments:

Puppy update...  One of the puppies (the wheezing boy) died less than a day after he was born.  The other eight (five girls, three boys) are all thriving, and the mom is doing great.  The photo at right is from last night.

I'm going to have to teach our breeder the proper way to hold her iPhone when she takes photos :)

Yes, they're all brown (“liver” is the official term).  Some of them have white spots on their chests, like our Miki.

We still don't know whether we're getting one or two puppies from this litter.  That depends on how many other people are interested...
Posted by Unknown at (permalink) 5:45 AM No comments: