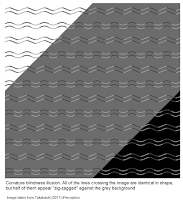 Best. Illusion. Evah!  This is a really powerful optical illusion.  All the lines in the image at right are sinusoidal curves.  Yes, even those lines that appear to be triangular.  Click the image to embiggen it, then put a ruler up against the “straight” lines.  They're curved exactly like the ones that appear curved!

Most illusions I can sort of “talk” myself into a state where the illusion disappears.  Not this one.  Much more on it here...
Posted by Unknown at (permalink) 8:23 AM No comments:

Snowflakes in action...  A group of Cambridge University students has created a database listing over 1,000 movies that contain scenes of rape, abuse, and sexual harassment.  Their objective was to allow sexual assault survivors to vet what they watch.  A laudable enough goal, though I do wonder whether it's actually a good idea for assault victims to avoid exposure to fictional depictions of things which actually do occur in the real world.  The whole notion of “triggering” strikes me as questionable.

But that's not what caught my eye about the story above.  This did: in that database is the Christmas classic It's A Wonderful Life.  It's cited for a scene of a man chasing a housekeeper while insisting he's in love with her, and another where a woman is being ogled on the street.  Really!  If someone needs to be protected from scenes like that, how could they possibly function in the actual world?

I once read a science fiction story about a human society so uncomfortable with personal interactions that everyone lived alone, isolated, communicating with others only by means they found comfortable.  In the story, a person from a different society came along and basically conquered the world simply because he was willing to knock on doors and confront people face-to-face.  At the time I read this, perhaps 50 years ago, I thought the underlying notion quite far-fetched.  Maybe not...
Posted by Unknown at (permalink) 6:40 AM No comments:

Sisyphus table in action...  And a couple more photos.  The video at right shows the Sisyphus doing an “erase”; it's nearly finished.  The photos below show a few more patterns.

I've had a few questions asked about the table...  The patterns it makes are preprogrammed.  The device comes with a couple dozen patterns, and there is a community where people can share others.  It runs continuously, day and night, though the company says they have plans for a scheduler.  You can control the speed of the ball, and I have it running slowly to minimize the noise (which is nearly zero when slow).  You can make your own patterns simply by creating an SVG file with a single path.  Lots of graphics tools let you make SVG files, but what's most interesting to me is that it's easy to create them in software – they're just specially formatted XML files, which is an especially easy file format to create in a program... 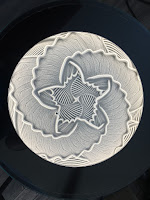 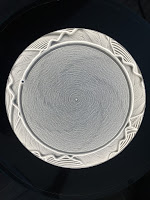 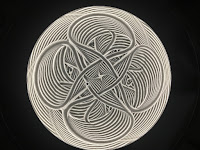 A fun morning ... is what we have in store.  We're headed first to the Christmas Wish Craft Boutique at the Box Elder County Fairgrounds, then to lunch at The Grille in Tremonton.  I suspect we will be returning with a bunch of craft stuff.  :)
Posted by Unknown at (permalink) 5:43 AM No comments: