A prayer...  Via my mom, who hasn't been near a church in a long, long time, so this must be from someone else:


In church I heard a lady in the pew next to me saying a prayer. It was so sweet and sincere that I just had to share it with you:

I just wanted you to know that my favorite politicians are Barack Obama, Joe Biden, Nancy Pelosi, and Harry Reid.

Posted by Unknown at (permalink) 10:35 AM No comments:

Profound thoughts...  From a collection my mom sent me.  This is one of her favorites.  The rest I'm saving for a slow day... 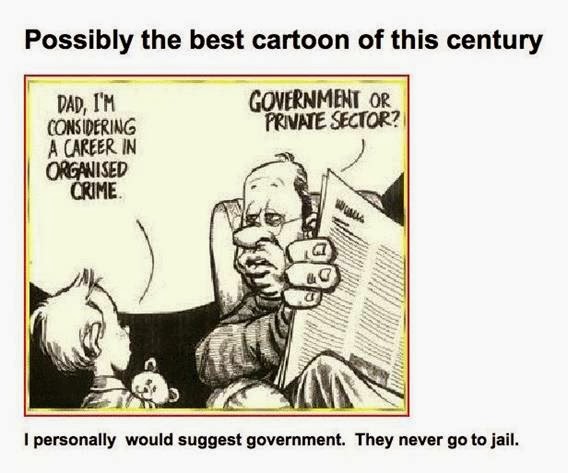 Posted by Unknown at (permalink) 9:23 AM No comments:

Porcupine meets pumpkin...  Via Kate at Small Dead Animals...
Posted by Unknown at (permalink) 9:21 AM No comments:

Cosplay... That's a new word – and a new phenomenon – for me.  I cannot explain it.  I think these people are all crazy, and not in a borderline crazy sort of way, but rather in a I-don't-want-to-get-too-close-to-them sort of way...
Posted by Unknown at (permalink) 9:19 AM No comments:

Dog faces and dog noses, oh my!
Posted by Unknown at (permalink) 9:14 AM No comments:

If only Stalin knew ... code.  Obama's revealing “tells” in his “apology”.

ObamaCare encourages divorce.  Is there anything ObamaCare can't do?

The ObamaCare IT is a security disaster.  Not just the website, though it is definitely a big part of the problem.

ObamaCare is causing a surge in MediCare enrollments.  If that keeps up, the already-shaky economic underpinnings for ObamaCare will completely disintegrate.  There's a long, complex story there with a simple summary: your taxes are going up.  A lot.

The Rise of the ObamaCare Scams.  As if ObamaCare weren't bad enough all by itself!

Posted by Unknown at (permalink) 9:13 AM No comments:

European anti-Semitism is on the rise...

European anti-Semitism is on the rise...  A survey of European Jews is the source for this assertion.

I saw a little of this on several of my trips to Europe, most especially when I traveled outside the major cities (as is my wont).  A couple of times (once in France, once in Italy) store clerks asked me if I was Jewish (I think because of my blond hair and beard, and my extra-large sized Scotch nose probably contributed).  In Italy, I queried the business associate I was traveling with – an Italian – about why someone would even ask such a thing.  He explained that had I replied in the affirmative, the store clerk would quite likely have asked me to leave the store, as they would be “ashamed” to have a Jew be seen there.  If I had refused to leave, most likely the clerk would refuse to serve me.  He went on to say that the local Jews (this was in Milan, and there is a local Jewish community there, with a number of synagogues) all knew which shops and restaurants they were unwelcome in – and that there were a lot of them.

Any Jew with even a cursory knowledge of 20th century European history should be very worried about this.  There are plenty of places they could go without such problems and their attendant risks...
Posted by Unknown at (permalink) 8:55 AM No comments:

Syrian activist wants Assad to win...  Because the alternative is an Islamic state, as the revolution has been taken over by al Qaeda.  The Middle East is such a muddled mess that it's rare for me to know who to root for.  The only real clarity I have is with respect to Israel – the rest of the countries there are so screwed up that I'm not optimistic about a “solution” ever being found...
Posted by Unknown at (permalink) 8:43 AM No comments:

I've never been to mainland China, and I don't know if I'll ever go – but some of the scenes here tempt me.  What I see here is at loggerheads with the China of my mind, which is formed by childhood impressions and an extensive reading of Chinese history through Nixon's visit.  The change in China within my own lifetime is stunning; nearly beyond belief.  When I was young, millions of Chinese died of starvation and privation, thanks to Mao's personality cult.  Now billions of Chinese are prospering, and yearning for more.  It's one of the world's most heartening stories, and it's still unfolding...
Posted by Unknown at (permalink) 8:40 AM No comments:

The Drift Toward Despotism...


At a time when over 4 million people have had their health insurance canceled, it’s good to know that some Americans can still access prompt medical treatment, even if they don’t want it. David Eckert was pulled over by police in Deming, N.M., for failing to come to a complete halt at a stop sign in the Walmart parking lot. He was asked to step out of the vehicle, and waited on the sidewalk. Officers decided that they didn’t like the tight clench of his buttocks, a subject on which New Mexico’s constabulary is apparently expert, and determined that it was because he had illegal drugs secreted therein. So they arrested him, and took him to Gila Regional Medical Center in neighboring Hidalgo County, where Mr. Eckert was forced to undergo two abdominal X-rays, two rectal probes, three enemas, and defecate thrice in front of medical staff and representatives of two law-enforcement agencies, before being sedated and subjected to a colonoscopy — all procedures performed against his will and without a valid warrant.

Alas, Mr. Eckert’s body proved to be a drug-free zone, and so, after twelve hours of detention, he was released. If you’re wondering where his lawyer was during all this, no attorney was present, as police had not charged Mr. Eckert with anything, so they’re apparently free to frolic and gambol up his rectum to their hearts’ content. Deming police chief Brandon Gigante says his officers did everything “by the book.” That’s the problem, in New Mexico and beyond: “the book.”

Now go read the whole thing...
Posted by Unknown at (permalink) 8:21 AM No comments:

Only 22% of uninsured Americans intend to buy insurance on the healthcare exchanges.  What a success!

ObamaCare is running out of bullets.  Megan McArdle on the dearth of rabbits left for Obama to pull out of his hat...

The ObamaCare dozen.  The debacle is starting to get Democrat incumbents worried about their re-electability.  Seriously worried.  Time to get out the popcorn!
Posted by Unknown at (permalink) 7:23 AM No comments:

Mystery symbols, demystified...  Some time ago, while reading a computer science paper, I ran into a mathematical symbol that was new to me: the vertical ellipsis (at right).  I had no idea what it meant, and it wasn't at all obvious from the context.  I eventually deduced that it was indicating an elision (some things left out), but that was only after much work and hair-pulling (and I don't have a lot of hair to pull!).  What was especially frustrating was trying to search for its meaning using Google.  Searching for the symbol itself got no results, and I didn't know what the symbol was called (“vertical ellipsis”, it's actual name, never occurred to me).

This morning I stumbled across a table of mathematical symbols on Wikipedia, which I've now bookmarked as a useful resource...
Posted by Unknown at (permalink) 7:17 AM No comments:

40 maps that explain the world...  Well, I think it would actually take a lot more than 40 maps to do that, but there's no doubt this is an interesting collection.  The one at right, for instance, shows where various legal systems are used around the world.  There were some big surprises on here for me, like Louisiana being different than the rest of the U.S. (should have suspected that one!), and Belize being different than the rest of Central America.  What I know about Belize would easily fit on a postage stamp, but it's surprising to me that it's different than the rest of Central America – but digging into its history just a bit, I see that it was once a British Colony (the only one in Central America), so its legal system is inherited from that.  Amazing what you can learn from a map!
Posted by Unknown at (permalink) 7:07 AM No comments: 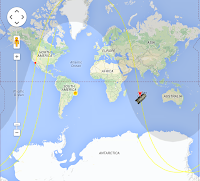 GOCE is falling!  GOCE is falling!  The GOCE satellite is an ESA project, a low earth orbit satellite that has run out of fuel.  It's orbit was (intentionally) so low that it encountered drag from the Earth's upper atmosphere, so running out of fuel means that it will inevitably be dragged out of orbit.  These things can't be predicted precisely (the drag profile and upper-atmosphere dynamics are just too complex), but the expectations are that it will fall sometime this weekend.  It's in a polar orbit, which means that it could come down nearly anywhere on the planet.  GOCE is big enough that some pieces of it should make it all the way to the Earth's surface (most of it will burn up in the atmosphere).

N2YO has a nifty real-time tracker.  As I write this, GOCE is 108 miles high, and will pass almost directly over my head in about an hour (screenshot at right; the little red dot is where I live)...
Posted by Unknown at (permalink) 6:52 AM No comments:

Great newspaper corrections...  The traditional newspaper correction notice is (or at least, used to be) something of an art form – for some reason, most especially in the British press.  The Listener, out of New Zealand, has collected some of the best.  Here's one example, from the London Sun:


In an article on Saturday headlined ‘Flying saucers over British Scientology HQ’, we stated ‘two flat silver discs’ were seen ‘above the Church of Scientology HQ’. Following a letter from lawyers for the Church, we apologise to any alien lifeforms for linking them to Scientologists.

Hah!
Posted by Unknown at (permalink) 6:39 AM No comments:

Geek: Say what?  This headline caught my eye:

Now geeks of a certain age (those old enough to have used a computer in 1979 or 1980) will certainly recall the Commodore PET.  It's a 6502-based all-in-one computer.  The model 4032 (pictured) tempted me back then, as it was relatively inexpensive, decently constructed, and had a lot of software available.  But the business I had back then was more or less locked into the Z-80 processor and CP/M “operating system”, so I never did take the plunge.

Back when the PET was made, there was no such thing as the Internet, web sites, TCP/IP (at least, not outside of ARPA), or even networks.  So how on earth could there be a web server on a PET?

It turns out there is still a very active PET community, though these days it's more like a group of antique tinkerers.  But to my surprise, there are still companies (tiny ones, I suspect) making new hardware for PETs – such as this internet modem.  That's a bit like retrofitting a J-5 rocket engine onto a horse-drawn carriage – I'm sure the processor running that modem is many thousands of times more powerful than the PET's puny little 6502.  The modem is running all the networking, including the protocol stack all the way up to HTTP.  That means the Basic code to implement the “web server” is pretty simple: