I don't really like Krispy Kreme donuts, but ... I think I'd still be unhappy, and I'd immediately suspect Michelle Obama...  Via my lovely bride: 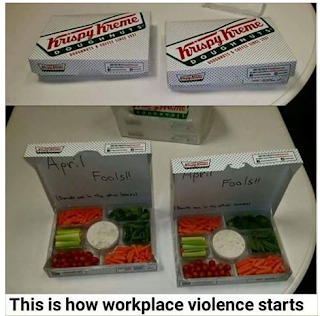 Posted by Unknown at (permalink) 11:58 AM No comments:

Morning in Paradise...  Yesterday was Debbie's 12 week followup visit with her knee doctor.  He pronounced her fit for full weight bearing, as she can tolerate it, and told her to get on with the physical therapy to build up her muscles again.  He also gave her a referral for more physical therapy, to help with her lower back pain.  She's going to be working out a lot!  Debbie also had her second hydro-therapy session yesterday, and that went very well indeed.  So yesterday afternoon, by way of celebrating, we headed for Salt Lake City for an early dinner at The Red Iguana.

After our last experience with an excellent “special”, the first thing we looked at was the specials (which are different every day).  There were three, and they all sounded great!  Debbie picked the baby back pork ribs, which she pronounced delicious (in between yummy noises).  I had a chile relleno special, with a roast poblano pepper in a light egg batter (no grease in sight!), stuffed with a spiced (but not spicy hot) mixture of ground beef, corn, pine nuts, and raisins.  That was, hands down, the best chile relleno I have ever had - brains fall out on the table good.  We topped it off with flan, excellent as always.

Then Debbie had the brilliant idea of trying the State Liquor Store in Salt Lake City, thinking that it might have more selection.  There was a beer she wanted to get (Epic Brewing Intermountain Wheat), and I was looking for a decent cognac.  A quick Google Maps query showed us that the State Liquor Store was less than a mile away, on the same road as Red Iguana – perfect!  We tootled on down there, and discovered that it was four or five times the size of the Logan liquor store, and had all the things we wanted (and more).  So we headed home with very happy bellies, and loaded down with a fine selection of hootch.  Yay!

This morning I took our usual walk with Miki and Race.  It was a particularly beautiful morning: blue, blue sky with just a few puffy clouds, temperature 64°, humidity 35%, dew on the ground, all the dust tamped down by a light rain last night.  It's hard to beat this for walking!  We took a loop route, and just as we started back we were joined by two very happy, crazy-friendly Springer Spaniels.  They stayed with us all the way home.  One of them had a tag with a partially readable phone number, so I locked them in the back yard and tried to contact the owner.  As I was doing that, Debbie called up to tell me that the dogs had escaped the back yard, and were tearing off for parts distant.  Oh, well.  So much for the idea of helping them get back home.  We're hoping they're smart enough not to get hit by a car.

Now we're off to do some grocery shopping... 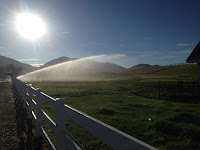 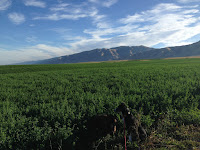 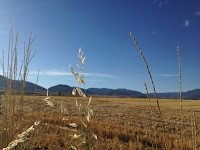 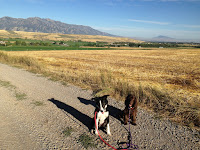 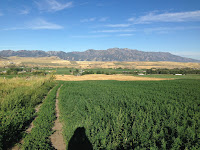 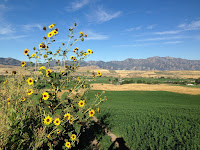 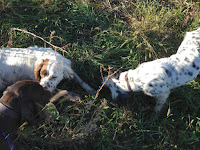 Posted by Unknown at (permalink) 9:28 AM No comments: