It's another below-freezing day... 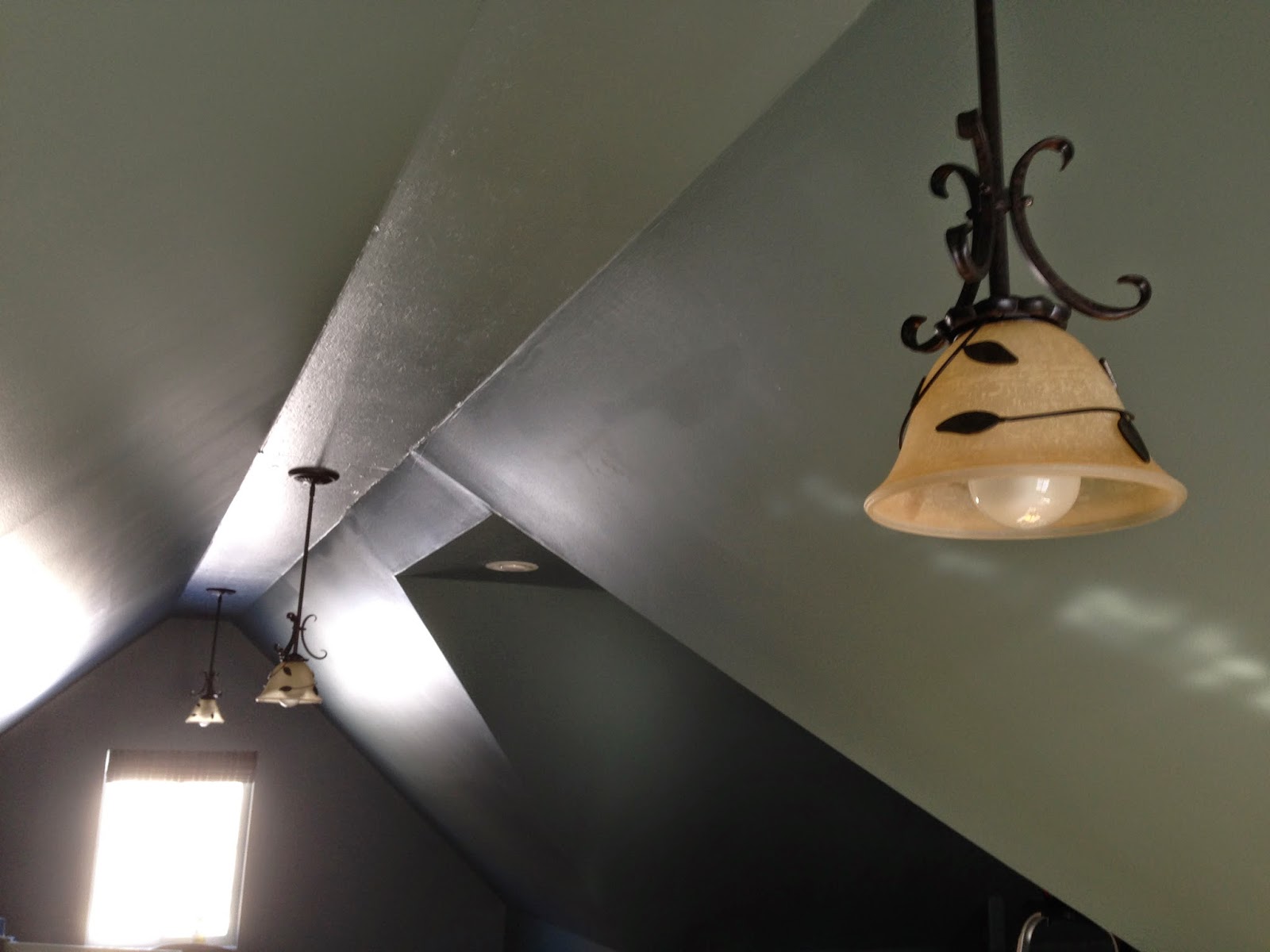 It's another below-freezing day...  So I installed some more replacement lamps today.  These three are in our “TV room” on the second floor.  The wide angle lens on the iPhone makes it look like two of the lamps are a couple miles down the road, but in reality the furthest one is about 20' away :)

When we bought the house, there was a very fancy, modern-looking Italian light that stretched all the way across this long ceiling.  It had five low-voltage lamps, each just 20 watts, strung out along a pair of tightly stretched cable that looked like stainless steel.  The whole affair looked like something that might be on the Starship Enterprise, but it put out a paltry amount of light in five beams, as if someone had hung five flashlights from the ceiling.  The new lights have 100 watt (equivalent) LED bulbs in them, very nicely lighting up this entire area.  They look much more like our style, too.

I'm beginning to expect now that each project I begin will run into problems.  This one sure did.  The first lamp I put up, I ran into a junction box with metric screws (4mm, 0.7 pitch).  I didn't even know there was such a thing.  And where did the builder find one around here?  It's as if I opened my front door and spotted a kangaroo!  The second lamp's junction box had totally stripped threads – the lamp I removed had been glued to it.  I ran up to the Ridley's in Hyrum and got a new box.  Sheesh.  The third lamp's junction box was very badly miswired: the hot and cold wires were crossed, and the safety ground wasn't connected.

I wonder what I'll find on my next project!
Posted by Unknown at (permalink) 12:33 PM No comments: 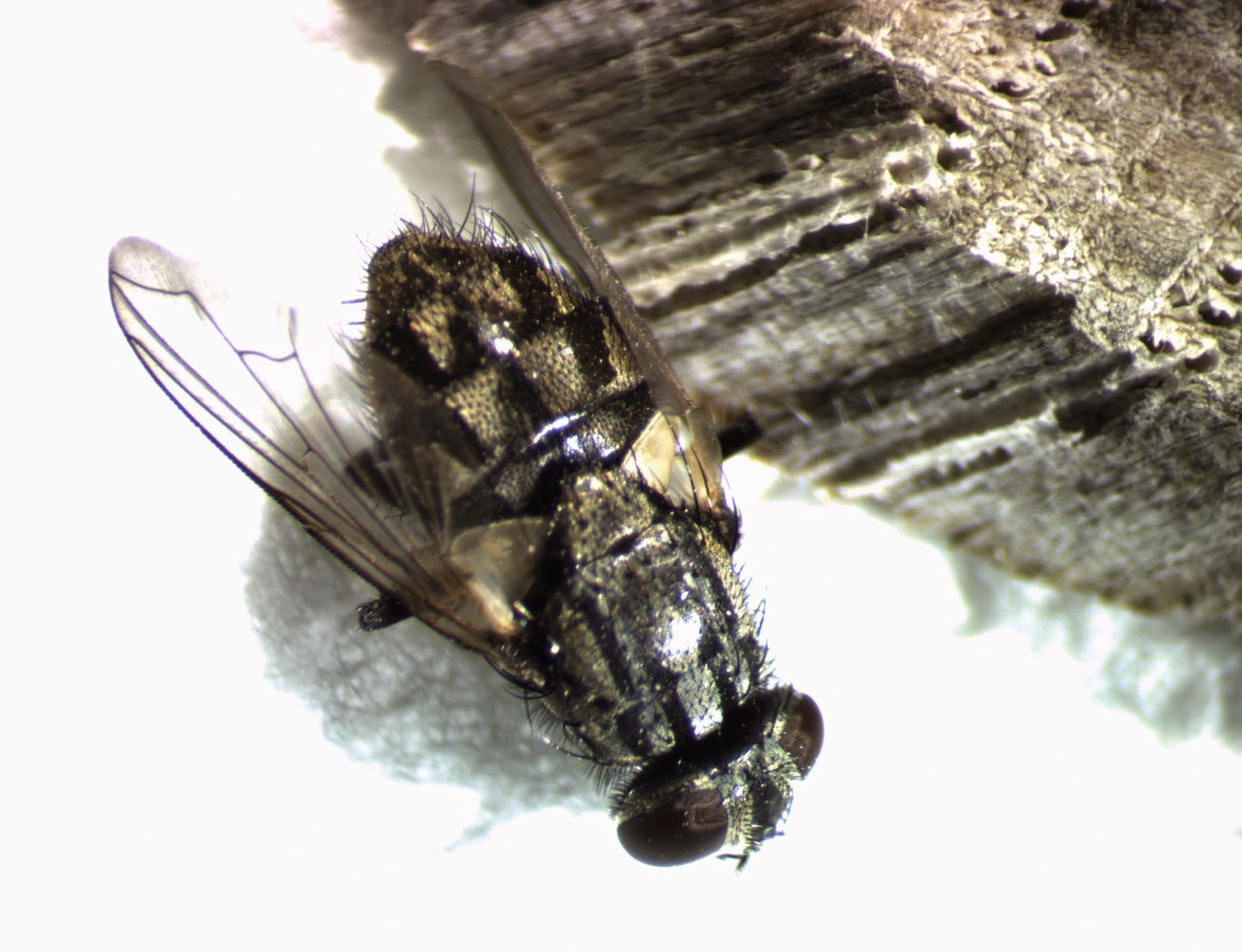 Fly...  This one died of natural causes, so far as I can tell.  I found it on a window sill.  The piece of wood holding it upright is a chip of oak flooring.  Taken at 25x magnification.  Flies sure are a lot hairier than I'd imagined!
Posted by Unknown at (permalink) 9:32 AM No comments:

“They didn’t understand how men could not see these problems, but it’s because so many of us are being so goddamn quiet.”

“They didn’t understand how men could not see these problems, but it’s because so many of us are being so goddamn quiet.”  What's it like to be a woman in the tech industry?  Are there few women in tech because the experience is so bad?

I don't know Randi Harper; to the best of my knowledge I've never met her or talked to her.  Reading her description of her current job makes me hope I have the chance someday:


Cat herder, spine of steel, puzzle master, obfuscated code whisperer. I complain a lot about things that go bump in the night. Then I track down the monsters and kick them in the junk. I could solve world hunger with a 200 line perl script.

That's a geek with a sense of humor :)  And about as DevOpsy as you can get...

The quote at the beginning of this post is Randi's, from a two-part piece she's written that's guaranteed to have provoke a strong reaction:

I spent 34 years in the tech industry, from 1979 through 2013 (I'm not counting my 6 years in the Navy).  I did a lot of different things, including starting my own businesses, working as an engineer, running datacenter IT, and executive management.  Over those years, I worked with a number of women: peers, superiors, and subordinates.  There were far fewer of them than there were men, to my disappointment (because I like working with women).  Just like the men I worked with, some of the women were good at their jobs, some not so good.  No woman I've ever worked with has told me that she had experienced anything like what Randi describes in Part 1 – but that obviously doesn't mean it didn't happen.  I have had the unhappy experience of investigating accusations of sexual harassment leveled by a subordinate.  Most of these were real, but (so far as I'm aware) isolated instances not part of a pattern the women involved were experiencing.  Certainly none of the women I interviewed ever asserted anything otherwise.

If Randi's experience is actually widespread amongst women in tech, I am appalled – on multiple levels, but in particular because it must mean that some women I worked with were subjected to it.  I wonder what I could have done differently that would have encouraged these women to simply talk with me about it?

Randi's onto something here, I think.  I'm uncomfortable with the inevitable inference that this is somehow the victim's fault, but ... speaking as a former manager, I can guarantee that if a manager doesn't even know about something, they for damned sure can't do anything about it.  Any halfway decent human being (and yes, I'm including managers in that group), if presented with this sort of abuse, would want to do something about it.

I'm no longer in a position (because I'm retired) to help anyone directly.  But I'm hoping that Randi's call to arms will help motivate others to speak up if they're being subjected to the sorts of horrible behavior Randi experienced...
Posted by Unknown at (permalink) 9:04 AM No comments:

Environmental problems you don't hear about...

Environmental problems you don't hear about...  One of these I discovered years ago, in reading a book about why cities are so dirty.  Once people stopped low temperature combustion (like wood fires, or coal fires) that made carbon soot in staggering quantities, why do cities still get dirty so quickly?  Especially noticeable is the black crud that accumulates on building walls.  What is that?  As you might guess, it's a complicated mess of stuff, but it's dominated by rubber dust – the tiny particles of rubber that wear off tires.  It turns out that is really nasty stuff, and it's been implicated in quite a few health issues that city dwellers suffer much more than rural folks.  There's a much higher concentration of rubber dust in cities.

This morning I read about another pollutant that in many ways reminds me of this: microscopic fibers shed by garments made with synthetic (plastic) fibers.  These are far larger fragments than rubber dust particles, but still small enough in many cases to affect individual cells.  It sounds like something we really should understand better than we currently do...
Posted by Unknown at (permalink) 8:19 AM No comments:

“Because we’re primates with vested interests in tracking social hierarchies and patterns of social affiliation.”

“Because we’re primates with vested interests in tracking social hierarchies and patterns of social affiliation.”  I read this article – On the Origin of Celebrity – hoping that it would help me understand the phenomenon of celebrity, which has long been a complete mystery to me.  The article raised far more questions for me than it answered.  The basic thesis it puts forth is that celebrity obsession is an innate, genetically transmitted, characteristic of primates.  One paragraph's lead is “So with think a lot about status relations...”, which lost me completely.  I spend exactly zero time thinking about status relations, and I didn't realize that other people do.

Does that mean I'm not a primate?  Not human?

I have a suspicion that this is closely related to introversion (and I'm a fairly extreme introvert, self-trained in the art of getting along with extroverts).  I did a quick search to see if this correlation has been noted before, and found a few anecdotal mentions, but nothing more.  If I'm right, the inverse would be true: extroverts would be more likely to think about status relations, and therefore more likely to be obsessed with celebrities.

One experience I've had many times is to be in a room full of people (usually a business meeting of some kind) wherein someone will say something that everyone finds funny – everyone except me, as I didn't understand it.  Sometimes its a reference to sports (which I pay no attention to), but more often its a reference to some celebrity.  I've always chalked up the celebrity “misses” to my lack of interest, and have long been puzzled why all the other people did have enough interest to have absorbed these things.  Now I'm wondering if all or part of this was yet another difference between extroverts (who dominate in the management world that I was long part of) and introverts...
Posted by Unknown at (permalink) 8:09 AM No comments:

One of my neighbors has a ewe, and she's baaaing like crazy.  That's about what I felt like doing when I walked outside this morning...

I left the house at about 6 am, headed for Angie's for breakfast.  This is turning into a regular thing for me, having a Sunday breakfast of chicken-fried steak and eggs with a scone at Angie's.  Yum!  This morning when I walked out the front door, my boots crunched loudly on the snow.  My windshield was clear, so I didn't have to scrape it.  When I tried to start the truck, the engine didn't catch at first.  That never happens on my Toyota Tundra – the engine always starts up within a fraction of a second of my turning the key.  This morning it took 10 seconds or so of cranking before it started, and then it ran ragged for 30 seconds or so.  Maybe my oil froze :)  It was fine after that, thankfully.  I had the heater up full blast for the entire 20 minute drive, and the interior of the truck never got above 20°F.

It's going to take us a while to get used to these low temperatures...
Posted by Unknown at (permalink) 7:37 AM No comments: