There's some practical wisdom in these (from reader Jim M.):

Keep skunks and bankers at a distance.

Life is simpler when you plow around the stump.

A bumble bee is considerably faster than a John Deere tractor.

Words that soak into your ears are whispered....not yelled.

Forgive your enemies; it messes up their heads.

Do not corner something that you know is meaner than you.

It don't take a very big person to carry a grudge.

You cannot unsay a cruel word.

Every path has a few puddles.

When you wallow with pigs, expect to get dirty and look like an idiot.

The best sermons are lived, not preached.

Most of the stuff people worry about, ain't never gonna happen anyway.

Don't judge folks by their relatives.

Remember that silence is sometimes the best answer.

Live a good and honorable life, then when you get older and think back, you'll enjoy it a second time.

Don't interfere with somethin' that ain't bothering you none.

Timin' has a lot to do with the outcome of a rain dance.

If you find yourself in a hole, the first thing to do is stop diggin'.

The biggest troublemaker you'll probably ever have to deal with, watches you from the mirror every mornin'.

Always drink upstream from the herd.

Lettin' the cat outta the bag is a whole lot easier than puttin' it back in.

If you get to thinkin' you're a person of some influence, try orderin' somebody else's dog around.

Speak kindly, and leave the rest to God.

Don't pick a fight with an old man. If he is too old to fight, he'll just kill you.

Seven classic Feynman lectures, online...
Posted by Unknown at (permalink) 6:20 AM No comments: 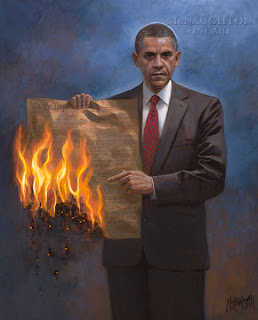 Artist Jon McNaughton has been in the news a several times over the past few years for his controversial political paintings.  The one at right, showing President Obama holding a burning U.S. Constitution, is his latest.  On his web site, the following text appears below the painting:


One Nation Under Socialism

“I pledge allegiance to the United States of America,
And not to an ideology, which can never stand,
One nation under socialism, divisive,
With no liberty or justice for anyone.”

This November, you will make a choice. Will you choose One Nation Under Socialism?

McNaughton’s Answers to Questions Regarding This Painting:

Why the title “One Nation Under Socialism?”
Our federal government has been moving in the direction of socialism for over one hundred years. Many presidents and politicians have compromised the Constitution as we have given away our freedoms under the guise of entitlements and government intervention. When the people are willing to sacrifice the next generation for their current lifestyles and allow the federal government to have all the power for an illusory mess of pottage—you have chosen One Nation Under Socialism.

What do you mean by an ideology, which can never stand?
I will not support an ideology, which will lead to the destruction of America. In the history of the world, never has there been a recorded example where Socialism has led to the betterment of the human condition or improved the liberty of the people. I know there are varying degrees and definitions of “socialism.” Even the European model of Democratic Socialism has proven to be a dismal failure. Do you want to see our country become like Greece, Italy, Portugal, or even Great Britain?

What do you mean by “divisive, with no liberty or justice for anyone?” Socialism uses the illusion of offering fairness and justice for everyone by redistributing the wealth of the nation; picking and choosing winners and losers. This administration has taken over our health care system, given bailouts to the automotive industry, banking industry and energy industry. They support the “Occupy Wall Street” movement of increased taxing of the rich to pay for the welfare of the “less rich.” The Constitution never guaranteed equal things—only equal rights and justice. In America we should be FREE TO SUCCEED and FREE TO FAIL!

At this very moment our Constitution is literally going up in flames. What will you do to preserve the Constitution and save America?

Interesting character. I don't know anything else about him, so I don't know whether he's expressing his genuine beliefs or just exploiting a market opportunity. After reading his web site, though, I'm inclined to the former...
Posted by Unknown at (permalink) 5:42 AM 1 comment: