My current effort on fixing up the FJ Cruiser is focused on building a platform where the back seats used to be.  This platform will serve two purposes.  First, it provides a level, flat, and elevated place for the dogs to sit behind us at the right height for them to see around.  Second, under the platform is a handy-dandy storage space for tools, winch supplies, etc.

The platform needs to be sturdy and rigid, and strong enough to handle any kind of stress we might put on it while offroading.  I came up with a design that relies on 1/2" thick marine-grade plywood (this means it has no voids on the internal plies) and 1" angle iron to join the pieces.  So far I've fabricated the fore and aft bulkheads, and a port and starboard rib – the basic strength components of the design.  All four of these pieces are bolted directly to factory threaded holes, the same places that the back seats and seat belts were attached.  The pictures below, with their captions, tell the story of what I've done so far (there's much more to go!)...


Posted by Unknown at (permalink) 6:15 PM No comments:

Debbie and I went to lunch yesterday with a friend and former colleague, Aleck L. – at Sushi Ota in Pacific Beach.  It was make-your-brains-fall-out good, and it was even better to spend some time with Aleck.  This was my lunch, a daily special: 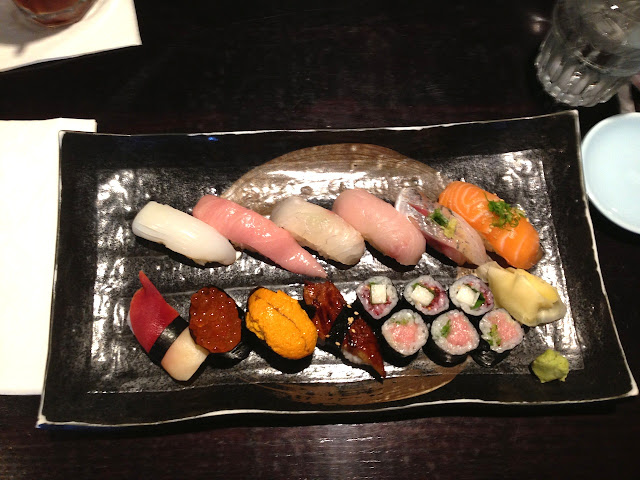 Debbie ordered several rolls and gobbled them down like Mo'i attacks dog food.  Then we had dessert – green tea creme brulee, also delicious.  After we ate, we sat and had a delightful conversation in which three hours went by without our noticing...
Posted by Unknown at (permalink) 5:11 PM 1 comment:

Dave Carter, over at Ricochet, waxes poetic about his personal encounter with Murphy's Law the other day.  Here's one paragraph to whet your appetite:


As it turned out, the remainder of THAT day was filled with one human abnormality after another.  It began to wear on me, so that by the end of the day, I sought out a booth in the corner of the restaurant, as far away from everyone as possible.  That was when, predictably, a very large fellow and his wife arrived at the booth directly behind me.  When the big fellow -- we'll call him Jabba the Customer -- plopped down in the seat directly behind me, it had a seesaw effect that nearly launched me across the room.  I tried to make the best of it though, honestly I did.  When he decided to blow his nose loud and long in the restaurant, it sounded like the contents of his head were being spackled into his hanky.  I didn't say word, though my appetite was waning.  But when he followed up that little display of grace with a chunky, wide open-mouthed belch, I quite reflexively turned around and asked, "Would you like me to get a waitress to clean that up or do you want to barf first?"  His wife sat there wide-eyed and speechless, and Jabba the Customer didn't even acknowledge that I had said anything.  A few minutes later, they left.

Key Management Is the Problem...

In any system for transmitting messages using encryption, the security of the system boils down to the security of the encryption key.  This key security often isn't electronic at all – you need a secure way to distribute keys to authorized message senders and receivers.  If that key is stolen or misplaced, your key distribution process and ensure that no real messages are sent with that key – as the bad guys might have it.  This process is called “key management”, and it's hard.  Almost always there's a flaw in key management – anything from a minor and unlikely vulnerability to a gaping security hole you could drive an aircraft carrier through.  All of this is well understood by anyone designing a security messaging system.

So...how do you make a secure key management system?

Well, Roarke Horstmeyer at the California Institute of Technology and some others think they have an answer.  For their “key” they use a slab of special glass whose microscopic structure is random, unpredictable, and readable.  To set up a secure system, they make two slabs of glass – one for each side of the messaging system.  They then read the random data in each key and combine them to make a public key.  This public key can be safely published to the world, as it's contents can't be used for anything by itself – you have to possess one of the two glass slabs to make it useful.

Let's say we have two parties: the traditional Alice and Bob, each of whom have one of these special glass slabs.  The combination has been published.  Now Alice wants to send Bob an encrypted message.  She figures out how long her message is (“n” bits) and then takes the next “n” bits of her key (read from her glass slab) and uses them to encrypt her message.  She sends the message to Bob.  Bob takes the next “n” bits of his key (read from his glass slab) and subtracts it from the published combined key, yielding Alice's key – which he then uses to decrypt her message.  Straightforward and as secure as a one-time pad.

Really the glass slabs are just a memory – a very reliable, physical and tangible memory that (today at least) could not easily be copied.  Even just reading it would take a considerable amount of time, which means that security protocols (processes) could detect the fact that someone was reading it.  There's nothing special about the glass per se; it's this combination of characteristics that make it attractive.  A thumb drive could store data for a key, and be used the same way as the glass – but copying the thumb drive takes only a few seconds, and it's easy.  A thumb drive (or any other electronic store) would be vulnerable to any such attack.

The trouble with the glass, though, is that almost certainly there's a technical attack – some way that a bad guy could quickly read it.  Any conceivable storage mechanism for a key has this problem...
Posted by Unknown at (permalink) 4:31 PM No comments:

What a Great Idea!

Posted by Unknown at (permalink) 2:03 PM No comments:

When you distrust your government, you start looking at things in a different light.

Consider this: on March 31st, 2010, Colleen Kelly visited with President Obama.  Kelly was the president of the National Treasury Employees Union – a virulently anti-Tea Party group that happens to represent most IRS employees.  Nothing suspicious about this visit; that's exactly the kind of friendly visitor you'd expect Obama to have.  But...the very next day IRS workers started targeting conservative and Tea Party groups.

Coincidence?  Hmmm...
Posted by Unknown at (permalink) 8:38 AM No comments: