How Obamacare Will Screw You...

Labels: Cartoon of the Day, Obamacare

Our Secretary of State visited Egypt this weekend, where she was greeted by crowds chanting “Monica, Monica”, and tossing rotten tomatoes.  The so-called Arab Spring has resulted in a freely-elected Islamist government, unresolved tension between the elected government and the corruptocratic military government, and now ... open mocking of our official government representatives.  I'm not arguing that the mocking isn't richly deserved, mind you.  Just noting that the government of hope and change has indeed brought us change – though not of a particularly hopeful looking variety...
Posted by Unknown at (permalink) 4:43 AM No comments:

Spotted in a news report:


Meanwhile, the Postal Service is on pace to lose billions of dollars this fiscal year, and owes $11 billion, in two separate installments, over the next two and a half months in prepayments for retiree health care.

Subsidizing the U.S. Post Office at levels like this is sort of like passing a gigantic bill that would put 200,000 people back to work making horse-driving buggies.

The news report is all about the Post Office “rescue bill”, and the discussion is laced with the assumption that rescuing the Post Office is a good idea.  I don't know what the hell those politicians are thinking!  Could it be that they're so attached to their “franking” privilege (basically, free stamps) that they're willing to stick it to the rest of us to the tune of tens of billions of dollars per year?  I'll bet none of them have tried to get service at a post office any time recently.

It's high time (and has been for decades now) to privatize the Post Office and let the marketplace sort this mess out...
Posted by Unknown at (permalink) 4:37 AM No comments:

As seen by the Hubble telescope: 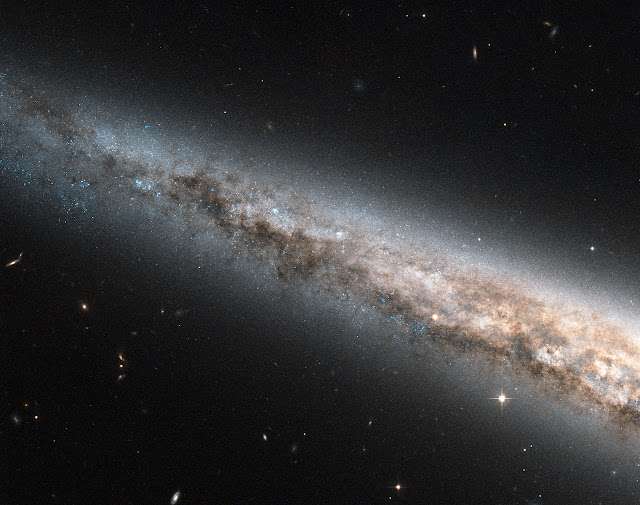 Just in case it's not obvious: this is a spiral galaxy seen edge-on...
Posted by Unknown at (permalink) 4:29 AM No comments: