Paradise ponders: rodeo and project progress edition...  Debbie and I are headed down to Ogden this evening, to go to the rodeo that's part of Ogden's Pioneer Day celebration.  If you're unfamiliar with Pioneer Day, it's an annual celebration of July 24, 1847 when Brigham Young and the first group of his Mormon followers finally made it to the Great Salt Lake Valley.  It's a state holiday in Utah, and is also celebrated in several surrounding states, mainly in predominantly Mormon communities.  This particular rodeo is part of the professional rodeo circuit, so some of the best rodeo competitors in the world will be there.

Randy B., his partner Jeffrey, and two of Randy's grandsons showed up bright and early this morning, as promised.  Some photos of their progress are below.  The first order of business was to mount our shiny red door, which they did with a level of competence far in excess of anything I could have mustered on my own.  It is a great pleasure for me simply to watch them work – Randy and Jeffrey have worked together for a good number of years, and they complement each other very well.  Jeffrey is the guy on the left in the first photo; Randy is in the dark blue T-shirt in the second.  In the third photo you can see the door shortly after they had it installed.  The last photo shows Carl (Randy's border collie) and the first foot or so of rock veneer installed.  It's going to be beautiful when they're finished! 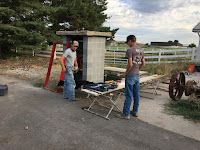 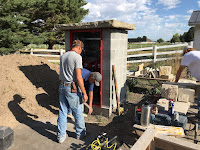 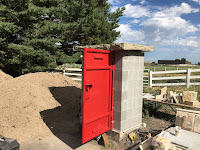 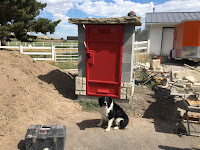 Mark T. and the sprinkler guys also made great progress today.  They're still working as I write this, and will be for another 6 hours or so.  By the time they leave tonight, I'm expecting that they'll have all the valve wires plus the 110 VAC for my flagpole lights all run under our bridge.  That means tomorrow we should have the 13 zones on the south wired up to the sprinkler controller and we can start watering everything south of our driveway.  Woo hoo!
Posted by Unknown at (permalink) 1:51 PM No comments:

Paradise ponders: rock, ignorant Americans, leaky tires, and plumbing errors edition...  Yesterday evening I got a call from Randy B., the mason who built our fireplace two years ago.  He's got a couple of days available, starting tomorrow, and he wants to get our filling station done.  Yay!  He should be here this morning at 7 am, so he and his helper can work in the (relatively) cool morning air...

The great sprinkler project continues apace.  There are now 13 complete zones covering the entire area south of our paved driveway.  Complete, that is, except for the wires leading to the control valves for those 13 zones.  We're running those wires through a conduit installed under the bridge over the irrigation canal running down the eastern edge of our property.  That sounds easy, but it's not – the conduit has to traverse, underground, about 15 feet of abutment on both sides of the bridge.  The trench for that conduit has to be dug amidst a wild rose thicket.  The sprinkler guys lopped off all the rose canes above the chosen path – but the rose roots are incredibly thick in there.  Digging that will be a major challenge.  I'm glad I don't have to do it!  Once the conduit is in place, I'll be helping the sprinkler guys pulling the wires through it.  That's something they're not very familiar with, nor do they have the right tools...

My friend (and former colleague) Simon M. passed along this article, I'm sure just to tweak me.  :)  Among other things, it discloses that 1 in 4 Americans surveyed believe the sun revolves around the Earth, not the other way around.  I'm actually a little surprised at this – I'd have expected that to be more like 1 in 3.  It reminds me, though, of an article I read a few months ago on a tangentially related topic: technological ignorance.  The focus of this article was a single survey question made at widely separated points in time.  The first survey was in 1940, and it asked men (no women) in their 20s how many actually did a set of routine maintenance on their cars, and how many could do them if they didn't have the money to pay someone.  The answers were 81% and 96%, respectively.  The same survey, of (again) only young men, taken in early 2017 gave much different answers: 7% and 14%.  The 2017 survey also asked men who answered “no” to briefly describe why they couldn't do the routine maintenance – and the dominant answer was some variant of “Because I have no idea how cars work.”   I haven't seen any similar survey for computers, but it's trivial to observe that the vast majority of computer users have utterly no idea how their computer actually works.  My dad remarked in several of our conversations that he and my grandfather (his father) knew how everything on the farm worked, and could maintain and repair it.  These days it's common for people to own things whose workings are completely mysterious.  In the space of one man's life we've gone from a norm of understanding one's belongings to not understanding them.  I wonder how far that trend can go? 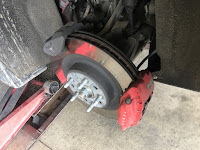 Yesterday I took my Model X in to the good folks at Hyrum Tire to get a slow leak in my left rear tire fixed.  I'd made an appointment so I could wait while they fixed it.  However, when they actually saw my car, they realized they had a problem: their tools only work with rims up to 21" in diameter, and I've got 22" rims on the Model X.  Dang!  So they sent me up to Logan, to the Les Schwab location there.  I drove in, walked up to the counter, and in under two minutes one of their people went to work on my car.  They had me drive into one of their service bays, and in short order they had the wheel off the car.  That left the axle and disc brake visible, and several people there noticed something odd about the disc brake: there are two calipers on it!  The red one is the main brake; the gray one is only for the parking brake.  Ezra, the tech helping me, found my tire's problem in seconds: a 2" deck screw right through the exact center of the tread – the easiest possible repair.  When he got the tire off the rim, he discovered something he'd only seen once before: a foam ring around the inside of the tire, opposite the tread.  That foam is there to reduce the tire noise; he's seen it only in a relatively quiet car (a high-end Mercedes) where the tire noise becomes dominant.  In about ten minutes the repair was all done, and the wheel mounted back on the car.  We had to look up the wheel nut torque (129 ft/lbs) on the web, as his chart didn't have Tesla on it.  I went to pay up when he was finished, only to be told that the repair was free.  All they asked was that when it was time to buy tires, I'd give them a chance for my business.  Nice!

Yesterday morning I discovered that I'd made an error in my plumbing work for the irrigation pump.  Fixing it correctly requires some new parts – including two that aren't available locally.  I put both on order, but they won't get here for a week or so.  Dang it!
Posted by Unknown at (permalink) 5:31 AM No comments: