These days, we take it pretty much for granted that photographs (and even videos) can be electronically transmitted around the world, nearly instantly.  But not so long ago, this was a bleeding edge technology: 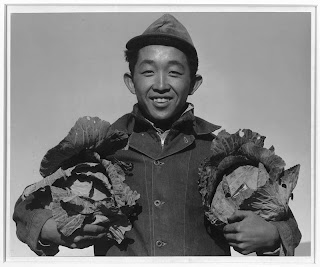 Manzanar was one of the notorious internment camps where over 100,000 Japanese-Americans were imprisoned in WWII.  Ansel Adams was already a famous photographer at the time.  I just ran across a fact previously unknown to me: that Adams was unhappy about the internment, and asked permission to photograph the Manzanar camp.  You can see a collection of these photographs (one of which is at right) on this site.

Looking at these photos, I don't get the sense that Adams was appalled by what he found.  In fact, I'd say the collection overall conveys quite a positive, hopeful sense of people making the best of a bad situation.  I've not been able to find anything in writing from Adams, describing how he felt about what he observed at Manzanar.  If you know of any such writing, please let me know...
Posted by Unknown at (permalink) 4:29 AM No comments:

This is fascinating stuff that I've been following for a few weeks now, as the news dribbles out.  It's beginning to look like archaeologists have a solid case for Europeans having been the first to colonize North America:


New archaeological evidence suggests that America was first discovered by Stone Age people from Europe – 10,000 years before the Siberian-originating ancestors of the American Indians set foot in the New World.

A remarkable series of several dozen European-style stone tools, dating back between 19,000 and 26,000 years, have been discovered at six locations along the US east coast. Three of the sites are on the Delmarva Peninsular in Maryland, discovered by archaeologist Dr Darrin Lowery of the University of Delaware. One is in Pennsylvania and another in Virginia. A sixth was discovered by scallop-dredging fishermen on the seabed 60 miles from the Virginian coast on what, in prehistoric times, would have been dry land.

The new discoveries are among the most important archaeological breakthroughs for several decades - and are set to add substantially to our understanding of humanity's spread around the globe.

The general question of when did humans first make it to the Americas, and which humans were they, has had about 10 different “consensus” answers just in my lifetime.  It's clearly far from a settled question even now. Various series theories put forth include several variations of migration across the Bering Straights, landings by Polynesian explorers, Egyptians, Africans, the Vikings, and (now) even earlier Europeans.

One of these fine days, I wouldn't be a bit surprised to read that humans originated in the Americas!

Climatology could learn a thing or two from archaeology about how science is actually supposed to work...
Posted by Unknown at (permalink) 3:45 AM No comments:

By Gwynnie at Maggie's Farm:


The food stamp program, part of the Department of Agriculture, has announced that is pleased to be distributing the greatest amount of food stamps ever.

Meanwhile, the National Park Service, also part of the Department of Agriculture, asks us to "Please Do Not Feed the Animals" because the animals may grow dependent and not learn to take care of themselves.

If you're an aviation (or WWII history) buff, this is beautiful stuff:

Posted by Unknown at (permalink) 3:33 AM No comments: