Your Friday afternoon awesome...  Full-screen it and kick back...
Posted by Unknown at (permalink) 2:40 PM No comments:

Mankind's greatest achievement ... is capitalism.  I tweeted the chart at right yesterday.  Two readers emailed me and said (basically): “WTF does that chart show me?”  Here's why I found that chart tweet-worthy...

On the surface, that chart just shows the percentage of people living in “absolute poverty” over time (1820 to present).  That term (absolute poverty) was coined by the World Bank some time ago to represent those people whose income is so low that they do not have access to survival necessities: food, water, and shelter.  We're not talking about medical care, SUVs, or smart phones here – we're talking about staying alive.  Currently the World Bank pegs that at 1.25 “International Dollars” per day.  Those International Dollars are not at all the same as U.S. dollars; they're an imaginary currency and are adjusted for the buying power in each country, so this measure takes into account the different costs of food, shelter, and water in, say, the U.S. vs. Somalia.  Obviously poverty is a challenging thing to measure, and is to some degree subjective (I'm sure the Clintons think they're poor).  But it's a measure that at least attempts objectivity, and is better than anything else I'm aware of.

The red area on that chart shows what percentage of the world population lived in absolute poverty in any given year.  In 1820, nearly 95% of the world lived in absolute poverty.  In 1950, shortly before I was born, that was down to 72%.  It was over 50% when I was in high school, and I still vividly remember the news stories about people starving to death – especially in south Asia, Africa, and China.  Today the absolute poverty rate is down to 14% (and still falling).  The decline of the absolutely poor is a remarkable thing all by itself.

Even more remarkable: why the rate of absolute poverty has declined.

Several economists have run similar analyses, and gotten the same results: the percentage of people not living in absolute poverty is almost identical (over time) to the percentage of people living in capitalist societies.  You need to think about that to absorb its full meaning, but it boils down to this: capitalism creates wealth, and any other form of societal organization ever tried does not.  It really is that simple.

Progressives, socialists, and (U.S. style) liberals are in denial about this.  They don't want it to be true.  They would hate it if it were true, so they must deny it.  But it is an easy-to-observe fact that no socialist, fascist, monarchy, or dictatorship ever, in the entire history of the world, raised the average standard of living for its citizens (discounting the short-lived effects of borrowing or selling assets, seen most recently in Venezuela and Greece).  Only in capitalist societies do we see a consistent track record of poverty being reduced and citizen standard of living increasing.

I've never yet had a progressive (much less a socialist or communist) admit that fact to me, despite the absolutely ludicrous amount of historical confirmation.  To do so would require admitting that those nasty, conniving, scheming capitalists might not be evil people after all.

And that would never do, obviously...
Posted by Unknown at (permalink) 1:28 PM No comments: 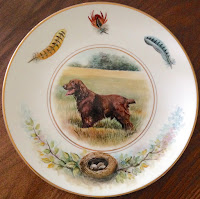 Field Spaniel Plate...  The auction we won a few weeks ago was shipped by Royal Mail on August 5th.  The plate arrived in Los Angeles two days later, on the 7th.  Our U.S. Post Office then took a week to get to Paradise (I'm guessing by donkey).

When I picked up the box from the Post Office, I was surprised how big it was.  We opened it and found a layer of shredded newspaper – great crushable shock absorbing material.  Inside that was a second box.  Opening that, we discovered a layer of bubble wrap.  Actually, it was six layers of bubble wrap, each one meticulously taped up.  Inside all that bubble wrap was a cradle of Styrofoam, also carefully taped up.  Inside that was another layer of bubble wrap, a layer of Saran wrap, a layer of tissue paper, and – finally! – the plate itself.  Naturally, after all that packaging it was in perfect condition.  I'm pretty sure you could have driven an M1A1 tank over the original box without damaging the plate!  I sent a note to the seller to tell them just how impressed we were with the packaging.  Oh, and the plate, too :)

Debbie is now on a quest to find a nice stand for it, so we can put it in our hutch full of field spaniel-related art.

The artist is James Skerrett.  He's a couple years younger than I am, and has specialized in ceramic art (especially dogs) for most of his career.  The plate isn't particularly valuable, but it fits very nicely indeed into our collection, and the proceeds went to benefit the breed's health (through the Field Spaniel Health charity in England).  Double win!
Posted by Unknown at (permalink) 10:39 AM No comments:

Hey!  That's my watering system!  I must be a plugger...
Posted by Unknown at (permalink) 9:29 AM No comments:

Really simple explanation of the world economy ... using cows.  Hilarious!
Posted by Unknown at (permalink) 8:38 AM No comments: 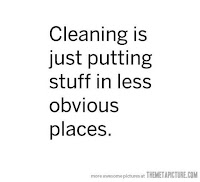 Morning in Paradise...  Debbie and I slept in this morning; we didn't get out of bed until after 5 am (that really is late for us!).  I let Mo'i out into the back yard at about 6 am, and just after that it started to rain.  No rain was in the forecast, so we were surprised by this.  As we were drinking our tea and coffee, there was a tremendous lightning strike a half mile or so northeast of us, followed by a house-shaking thunderclap with no reverberations.  The dogs were suddenly very still and quiet.  I think they're quite impressed by the thunder gods here :)

Around 7:15 it looked like the rain was over (the radar showed nothing), so Miki, Race, and I took off for our morning walk.  The sun was up through a notch in the Wasatch Mountains, and the sky was full of clouds.  This made for some beautiful lighting effects, which show up in some of the photos below.

The last photo shows the end of one pipe out of a wheelie line system.  I hadn't seen this before.  What I found interesting there was the “gear” that engages with the pipe connected to it to provide the means to transmit the considerable torque required to move the pipes.  The movement uphill, especially when the pipes are full of water, might require several hundred foot/pounds of torque.  I'd been wondering what kind of a joint could do that; this one will do it quite nicely.  The pipes themselves are a bit thicker than the pipes used on hand lines, presumably for the same reason (torque transmission)... 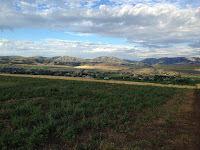 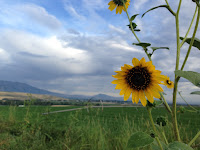 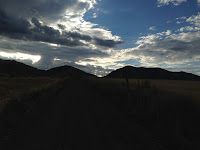 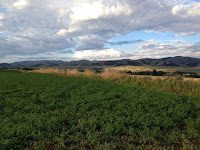 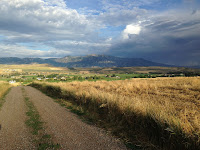 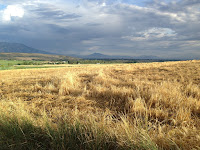 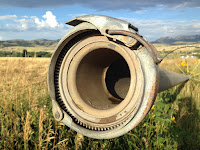