Curioser and curiouser...  The Curiosity rover on Mars is traveling through some strange-looking rock formations.  I'm presuming these are formed by wind erosion...
Posted by Unknown at (permalink) 6:40 AM No comments:

Paradise ponders...  My neighbor Tim, with the water leak I described yesterday, got a plumber over for inspection and advice.  The results were pretty much what we expected: he needs to replace that entire piece of pipe betwixt his well and his house.  That means ... today is “trenching day”.  I'll be over there this morning with my tractor, and we're really going to mess up his yard :)  I'm really happy to have an opportunity to repay the extensive help Tim gave me last year.  Hopefully we can avoid breaking any more pipes or electrical wires, but both are unfortunately quite possible.  Something underground would have to be mighty tough to survive an encounter with my backhoe...

Yesterday was a cold, drizzly day; unpleasant to be outside in.  Today should be clear, sunny, and dry – a good day for trenching.  Tim has visitors over the weekend, so we can't continue the work until Monday – and the forecast for Monday is for temperatures in the low 40s, and lots of rain.  Actually, it's about the same for Monday through Wednesday, except that on Wednesday the forecast is for snow.  After today, it looks like almost a week before we can continue the trenching work!  I'm guessing two to three days to complete the trench, but it could be more if we hit unanticipated obstacles.  Our experience so far makes me think that's likely :)

Today the solar panel installers are scheduled to put up our installation: about 20 panels on the shed's upper roof, a high-voltage DC cable between the shed and the house, the inverter and controller in our house's garage, and the connection between the inverter and the circuit breaker panel.  There's also a new electrical meter going in.  They're telling me that they can do it all in a single day, as they'll have a “full crew” (whatever that means!) here, but I'm a bit skeptical of that.  Part of the job includes some horizontal boring under our paved driveway, and I'd really like to watch that take place.  Unfortunately, I'm almost certain to be trenching at the moment they do that.  Dang it!  On the other hand, maybe they won't actually finish the job today, in which case I most likely can watch them...
Posted by Unknown at (permalink) 4:41 AM No comments: 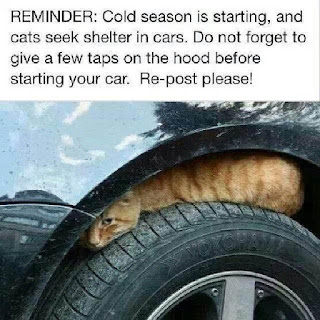 It's that time again...  At least, it is in Paradise.  My lovely bride passed this along, and it's well worth remembering – just a few seconds of your time could save a cat's life...
Posted by Unknown at (permalink) 4:20 AM No comments:

British cheek (and a rant)...  A London coffee shop was ordered to take down its sign, because it was “offensive” (a word that's beginning to offend me all by itself!).  Look what the coffee shop did in response – it's hysterical, cheeky, and most likely very good for their business.  I wonder how the originally offended people are feeling about this development?  Passed along by reader, friend, and former colleague Simon M...

The notion that we have some obligation to avoid offending others is about as un-American as you can get.  There's a very large distinction between choosing not to offend someone else (a choice I make frequently around my predominantly Mormon neighbors :) and being obligated to do so.  The former is your free choice, and should you offend someone else (either deliberately or inadvertently), that's a great example of the exercise of America's key (and nearly unique) freedom of speech.  You don't have to think very hard to come to the understanding that our freedom of speech is all about that freedom to offend someone else (or the government) if we want to.  There's really no other purpose for that freedom.  “Freedom of speech” and “freedom to offend” are really one and the same thing.  You cannot have one without the other.

When I was a much younger lad, the liberals – what we'd call “classical liberals” today, but back then they were the only kind – were the ones defending our freedom of speech, and the conservatives wanted to curb it.  I can't think of a better example than the desecration of the American flag.  In the '60s, laws were on the books, and enforced, that made it illegal to (for example) burn the flag, or stomp on it on the streets.  Personally I find such behavior offensive, and I would never do that myself – but the Supreme Court held (correctly, in my view) that such behavior was a form of speech, a symbolic way of protesting the U.S. government's actions – and as such it was protected by the Constitution.  Liberals promoted that freedom; conservatives opposed it.  Today the situation is completely reversed.  The liberal-dominated institutions (especially, at the moment, our universities) are doing their level best to create, impose, and enforce speech codes that would make particular kinds of speech illegal.  Naturally it would be the kinds of speech that they decide is offensive.  This is not happening without controversy and without resistance, but nevertheless the liberals are making “progress” toward their newly-acquired goals of limiting freedom of speech.

That moves us toward the European norm, where speech is limited in ways that I suspect would surprise and dismay most Americans.  It's not a norm I want to live under, and it's my fervent hope that the liberals in America fail in their efforts.  I'm afraid, though, that they're succeeding ... and there aren't many other places I'd care to live that have anything like our (alleged) freedom of speech...
Posted by Unknown at (permalink) 4:15 AM No comments: