The other night, as I was getting ready to go to bed, I noticed Miki (our youngest field spaniel) standing just inside our bedroom door, between our bed and a bookcase.  He had a funny look on his face; to me it looked like he was afraid of something and hiding.  I petted him a bit, trying to comfort him, but he wouldn't budge.

A few minutes later, Debbie came into the bedroom and immediately recognized his behavior as “guarding behavior” – he was guarding something from our other dogs.  But what?  We couldn't see anything there that would interest a dog.

After a few mintues of trying various things, we figured out what he was interested in – something behind the books on the lowest shelf of the bookcase (which is right on the floor).  Our first thought was that some little critter had zoomed across the floor and hidden itself behind the books.  We have any number of little critters out here that could do that, ranging from cute little desert mice that occasionally make their way into the house somehow, to less benign things like scorpions and baby rattlesnakes.

Naturally, it was my job to figure out what was behind the books.  Miki watched the proceedings with great interest, clearly eager to get at whatever we'd reveal.  So, very carefully, I started pulling books off the bottom shelf so I could see behind them.  On about the third book, the culprit revealed itself: a wild dog biscuit fragment.  How that little piece of dog biscuit got behind our books, we have no idea.  Nor do we know when that happened – those books haven't been touched for months, so it could have been quite some time.  But Miki's little cold, wet nose obviously led him to the shelf on that day, and he sure as hell wasn't going to let some other dog capture that biscuit!

Of course we let Miki eat his prize, which he did with evident satisfaction...
Posted by Unknown at (permalink) 5:52 AM 1 comment: 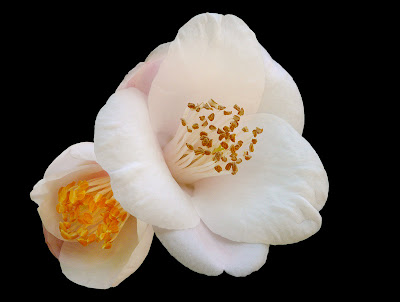 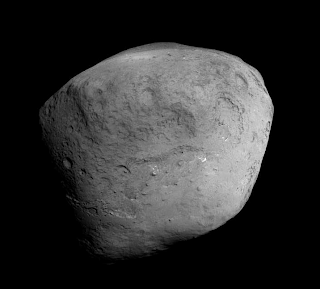 After its initial mission was successfully completed, the Stardust robotic explorer had some extra fuel.  After holding a contest for ideas on what to do with this, NASA picked a proposal to revisit the comet Tempel 1, which was first visited by the Deep Impact mission back in 2005.  NASA named this new “bonus” mission Stardust-NeXT.

After a lot of work and some very tricky orbital mechanics (to keep the fuel use low), on Valentine's Day (Monday) Stardust-NeXT made a successful near pass to comet Tempel 1, collecting all sorts of science data including a spectacular series of images like the one at right (via APOD, of course).

Total cost of this scientifically fruitful mission: less than the cost of shipping Tang to the International Space Station.

Niall Ferguson is one of my favorite authors, with a series of non-fiction books covering a variety of topics in history and economics (often blending the two).  They're uniformly excellent, very readable, and I recommend them often to my friends.

I had no idea that Mr. Ferguson appeared as a pundit on TV (since I rarely watch TV!), but yesterday I happened across this clip yesterday.  In it, Mr. Ferguson (apparently an invited guest on MSNBC) eviscerates the rather obvious pro-Obama position of the talking heads.  He brooks no nonsense, avoids anything resembling platitudes, and absolutely nails them with those pesky things called facts.  Highly entertaining!  I'd really like to see more like this, but I suspect that Mr. Ferguson's career on MSNBC has come to a screeching halt, for he ran completely off the approved narrative rails...

PC in the Military... 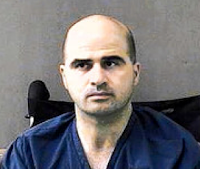 Remember this guy?  He's Major Hasan, the Muslim extremist who happened to be an Army psychiatrist – who attacked his fellow soldiers in Ft. Hood just over a year ago, killing 12 of them.

Dorothy Rabinowitz has an excellent piece in today's WSJ discussing the results of the military reports on the incident.  An excerpt:


In this report, titled "A Ticking Time Bomb" and put out by the Senate Committee on Homeland Security and Governmental Affairs, there is a detail as dazzling in its bleak way as all the glowing misrepresentations of Dr. Hasan's skills and character, which his superiors poured into their evaluations of him. It concerns the Department of Defense's official report on the Foot Hood killings—a study whose recital of fact made no mention of Hasan's well-documented jihadist sympathies. Subsequent DoD memoranda portray the bloodbath—which began with Hasan shouting "Allahu Akbar!"—as a kind of undefined extremism, something on the order, perhaps, of work-place violence.

This avoidance of specifics was apparently contagious—or, more precisely, policy. In November 2010, each branch of the military issued a final report on the Fort Hood shooting. Not one mentioned the perpetrator's ties to radical Islam. Even today, "A Ticking Time Bomb," co-authored by Sen. Joe Lieberman (I., Conn.) and Susan Collins (R., Maine), reminds us that DoD still hasn't specifically named the threat represented by the Fort Hood attack—a signal to the entire Defense bureaucracy that the subject is taboo.

There is something seriously amiss when the military can't (or won't) see the obvious evidence of our main enemy's infiltration into its own ranks.  The political correctness/multicultural movement is bad enough in the civilian world.  In the military, it puts our warriors unnecessarily in harm's way...
Posted by Unknown at (permalink) 5:04 AM No comments: