Things you find when cleaning up...

Things you find when cleaning up...  My office has been a complete disaster ever since my mom died, just over a year and a half ago.  That's because her stuff is strewn everywhere in it, and I've been procrastinating – waiting, really, until it wasn't too awful while going through her things, trying to decide what goes where or to whom.  It's still an emotional roller coaster for me, but at this point I'm not sure it's ever going to get any better.  So I've begun the great office cleanup.

I've just barely started, and already I've found some things that were surprising, and some other things that brought me a nice big smile.

The biggest surprises so far came from skimming through my mom's voluminous medical records – hundreds of X-rays and a couple thousand pages.  Before I shredded these things I wanted to make sure no other papers I'd want to keep were embedded in them (as I have found things I've kept in some very odd places).  This time I haven't yet found any other papers – but I did discover two medical issues my mom had that I had never known about.  The first was from 1998: the detection of a tumor in her brain, 1.5 cm across (so roughly walnut-sized).  I found the X-rays, radiology reports, and a written recommendation from her GP to have surgery, despite it being (as he put it) “quite risky with a relatively high expected mortality”.  So far as I know she never had any such surgery, and I can't imagine how she could have had it in secret – so she must have declined (not all that surprising for her).  The second issue was from 2007, the detection of a lump in her breast and the diagnosis of benign but with a recommendation to have it removed.  Again, I don't know of any such surgery – but that kind of surgery could, I imagine, be done without my ever knowing about it.  On the other hand, it wouldn't surprise me to find out she'd declined that surgery as well!  In any event, neither of these contributed in any way to her death, so if she did decline them, in hindsight it wasn't a bad decision. 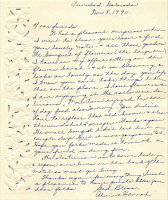 In another box I sorted through, there were some of our personal papers.  One of them was a note from November 1990, from the owner of a motel in Trinidad, Colorado.  If you click the little photo at right, you can read it.  She's thanking Debbie and I for some things we left behind for her, her husband, and their dog.  Neither Debbie nor I remember the incident at all, though it does sound like something we'd do.  We remember the trip very well, though: we were taking a friend from San Diego to Colorado for surgery, and then back home.  We stayed in Trinidad for a couple of days waiting for our friend to be ready, and we must have stayed at Hannah's motel.  We have lots of nice memories of that trip, so this brought lots of smiles. 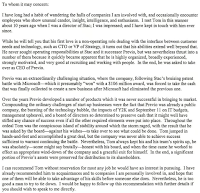 Also in that box was something very meaningful to me, personally.  I've removed identifying information because so far as I know the author of this letter is still around, and I didn't get his permission to use his name.  Friends of mine from the late '90s or early '00s will probably be able to figure it out, though. :)  This is a letter of recommendation written to help me find a job after I fired myself as the CEO of Previo in 2002, because we were winding the company down.  The author knew me better than any other Board member did, so his kind words were something I cherish.  I haven't looked at this letter for over 15 years now, so reading it this morning was almost like reading it for the first time.  I never did use the letter to help find a job, but I did lean on the author a couple of times as a reference.  Both times the prospective employer commented about that reference call being amongst the most positive they'd ever done.  Both times they hired me. :)
Posted by Unknown at (permalink) 12:17 PM No comments: 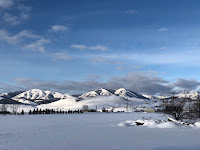 Winter in Paradise...  I walked outside this morning into sunshine, most welcome after a week or so of being socked in (that's a shot to our southwest taken this morning; as usual click on it to embiggen).  The temperature is hovering around 20°F, though it's supposed to get above freezing today.  We'll see – the weatherman's track record is pretty dismal recently.  I wheeled our garbage can to the highway, as today is pickup day.  I'm surprised every week by just how much garbage we generate; on average that garbage can weighs about 50 pounds.  We're just trashy folks, I guess!  :)  After that I did my morning rounds of the bird feeders.  It's cold, so they're very active.  The whole time I was doing these chores I was looking around at the mountains that surround us – so beautiful this time of year!

I spotted a couple of strange things on our driveway that I cannot as yet explain (see the two photos below).  Those two photos were taken a few feet and a few seconds apart.  They're both on a stretch of driveway with identical exposure to sunshine.  Last night it looks like some meteorological phenomenon sprinkled ice crystals all over the driveway, which then partially melted together to form a rough, thin sheet of ice over the entire thing.  But in these two places (and only these two places), these two blobs appeared.  The one on the left seems to have thicker ice there; my theory is that there was water (from the day's melt) on the driveway that froze solid before whatever it was dropped the ice crystals.  The one on the right seems to have no ice crystals – it's as if they all melted.  One might suspect salt, but I haven't used salt even 100' from there.  I have no other theory at the moment. 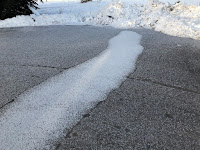 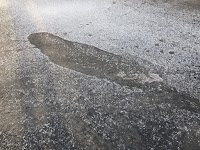 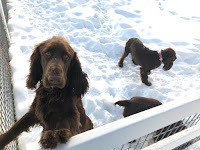 As I walked toward our barn, there was a commotion in our back yard.  It seems there were three spaniels who badly wanted my attention.  That handsome fellow staring me down and demanding a scritch is Mako.  Bored with the proceedings is Ipo, the furthest one in the photo.  And curious Cabo is carefully smelling all the vegetation at the bottom of the fence.  Sure doesn't take much to make them happy.  If you need to be loved, and needed, get a dog...

Turning around after taking that photo, I was standing under the flag that my mom made a few years ago.  It's hanging about 12' high, above my barn's big garage door on its east side.  I especially cherish the sight of that flag on mornings like this, lit by the low sun in the east.  Of course it always brings my mom to mind.  Often, as it did this morning, it also gets me to pondering just how much our country's government has changed since that flag was last the official American flag.  And that got me to thinking, once again, how fortunate we are to live in a part of the country where the general feeling is that our freedoms are being eroded and that they must be defended.  So, so different than California... 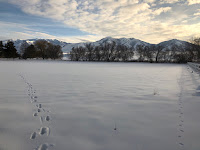 Just before I went in to start working on cleaning up my office, I took this photo to our northeast.  I stood on our property when I took this, but the field in the photo belongs to our friend and neighbor Tim D.  You can see part of our backyard fence at right.  On the left side are some deer tracks, and on the right a small dog or a fox (the latter is quite likely).  I love these winter scenes, and I especially enjoy trying to figure out what wildlife have visited us by identifying their tracks.  This morning as I took out the trash and fed the birds I was able to spot quite a few: deer (lots!), a large dog, that fox/small dog, several house cats, a muskrat and a weasel (in our irrigation canal), some small rodent (most likely a vole), and I think a raccoon.  There are also, as you might expect, about ten bazillion bird tracks in the snow, especially around our feeders.  I can't identify any of them. :)