40 Maps to Understand the World...

Well, some aspects of the world, anyway :)  It is a fascinating collection of maps, visualizing all sorts of things I'd never have thought of visualizing.  Like this one: 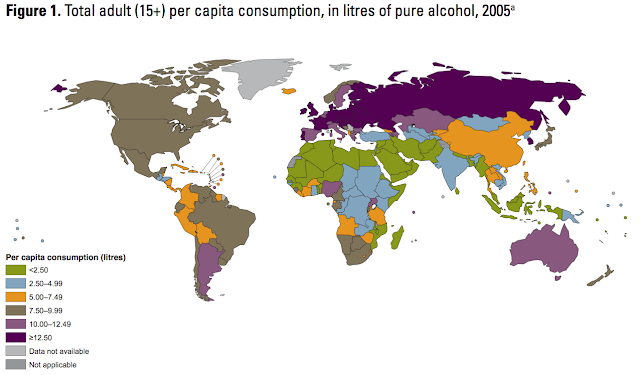 One thing I learned from this is that I'm not even close to the national average consumption for the U.S. – I'd better get to work on that!  Assuming the U.S. average is about 8 liters of alcohol a year, that works out to 3/4 ounce of pure alcohol.  My consumption is nearly entirely in wine, so that works out to about 6 ounces a day.  That doesn't sound like much, but I actually only have wine a couple times a week – which means I'd have to drink about 20 ounces of wine at a sitting.  Yikes!  That would knock me for a loop!

I'm not surprised by the large Russian consumption.  I saw an awful lot of vodka when I was there, and witnessed people drinking in amounts and at rates that I'd have thought were fatal.  But France and England?  I wouldn't have guessed that their alcohol consumption was on a par with Russia's...
Posted by Unknown at (permalink) 9:52 AM No comments:

Kimberley Strassel has an update on the story I posted a few days ago, about an ethanol mandate exemption being secretly granted to a single refinery.  At the time, we didn't know which refinery got the exemption, nor why it was granted.  Now we know the refinery (a small refinery in Louisiana), but we still don't know why.  However, knowing the refinery allows all sorts of investigation and speculation, which Ms. Strassel has done.  It has the stench of crony capitalism at work...
Posted by Unknown at (permalink) 9:08 AM No comments:

I hope this is the start of something big...

The Getty Museum announced its “open content” program, and released hundreds of high resolution images into the public domain.  You can browse the released images on a rather nicely done web page.  The preceding link will show you all the open content digital images of paintings by Rubens of the natural world.  It's easy to change those filter settings to whatever you'd like to see.  If you click on the title of any image shown here, you'll get a page that lets you download it, in awesomely high resolution.

Posted by Unknown at (permalink) 8:46 AM No comments:

I just saw this at The Economist, and it took me by surprise: 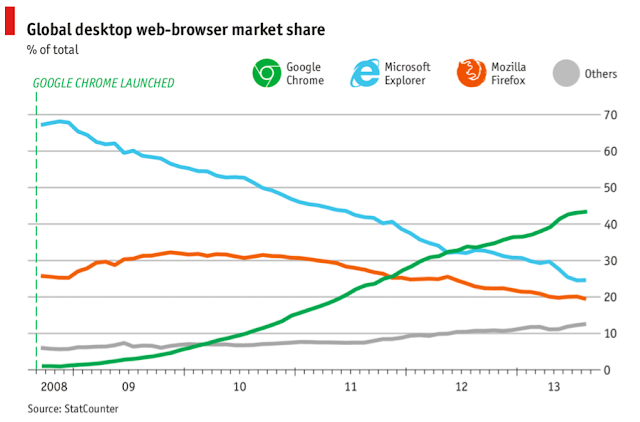 The chart starts with Chrome's release in 2008.  In just four years, Chrome went from nothing to being the dominant web browser.  Firefox's popularity didn't change all that much.  Internet Explorer went from dominance to a distant second place, falling at almost exactly a linear rate.

Chrome and Firefox are open on my desktop all day long.  I like Chrome better for some web sites (especially Google's :), and I like Firefox better for handling tabs (which I use extensively).  Internet Explorer is not allowed on my computer :)  I do occasionally use Safari, though mainly that's for testing web applications.

Anyway, the rapid rise of Chrome caught be by surprise.  I had no sense of that happening at all.  I went to my blog's statistics and looked at browser share, and sure enough, Chrome is on top – followed, though, by Safari and Firefox (apparently an unusually high percentage of my readers are on Macs).  Internet Explorer is missing in action.

There's an interesting map of browser dominance by country at the link...
Posted by Unknown at (permalink) 8:38 AM No comments:

Organize for Action is the child of Obama's permanent campaign, and claims “millions” of members.  Yesterday they called for a rally in Georgetown (on the outskirts of Washington D.C.) to agitate for Congressional action on anthropogenic global warming.

Not one single person.

Awesome.
Posted by Unknown at (permalink) 8:27 AM No comments:

Filthy Filner: It's Come to This...

This sign is on display at all San Diego City Hooter's locations: Now I know that the Hooter's folks are just taking advantage of the Filner situation to garner some positive publicity for themselves.  But, still...
Posted by Unknown at (permalink) 8:20 AM No comments: