Polish snowman and friends...  Jo, our friend from Poland, sent along the photos below.  She said they had a beautiful sunny day.  There's wasn't really enough snow to make a good snowman, but they did it anyway.  I especially like the snowman's hair!  Jo is the person on the right in the middle photo; the other people are her sister-in-law and her nephew.  Her brother helped, too – Jo said the eyebrows are all his fault. :) 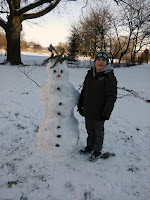 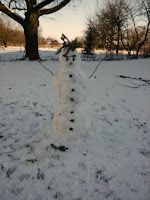 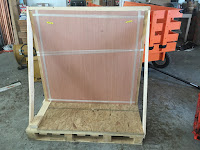 Paradise ponders, sushi, snow, and semiconductor tractor parts edition...  At right is the pallet I received yesterday morning, containing the vacuum table my friend Mike B. in North Carolina built for me.  He has an identical one for himself.  The shipper's manifest says that pallet weighs in at 296 pounds, and I'm guessing that about 75 pounds of that is the pallet and packing materials; the remaining 200 pounds or so is the vacuum table itself, which is invisible in that photo. 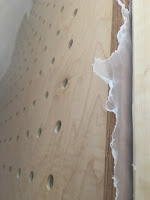 Mike packed that thing using 8 quarter-inch bolts and 42 three inch long torx-drive screws, all of which I had to remove just to get to the vacuum table and it's cover (made of 2x4s and luan plywood).  I didn't actually remove all the packing material, as I can't do anything useful with this table yet.  We still have some more work to do on the rest of the numerically-controlled mill.  But ... I did remove enough so that I could get a glimpse of the vacuum table's top, and that's what you see at right.  That array of holes leads into the inside of the vacuum table, which is basically a giant plenum.  There's a “port” on the bottom of the table to allow connecting it to a source of vacuum – in my case, that will be my dust collection system.  Once I get the actual port and a stand for the table, I'm going to be testing this to see how tightly a part will be held to the table.

I've seen one of these vacuum tables (a commercial affair) in action, and I was very surprised at how well they worked.  Each of those holes is 0.5" in diameter, which means it has an area of about 0.2 square inches.  If the vacuum is 10 pounds per square inch (typical of a shop vacuum cleaner), then there's a force of two pounds from each of those holes, pressing the work piece against the table.  The holes are 2" apart, so if you had a 1' square work piece, it would be covering 25 holes – and there would be a force of fifty pounds holding that work piece against the table.  And that's a pretty small work piece!  There are some tricks we can do with “masks” that fit onto the vacuum table to produce higher forces for smaller work pieces, if we need them.  This vacuum table will let us just throw pieces of wood onto the table, let the machine figure out where they are, then adjust the milling program to fit the actual work piece's position.  Very convenient, and no manual alignment of any kind required.  We like that! 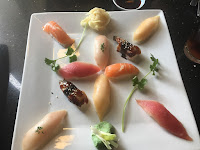 On Wednesday we were in Logan and decided to stop at the Black Pearl for lunch.  We've been there before, and we've always had the avocado egg roll appetizer and either Thai or Chinese entrees.  I felt like sushi, which I'd never ordered here before.  That's mainly because all the best sushi I've ever had has been in dedicated sushi restaurants, or Japanese restaurants that had a sushi chef and bar.  This restaurant is owned by some very nice Chinese folks, and the sushi chef isn't Japanese (I think he's Korean, but I'm not positive).  So I took a bit of a chance, and oh boy am I glad I did!  First, the Black Pearl's sushi is hands-down the best I've had in Logan – nowhere else is even close.  Even better, the basics – nigiri and the standard raw fish rolls – are excellent by any standard.  The photo at right is my order; I had a rainbow roll in addition.  The presentation was beautiful.  The sushi rice was perfect.  The fish, every single piece, was superb.  The unagi's sauce was right up there with the best I've had, with just the right sweetness.  The rainbow roll, which I'm sorry I didn't photograph, was a piece of art, with the pieces of fish perfectly fitted to each other in a spiral, the outside perfectly cylindrical.  I'd only ever seen that before in photographs!  When I got done, I went over to tell the sushi chef just how much I enjoyed his creation – that was some mighty tasty sushi!

This morning I set out to repair my tractor.  I'd ordered the parts about ten days ago, and a couple days ago they came in.  The plastic shroud surrounding the gear shift levers (first photo below) broke when I was jumping off the tractor one time and caught my jacket bottom on the orange lever; the plastic just to the right of the orange lever snapped.  The left turn signal assembly (second photo below) had somehow been broken; I don't know how that happened.  The photos show the new parts in place.  Both of them were surprisingly easy to replace.  The gear shifter shroud is held on by four 10mm screws through the fender below, and they were easily accessible.  The turns signal assembly is held on by a single 16mm nut, and the wires are connected through a plug.  I had that replaced in about 60 seconds!  While I was doing this work, I also replaced the four incandescent bulbs in the left and right turn signal assemblies with LED lamps that I found on Amazon.  I bought ten of those LED lamps for $12.59.  A single incandescent bulb costs $15.90 from Kubota!  I had one burned-out incandescent bulb, and my tractor has 190 hours on it.  The LED lamp replacement should last the tractor's lifetime, they're twice as bright and they use one tenth the power.  Win! 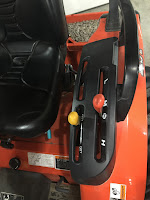 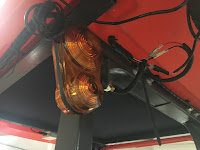 Sometime today I'll be heading out to plow our driveway.   We've got five days in a row of snow in our forecast, and my current plan is to go out once a day to scrape off whatever we got.  If I do this every day, each plowing will have relatively small amounts of snow to get off the pavement.  If I wait until the end of the five day storm, I'll have a foot or more of snow to try to put some where.  Plus it would be nice to be able to get out each day!  :)