Anamorphic illusions are drawings or photographs that look very realistic when viewed from a particular vantage point.  You may be familiar with them from some famous chalk sidewalk art.  Here are a few of a completely different nature:


The author has made the source images available (here, here, and here) if you'd like to print them and try them yourself!
Posted by Unknown at (permalink) 7:16 AM No comments:

Here's a startup offering a free DNS hosting and management service (made by Geeks!).  Until they figure out how to make money at this, I'd be a little leery of having a dependency on them...
Posted by Unknown at (permalink) 6:54 AM No comments:

It's not a surprise that more babies are born on some particular dates (month and day) than on others.  The distribution of those more “popular” dates was a big surprise to me.  For instance, all ten of the ten most common dates for babies to be born are in September (where my birthday is).  Here's a heat map showing those dates (and you can find an interactive version here). 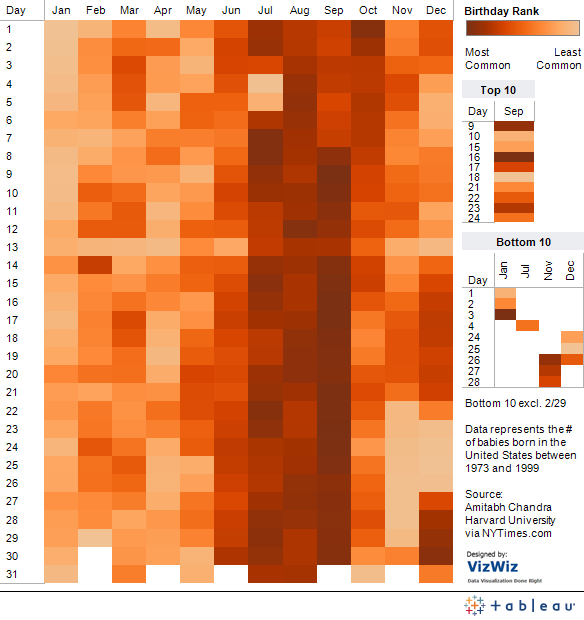 English is a Scandinavian Language?

Jan Faarlund, a professor of linguistics at the University of Oslo, Norway, makes a very interesting claim: that Old English didn't evolve into Modern English (as is the general consensus of linguists today).  Instead, he says, Old English simply died out after the Vikings invaded England, and Modern English evolved from the Vikings' language – much influenced by the Old English of the people they conquered.

The history of languages is an area that's long interested me, though I haven't had the opportunity to immerse myself in it very much.  One reason why it fascinates me is that it's one of those areas of science that is extremely volatile: linguists' understanding and current models change very rapidly.  Just within my adult lifetime there have been something like five or six “revolutions” in our understanding of the history of the world's languages.  If Faarlund's claim ends up being verifiable, it's yet another example of this volatility...
Posted by Unknown at (permalink) 6:42 AM No comments:

CoyoteBlog has another interesting observation on the motivations of politicians (and, by inference, one of the fundamental reasons why democracy is broken).

Every time I get started down this particular line of thinking, I end up concluding that only a revolution (whether at the ballot box or otherwise) is going to get us off the path of doom.  I was hoping for a ballot box revolution earlier this month, but obviously that didn't happen.  Will there be one in 2016?  Or is it too late already?  I see three very broad possibilities:

1.  Most likely: The Obama administration muddles through, kicks the fiscal can down the road yet again, and some sort of slow economic recovery occurs.  The Republicans keep their House majority.  The 2016 election will then be another close, toughly-fought battle between two parties with little daylight between their probable governing styles.

2.  Possible: The Obama administration screws things up in ways that are impossible for even the most blinkered partisans to see.  The Republicans lose their House majority.  There are many opportunities for this: fiscal management, Afghanistan, regulatory weight, etc.  The 2016 election will then be a referendum on how to recover from whatever the Obama-provoked disaster was.  The Republicans will have the natural advantage of not being in Obama's party, and there's always the interesting possibility that the Tea Party will emerge as the champions of the most popular fix.  If the disaster was particularly profound (less likely), then there's even the possibility for that ballot box revolution I hoped for this time.  Not a particularly savory option, but one of the few that looks like it has the chance of a good outcome that doesn't involve violence.

3.  Least likely: The Obama administration presides over a spectacular economic recovery.  Democrats take the House majority.  Businesses grow strongly, the stock market soars, the war in Afghanistan ends in some satisfying way, no new wars start, and even hyper-partisan commentators start saying positive things about Obama.  The 2016 election will then be the Democrats to lose; all they have to do is field a plausibly “Obama II” candidate.

An interesting analysis for anyone considering leaving the worst-run state: California.  The results are available in tabular form and in text form.

Debbie and I are experiencing a cyclical emotional reaction to the thought of leaving California.  The cycle starts with a gradually increasing sense of regret and unease at the thought of leaving our friends, places we've come to love, and so much that's familiar and comfortable.  Then we'll hear a piece of news (most recently, that the takers in Sacremento are seriously considering a radical rise in the commercial property tax rates)...and we'll snap back to “Oh, crap, we've got to get out of here!”

This analysis is clarifying for the simple reason that it sets down in tangible form the real (and quite striking) differences in the way various states are run...
Posted by Unknown at (permalink) 6:18 AM No comments: