Reading the lamestream media news reports about the recent East Coast heat wave, you'd think that the world was coming to an end.  Headlines trumpet things like “3,000+ Records Broken!”, and the text of the articles implies that nothing like this has ever been seen before.

The graph below is courtesy of the indispensable Watts Up With That?.  It shows the number of heat records broken for each year since 1892.  This year isn't even going to be close to the top.  The early part of the last century (before all those carbon-emitting SUVs!) is clearly far “hotter” (at least in this limited sense) than the most recent decade. 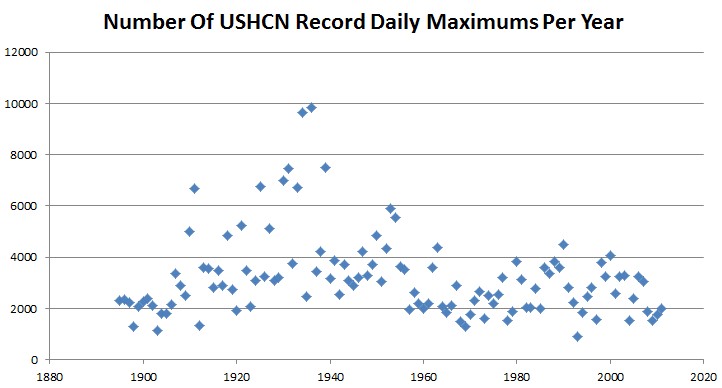 The Trouble With Models...

Computer models of real-world phenomena all have the same weakness: the value of their output depends completely on the validity of the data and assumptions incorporated in the model.  Business folks are very familiar with this weakness, as it plagues the world of financial forecasting.  Climate models, I (and others) have long argued have the same problem – they're dependent on data and assumptions that have not been verified.

Today comes news of yet another such assumption: how heat is transported from inside the Sun to the outside (where it is radiated to the Earth).  This matters intensely to climate models, as their primary energy input is solar radiation – and if the models use the wrong assumptions, in particular, about variability of solar radiation, then...they'll just be wrong...
Posted by Unknown at (permalink) 4:40 AM No comments:

Summer of Recovery: NOT!

This pretty much says it all, doesn't it?  If you're not familiar with EMRATIO, it's sometimes called the “participation rate” – the percentage of the civilian population who are working at any given time. This is (to my mind, at least) a far more useful indicator than the “unemployment rate” trumpeted in the media – that number is “adjusted” for all sorts of things, and doesn't really tell us very much.  EMRATIO, on the other hand, is the raw data.

Obama and his fellow Democrats have cost us 12 million jobs.... 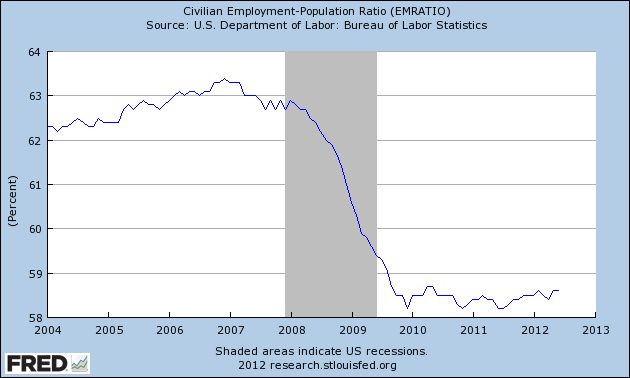