Posted by Unknown at (permalink) 6:32 AM No comments:

The situation on the Korean peninsula looks very precarious to me (and to many other observers).  There's the classic, oft-repeated political tension caused by the provactive acts of one party – politicians are lining up either in the appeasement camp (though of course they describe it as “caution” or some other positive word) and the stomp 'em into the ground camp (couched of course as “consequences” or some such).  But however they word it, the choices are essentially between appeasement and attack.

A middle ground seems impossible on this: if one country is blatantly attacked by another, causing deaths and the destruction of property, there really are only two choices: either one responds or one does not.  Both choices have consequences.

Personally, I lean toward “attack”, though not necessarily in the military sense.  I can see at least two different responses that might work: either economic sanctions of the effective variety (very difficult to achieve unless China reverses its policies toward North Korea), or an obvious retaliatory military action (say, sinking the entire North Korean fleet, which I think consists of about 12 vessels).  Both of these actions carry the possibility (perhaps even the probability) that North Korea will escalate the conflict by attacking South Korea.  We know that in the long run North Korea would lose such a conflict, but in the short run the damage to South Korea might be considerable.

This is exactly the sort of threat that every penny-ante dictator uses as his real weapon, with the real objective of short-term benefit from his adversary's appeasement.  We're decades down that road with North Korea; none of our appeasing moves have brought tensions down one whit.  In fact, quite the opposite.  I think it's time for action.

Then there's the political reality of America's current administration.  It seems most unlikely that they could ever rouse themselves to effective retaliatory action, or even effective backing of our South Korean ally (other than through words).  If I were in the South Korean government, I'd be quite nervous about this...
Posted by Unknown at (permalink) 4:55 AM No comments:

Fascinating set of avalanche diagrams for various hash functions.  Like many analysis techniques, these take advantage of our perceptual system's ability to digest information rapidly.  FNV is much worse than I expected...
Posted by Unknown at (permalink) 4:41 AM No comments:

Copernicus (1473-1543) was the astronomer who challenged the Roman Catholic Church's dogma of Earth-centricity (by demonstrating that the Earth and the other planets revolved around the sun), and was condemned for his excellent work.  Yesterday, in a slightly more enlightened times, his remains were exhumed and reburied – now honored by the church that once condemned him...
Posted by Unknown at (permalink) 4:38 AM No comments:

If I had to choose one person who was most responsible for my continuing interest in mathematics, it would be Martin Gardner (through his Scientific American column “Mathematical Games”.  This was one of the features that I most looked forward to every month, a new adventure, often into some branch of math I'd never even heard of before.  His columns made math both fun and relevant to other things I was interested in.

Martin Gardner died Saturday at age 95.  Millions around the world will miss him, but his 50 books and hundreds of columns in Scientific American, Skeptical Inquirer and numerous anthologies survive him...
Posted by Unknown at (permalink) 4:33 AM No comments:

Well, this looks encouraging (click to enlarge).  It looks like many fewer people are searching for unemployment-related topics these days.  We had one other dip near the beginning of last year, but other than that the level has been roughly steady since the end of 2008.  Let's hope that this is a continuing trend, and a leading indicator on economic recovery.  Oh, and let's also hope that Greece et al don't drag us all down into the economic swamps, too...

Sheesh, that's a lot of hoping, isn't it?
Posted by Unknown at (permalink) 4:25 AM No comments: 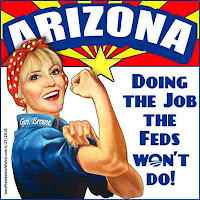 Labels: Poster of the Day

Where to be a Tourist...

Interesting “heat map” color-coding the entire world based on how many photos are taken and posted on Google Maps.  There are some big surprises for me in here.  Like any other Google map, you can pan and zoom all you want...
Posted by Unknown at (permalink) 4:19 AM No comments:

What she said...
Posted by Unknown at (permalink) 4:17 AM No comments: