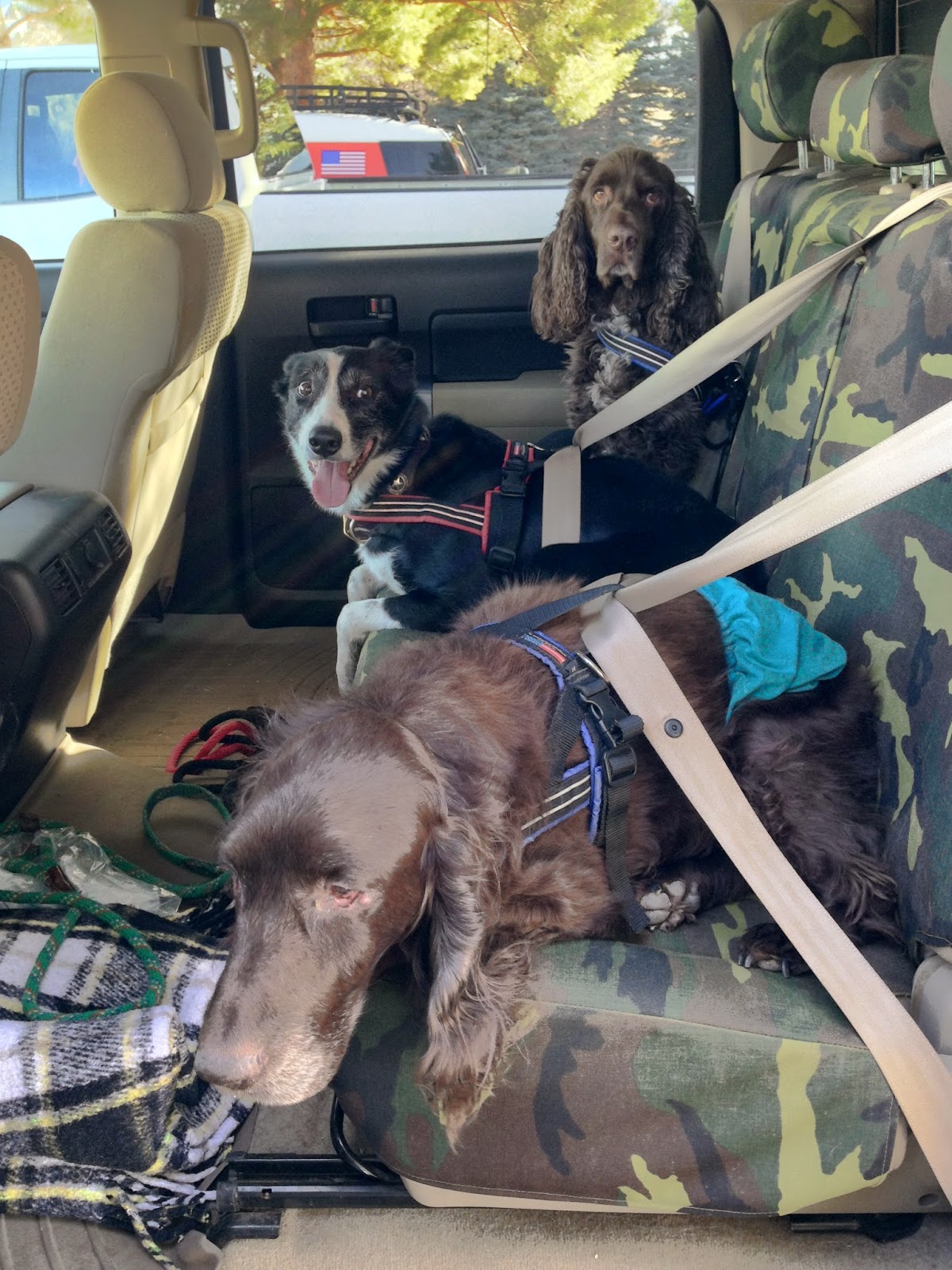 Wine run...  One of the few less-wonderful things about living in Northern Utah is the dearth of interesting places to buy wine (and, worse, the illegality of having wine shipped here – so we can't even buy it online).  There are state liquor stores that have a very conventional selection of wine, and that's it.  However, we live close to the border of the slightly more liberated state of Idaho, where there are actual wine shops.  So yesterday we made a run up to Pocatello, where we visited a couple of small-but-nice wine shops and stocked up.  Our little wine refrigerator is now full of a nice selection of interesting-looking wines.  Yay! 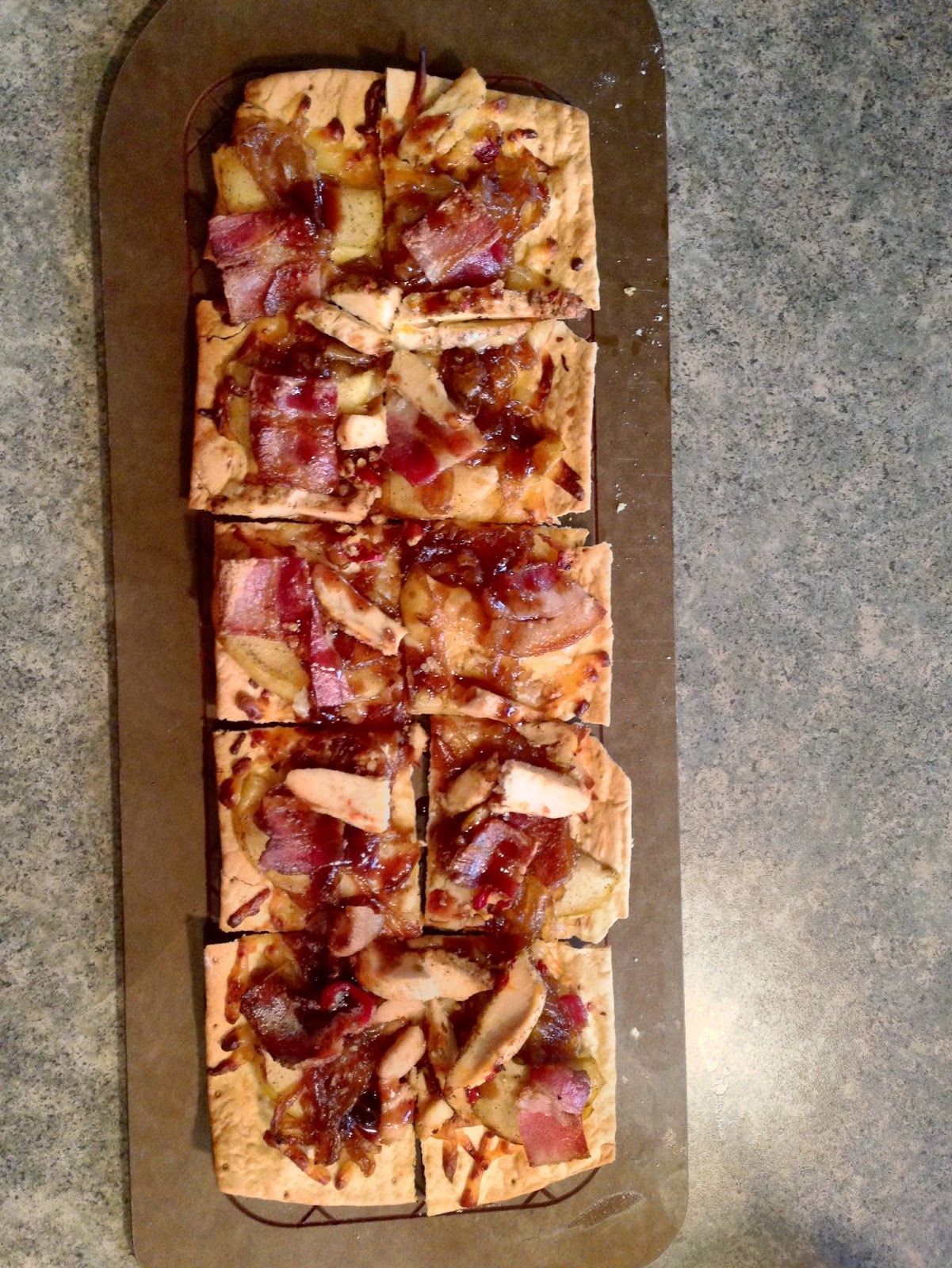 The scenery both ways (we went by US 91) was lovely.  We saw an eagle's nest, lots of geese, some swans, and eighteen bazillion magpies.  The dogs were all treated to a day in the car (they all love riding in the car), and all three of them fit cozily in the back seat of Debbie's truck (above right).  We also stopped at the MacKenzie River Pizza Company, where we had some delicious flat-bread (mine, at left, was chicken, apple, smoked bacon, and caramelized onions, drizzled with bourbon BBQ sauce – yum!

When we got home in the early evening, our front porch was covered in parcels from UPS.  One of them contained three lamp shades we'd ordered online to go with our new lamps (which haven't arrived yet).  The shades are made of handmade paper with leaf outlines in them, stitched with rawhide to an iron frame.  I don't normally think of lamp shades as something that you'd really even notice, but I was just stunned when I opened the box and saw them – they're the most attractive lamp shades I've ever seen.  When the lamps come in and I can light them up from the inside, I'll post a photo of them.
Posted by Unknown at (permalink) 6:40 AM No comments:

The giant middle finger...  Megan McArdle, in a recent post about the irrelevance of Scott Walker's dropping out of college, said this:


The fact that we seem so fixated on events decades past is its own dire signal -- of the way that America's Mandarin class is starting to think about college education not merely as the basic credential required for many of the best-paying jobs, but also the basic credential required for being a worthy, capable person. This is not merely untrue, but also a giant middle finger raised to the majority of upstanding American citizens who also didn't graduate from college.

I'm one of those citizens, and I've experienced far too much dismissal simply because I didn't have that credential.  Thank you, Megan.
Posted by Unknown at (permalink) 6:25 AM No comments:

Heliotropium angiospermum...  Via BPOD, of course...
Posted by Unknown at (permalink) 4:06 AM No comments:

I don't know who to credit (?) for this monstrosity, but it's been floating around for quite a while. I first ran into it about 15 years ago. To test an integer for primality, you first convert the integer to a string of 1s (e.g., 5 becomes 11111, 7 becomes 1111111, etc.).  Then you see if the regular expression matches.  If it does, the number is not prime.  If the match fails, the number is prime.  I read a decent explanation of how it works this morning.

So why do I call this a monstrosity?  Well, it's a bit like a carpenter using repeated hammer blows to cut a piece off a 2x4, instead of using a saw.  It's the wrong tool.  The hammer is very useful – for driving nails or punishing regular expression abusers – but it's not good for cutting a piece of wood...
Posted by Unknown at (permalink) 3:32 AM No comments:

The third law of regulatory bureaucracies...


Any bureaucracy established to regulate an industry will become, instead, the protector of that industry and its incumbents.

Ever since I first read that, I keep coming across more and more examples of it – and zero exceptions.  It's like a natural law controlling how government screws up.  This morning I read above yet another example: the FDA, instituted to regulate safety and efficacy in the pharmaceuticals industry, has instead become a protector of the industry.

If the protection of the incumbents clause doesn't immediately make sense, here's what that means: these bureaucracies help the large existing (i.e., incumbent) companies they regulate by making it more difficult and expensive for new competitors to enter the business.  The incumbent companies most definitely understand this, leverage it, and encourage it.  We saw this recently with the support of “net neutrality” by large ISPs: they know that the regulatory morass engendered by the 332 page FCC proposal will ensnare new competition in a bureaucratic mess that they simply cannot afford to deal with – while to them, with their large and established business, see it as a small annoyance (even though it requires an army of accountants and lawyers).

So far as I can tell, the growth of bureaucracies are an absolutely inevitable result of the age of any given government – let enough decades go by, and the bureaucracies grow, like mold on old cheese, toenail fungus, or age-related infirmities.  The only cure validated by the historical record seems to be revolution and the formation of a new, bureaucracy-free (for a while!) government.  I've often wondered if the Internet enables a new way to disrupt bureaucracies, but I haven't thought of any realistic ways to do that.