My brother Scott ... makes driftwood sculptures, but I don't think he's ever made one quite like this (click to embiggen).  It's by James Doran-Webb, and it's installed at the Montebello Garden Hotel in the Philippines.
Posted by Unknown at (permalink) 3:51 PM No comments:

Paradise ponders...  The solar guys showed up again today, but they didn't make near as much progress as they wanted to – the cold and the mud slowed them down a lot.  They'll be back on Saturday to continue.  Today they got the conduit and box installed at the meter end.  Remaining is a bit of conduit and a box on the shed end.  This is turning out to be a much bigger job than they had anticipated, mainly because their salesman did a poor job of estimating it.  I suspect he's going to hear about that, if he hasn't already.

Elray the well driller now has casing all the way down to 281' deep.  He got delayed today by running out of gas for his welder; he had to run into Logan to get some more.  Then he got side-tracked by a field full of trailers for sale just south of Hyrum, one of which was exactly the kind of 5 ton dump trailer he coveted.  I think he's going to buy it :)  So it won't be until tomorrow that he drills down past that collapsing sandstone layer.

Yesterday when we went up to Hardware Ranch, we saw a stray golden retriever wandering around out in the boonies, not near any homes.  She looked partially emaciated, like it had been a week or so since she had a good meal.  She'd come to within 25' or so of us, but we couldn't get her to come any closer.  Today we went back with some dog treats and a leash to try and find her, but we didn't see any sign of her at all.  We're hoping someone has rescued her, and she's not out there all alone in the snow and mud.  It was quite beautiful up there today, with snow all around us: 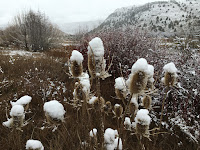 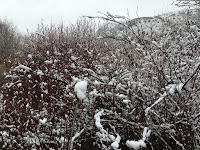 Posted by Unknown at (permalink) 3:48 PM No comments:

The lovely, enticing aroma of bacon...

The lovely, enticing aroma of bacon...  Specifically, applewood-smoked bacon made by a local butcher and never packaged.  Quite possibly the best bacon we've had, evah.  Available in apparently infinite quantities at a reasonable price at Macey's.  That smell is now filling our house, because Debbie made us a bacon breakfast.  Just bacon and tea.  It was wonderful :)
Posted by Unknown at (permalink) 8:18 AM No comments: 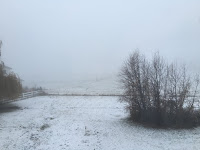 Winter has apparently arrived!  It's a bit early this year :)  That's the view to the north, looking from the second floor of our house.  There's a (cold!) fog rolling in that's already so thick we can barely see our backyard fence.  We had about 2" of snow late yesterday night, but then it started melting immediately as the ground is still well above freezing.  Nothing stuck to the driveways or sidewalks.  One thing the snow did very nicely: it covered up all the trench work the solar installers did yesterday – it cuts left to right across that photo, just past the choke cherry island, but you can't see it at all!
Posted by Unknown at (permalink) 6:35 AM No comments: