Posted by Unknown at (permalink) 8:34 AM No comments:


Two Minnesota engineers were standing at the base of a flagpole, looking up.  A woman walks by asks what they were doing.

The woman took a wrench from her purse, loosened a couple of bolts, and laid the pole down on the ground. Then she took a tape measure from her pocketbook, took a measurement, announced, “Twenty one feet, six inches,” and walked away.

Ole shook his head and laughed. “Ain't dat just like a voman! Ve ask fer da height and she gives us da length!”

Sven and Ole have since quit their engineering jobs and are currently serving in the United States Senate.

Posted by Unknown at (permalink) 6:57 AM No comments:

Today I had to go to Sears. As I approached the entrance, I noticed a driver looking for a parking space. I flagged the driver and pointed out a handicapped parking space that was open and available.

The driver looked puzzled, rolled down her window and said, “I'm not handicapped!”

She gave me the finger and yelled some nasty names at me.

Boy! Some people - and when you're just trying to help them out!

Posted by Unknown at (permalink) 6:54 AM No comments:

“You didn't build that!” has been much in the news recently.  But where did Obama's idea actually come from?  James Taranto, writing at the Wall Street Journal, tracked down this text, which may well have started the whole thing:


There is no such thing as a self-made man. Every businessman has used the vast American infrastructure, which the taxpayers paid for, to make his money. He did not make his money alone. He used taxpayer infrastructure. He got rich on what other taxpayers had paid for: the banking system, the Federal Reserve, the Treasury and Commerce Departments, and the judicial system, where nine-tenths of cases involve corporate law. These taxpayer investments support companies and wealthy investors. There are no self-made men! The wealthy have gotten rich using what previous taxpayers have paid for. They owe the taxpayers of this country a great deal and should be paying it back.

Those words were written by George Lakoff. Read about Mr. Lakoff, and then enjoy the spectacle of Mr. Taranto ripping him to shreds...
Posted by Unknown at (permalink) 6:02 AM No comments:

From Botany Photo of the Day, of course: 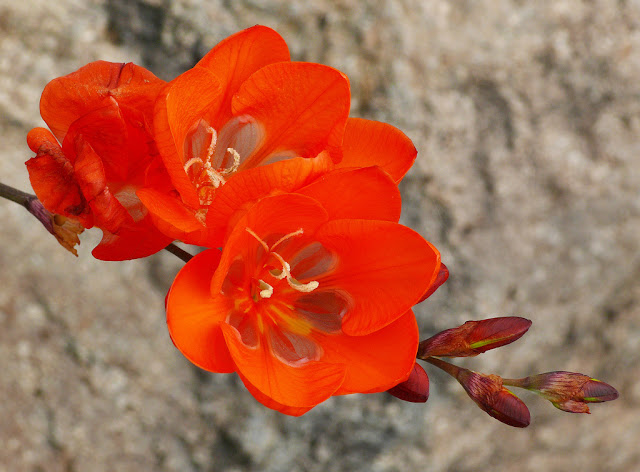 I'm not even gonna try to explain this to the non-geeks :-)
Posted by Unknown at (permalink) 5:42 AM 1 comment:

You Are in the Hands of the Phillistines...

I am appalled, even horrified, that you have adopted Classics as a major. As a matter of fact, I almost puked on the way home today. I suppose that I am old-fashioned enough to believe that the purpose of an education is to enable one to develop a community of interest with his fellow men, to learn to know them, and to learn how to get along with them. In order to do this, of course, he must learn what motivates them, and how to impel them to be pleased with his objectives and desires.

I am a practical man, and for the life of me I cannot possibly understand why you should wish to speak Greek. With whom will you communicate in Greek? I have read, in recent years, the deliberations of Plato and Aristotle, and was interested to learn that the old bastards had minds which worked very similarly to the way our minds work today. I was amazed that they had so much time for deliberating and thinking, and was interested in the kind of civilization that would permit such useless deliberation. Then I got to thinking that it wasn't so amazing—after all they thought like we did because my Hereford cows today are very similar to those ten or twenty generations ago. I am amazed that you would adopt Plato and Aristotle as a vocation for several months when it might make pleasant and enjoyable reading to you in your leisure time as relaxation at a later date. For the life of me I cannot understand why you should be vitally interested in informing yourself about the influences of the Classics on English literature. It is not necessary for you to know how to make a gun in order to know how to use it. It would seem to me that it would be enough to learn English literature without going into what influence this or that ancient mythology might have upon it. As for Greek literature, the history of the Roman and Greek churches, and the art of those eras, it would seem to me that you would be much better off by learning something about contemporary literature and writings and things that might have some meaning to you with the people with whom you are to associate.

These subjects might give you a community of interest with an isolated few impractical dreamers, and a select group of college professors. God forbid!

It would seem to me that what you wish to do is to establish a community of interest with as many people as you possibly can. With people who are moving, who are doing things, and who have an interesting, not a decadent, outlook.

I suppose everybody has to be a snob of some sort, and I suppose you will feel that you are distinguishing yourself from the herd by becoming a Classical snob. I can see you drifting into a bar, belting down a few, turning around to the guy on the stool next to you—a contemporary billboard baron form Podunk, Iowa—and saying, "Well, what do you think about old Leonidas?" Your friend, the billboard baron, will turn to you and say, "Leonidas who?" You will turn to him and say, "Why Leonidas, the prominent Greek of the Twelfth Century." He will, in turn, say to you, "Well, who in the hell was he?" You will say, "Oh, you don't know about Leonidas?" and dismiss him, and not discuss anything else with him the rest of the evening. He will feel that he is a clodhopper from Podunk, Iowa. I suppose this will make you both happy, and as a result of it, you will wind up buying his billboard plant.

There is no question but this type of useless information will distinguish you, set you apart from the doers of the world. If I leave you enough money, you can retire to an ivory tower, and contemplate for the rest of your days the influence that the hieroglyphics of prehistoric man had upon the writings of William Faulkner. Incidentally, he was a contemporary of mine in Mississippi. We speak the same language—whores, sluts, strong words, and strong deeds.

It isn't really important what I think. It's important what you wish to do with your life. I just wish I could feel that the influence of those oddball professors and the ivory towers were developing you into the kind of a man we can both be proud of. I am quite sure that we both will be pleased and delighted when I introduce you to some friend of mine and say, "This is my son. He speaks Greek."

I had dinner during the Christmas holidays with an efficiency expert, an economic adviser to the nation of India, on the Board of Directors of Regents at Harvard University, who owns some 80,000 acres of valuable timber land down here, among his other assets. His son and his family were visiting him. He introduced me to his son, and then apologetically said, "He is a theoretical mathematician. I don't even know what he is talking about. He lives in a different world." After a little while I got to talking to his son, and the only thing he would talk to me about was about his work. I didn't know what he was talking about either so I left early.

If you are going to stay on at Brown, and be a professor of Classics, the courses you have adopted will suit you for a lifetime association with Gale Noyes. Perhaps he will even teach you to make jelly. In my opinion, it won't do much to help you learn to get along with people in this world. I think you are rapidly becoming a jackass, and the sooner you get out of that filthy atmosphere, the better it will suit me.

Oh, I know everybody says that a college education is a must. Well, I console myslef by saying that everybody said the world was square, except Columbus. You go ahead and go with the world, and I'll go it alone.

I hope I am right. You are in the hands of the Philistines, and dammit, I sent you there. I am sorry.

Read all about it.  Awesome!
Posted by Unknown at (permalink) 5:39 AM No comments:

The Jerry Sandusky of Climate Change?

Mark Steyn has a piece at the National Review that makes an interesting point: Penn State has been much in the news because of it's institutional cover-up of Jerry Sandusky's multiple child molestations.  Guess who else works for Penn State?  Why, Michael Mann – he of the infamous hockey-stick climate warming graph – works there as well!  As Mr. Steyn says:


If an institution is prepared to cover up systemic statutory rape of minors, what won’t it cover up? Whether or not he’s “the Jerry Sandusky of climate change”, he remains the Michael Mann of climate change, in part because his “investigation” by a deeply corrupt administration was a joke.

Read the whole thing...
Posted by Unknown at (permalink) 5:30 AM No comments:

Truman and the Atomic Bomb...

President Harry Truman's decision to use atomic bombs against Japan (on Hiroshima and Nagasaki) is, in some quarters at least, a very controversial one.  Post-war “progressive” thinkers (especially) and also some just plain nut cases have called his decision everything from “morally bankrupt” to “a conspiracy against Stalin”.  In my own reading of history, it seems clear to me that Truman made the right call – even from the perspective of the Japanese people, more of whom would have died in an American invasion than did from the atomic bombs.

However, understanding all this with any kind of clarity presupposes a fairly deep reading of the period's history – something that's never going to happen for most people.  The alternative, for most people, is to assume that what they hear in their history courses (if they even have any such courses!) is correct – and a large majority of college-level history courses are teaching that Truman screwed up, making America the moral villains and earning the contempt of the world.

An easily-digestable and concise stating of the case for the wisdom of Truman's choice would be useful.  This video comes as close as anything I've ever seen:

...and every one of them wants a robotic mission, not a manned mission.

I don't suppose the politicians will listen to them, but it surely would be nice if they did...
Posted by Unknown at (permalink) 5:11 AM No comments: