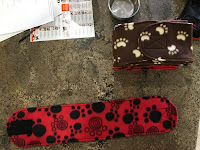 We love living here!, part 39,368...  Michelle H. comes over every week to do the “heavy cleaning” in our house, for over a year now.  She also takes care of our animals when we're away.  In that time she's become a good friend as well.

A few days ago, Debbie told her about the frustration she was having with the diaper holders we use for Mo'i – they're not particularly well made, weren't really the right size, and they were losing their elastic.  Michelle offered to make new ones for us, and Debbie asked her if she could make a few.  Today Michelle stopped by with the result: nine of the most beautifully made diaper holders, exactly the right size, with great Velcro closures.  They're so much nicer than the commercial ones we bought!  The red one in the photo at right is all spread out.  It perfectly fits the diapers we're using, and around Mo'i.  And of course, she wouldn't take any money for them.

It's really pretty amazing to live in a place where we're surrounded by such nice people...
Posted by Unknown at (permalink) 3:25 PM No comments:

Obliterated mailbox update...  I just drove down to the post office to send my tax payment in by certified mail (the one time of the year I'm not happy to see our super-nice post master, Brent).  On the way I passed by the place where a car hit our neighbor's mailbox, and I saw what damage was done.  Well, the mailbox was indeed obliterated, but it's not quite the disaster I'd expected.  I thought (from its appearance) that his mailbox post was likely a square concrete post faced with artificial rock (basically stamped and dyed concrete).  It turns out that it's entirely made of plastic – it's a molded plastic thing that just shattered when it was struck.  So I'm guessing that the impact startled the driver this morning, who then turned right for some reason and ran down into the ditch and struck the other side.

Gary's mailbox should be easy and inexpensive to replace :)
Posted by Unknown at (permalink) 8:00 AM No comments:

Mom goose update...  She's still sitting on her nest in the tree, giving the stink-eye to anyone (or anything) who comes within a quarter mile or so.  None of my neighbors have ever seen or heard of a Canadian goose nesting in a tree, but we've heard from several people second-hand that it's actually quite a common phenomenon.  Tim D.'s daughter is a wildlife biologist who volunteers at the bird preserve on the northeast corner of the Great Salt Lake, and she told Tim that they see several such nests every year over there.  So it's just new to us, not especially unusual.  But still fun!

We're expecting the hatching to happen in the last few days of April or the first few days of May.  We're going to try to see what happens when the chicks leave the nest, but we'll be lucky as heck to actually catch that event...
Posted by Unknown at (permalink) 6:29 AM No comments:

Paradise ponders...  We were sleeping in this morning when Debbie was awakened by a loud bang at around 5 am.  She poked me until I woke up, and told me there were some weird lights visible outside our bedroom.  I got up, found my glasses, and took a look – and saw headlights illuminating the field across the highway from us.  That's definitely weird!  Peering through my mental fog a little more, I noticed the shadow of someone walking around.  My first thought was that there had been an accident, or perhaps someone had hit a deer.

So I threw on my clothes, grabbed a flashlight, and headed out.  First thing I saw was a small car (a new-ish Nissan Versa like the one at right) nose down in the ditch, facing my neighbor's field; its driver-side door was wide open, and the air bag had gone off.  A short distance to the south there was an idling pickup parked, lights on.  I made sure nobody was still in the car, then walked toward the pickup.  A young man came out to greet me.  He had been first on the scene, and he helped the driver out of the little car.  The driver was fine, he told me, and was dialing for help as we talked.  The driver had “not been paying attention” (I'm guessing distracted by a radio, a phone, texting, or some such), had drifted off the road and struck my neighbor's (Gary S.) beautiful stone mailbox post.  I didn't see the mailbox, but I'm assuming it was obliterated.  Police had been called (and they're here now as I write).  So except for the damage to the car and to Gary's mailbox, all is well.  I thanked the young man for stopping to help and dealing with it so responsibly, but around here that is very much the natural order of things.

On Saturday Debbie and I had a late brunch at Angie's.  We drove there thinking we'd get a burger or sandwich, but when we arrived we saw that the special was baby-back ribs, and the soup was vegetable beef.  That settled it: soup and special for both of us.  Those ribs were scrumptious: generous portions of thick, meaty ribs that were fall-off-the-bone tender, and the sauce perfectly matching my tastes.  I detest the intensely vinegary, staggeringly sweet barbecue sauces that seem to be the new American standard – when I have something like those ribs, I want to taste the meat, not the sauce.  Angie's got it just right: enough seasonings to complement the meat's fine taste, just enough sauce to keep the meat from drying out.  We were so stuffed with fine food when we walked out that we didn't even consider going to Aggie's for an ice cream cone :)

I was expecting to help a neighbor (Alan L.) move some shrubs on Saturday, but we had to postpone that until he got the shrubs tied up, and (more importantly) got the gas line marked.  The shrubs are right over top of a place where I know there's a gas line buried, and there's no way I was digging there until that got marked :)

So I had a little unexpected free time in the afternoon.  We'd discovered last week that our FJ's battery had died, and I'd ordered and received the replacement.  It took me about an hour to replace it.  It's a little more complicated than you might think, for two reasons.  First, I had (years ago) fabricated a very sturdy steel box to contain it, and I had to disassemble that before I could remove the old battery.  Second, there are a lot of wires connected to the battery!  The original truck wiring had just one (very large) wire on each terminal, but the accessories I added meant about 10 more wires were needed.  All of this would have been completely unexciting except for one thing: the call of a raptor overhead.

When I heard the call, I got my head out from under the hood and looked up – and saw a bald eagle in a tight circle almost directly overhead, perhaps 120' up.  I watched, entranced, and saw it suddenly stoop nearly straight down to a point about 40' directly south of where I was standing.  That's a short distance into our south alfalfa field, where the eagle had espied a vole – and shortly after had a nice vole lunch.  I watched it catch and kill the vole, then fly off to the east out of sight – presumably to a nest or perch it has taken ownership of.

The battery seems (so far!) to have solved the electrical problem in our FJ.  From the symptoms, I was sure I had a slow electrical draw somewhere.  I'd tested the alternator myself, and knew it was fine.  But the problem turned out to be the battery itself – it could only hold a charge for an hour or so, then would crap out.  I have no idea what the mechanism of that failure mode would be (and I do know a bit about how batteries work!), so I'm still a bit skeptical that the battery was actually the problem.  I'm saving the old battery for a while until I'm certain we've actually fixed it.

After I got done with my (aaargh!) taxes yesterday, I was in no mood for anything else constructive – so Debbie and I watched a movie together.  We chose one that I'd read good reviews of, with an actress I like: Gravity, starring Sandra Bullock.  It's a film about an accident in space, and as such it's something I'd normally avoid – the Hollywood destruction of the laws of physics generally distracts me so much that I can't enjoy the movie.  The reviews I'd read applauded the film's technical accuracy, so I decided to give it a try.  There are a few places where they blew it, but in general those reviewers were right: the movie is quite realistic about how things actually work in space, to the point where I could actually enjoy the movie.  Some of the scenes in that movie were terrifying to me, and all of it kept my interest.  I have no idea how they filmed some of the scenes in weightlessness; they looked real, right down to the behavior of water and fire.  I'd watch it again.
Posted by Unknown at (permalink) 6:13 AM 4 comments: