The Roof Project: We've Got Dormers! 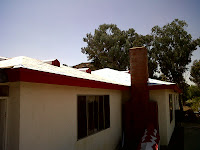 Chris (our roofing contractor) and the boys came by yesterday and started mounting the dormer vents.  They were worried about the rain, and we thought they'd decided not to put them up – but when I came home from work, there were 7 (of 12) dormer vents, installed!

Progress...
Posted by Unknown at (permalink) 6:18 AM No comments:

The Pope and Nancy Pelosi...

Not what you're thinking.  Put your morning beverage down before reading further.  Via my mom:


The Pope and Nancy Pelosi are on the same stage in Yankee Stadium in front of a huge crowd.

The Pope leans towards Mrs. Pelosi and said, "Do you know that with one little wave of my hand I can make every person in this crowd go wild with joy? This joy will not be a momentary display, but will go deep into their hearts and they'll forever speak of this day and rejoice!"

Pelosi replied, "I seriously doubt that with one little wave of your hand? Show me!"

So the Pope backhanded the bitch...

...and the crowd went wild!

Tell me the truth: wouldn't you pay good money to see this? And wouldn't you forever speak of that day and rejoice?
Posted by Unknown at (permalink) 4:47 AM No comments:

Why centralized big government is bad, the venture capital edition...
Posted by Unknown at (permalink) 4:43 AM No comments:

Dick Armey and Matt Kibbe have an interesting piece in today's WSJ.  This caught my eye:


While the tea party is not a formal political party, local networks across the nation have moved beyond protests and turned to more practical matters of political accountability. Already, particularly in Republican primaries, fed-up Americans are turning out at the polls to vote out the big spenders. They are supporting candidates who have signed the Contract From America, a statement of policy principles generated online by hundreds of thousands of grass-roots activists.

Published in April, the Contract amounts to a tea party "seal of approval." It demands fiscal policies that limit government, restrain spending, promote market reforms in health care—and oppose ObamaCare, tax hikes and cap-and-trade restrictions that will kill job creation and stunt economic growth. Candidates who have signed the Contract—including Marco Rubio in Florida, Mike Lee in Utah and Tim Scott in South Carolina—have defeated Republican big spenders in primary elections all across the nation.

I'm not the first to observe this: the Tea Party, taken as a whole, seems to be animated by a mixture of libertarian and conservative philosophy, perhaps leaning toward the latter.  Some things about it remind me strongly of Heinlein's libertarian manifesto The Moon is a Harsh Mistress.  It's going to be quite interesting to see how much the Tea Party does (or doesn't) influence November's results...
Posted by Unknown at (permalink) 4:42 AM No comments: 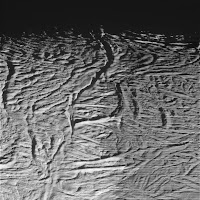 Cassini, the robot explorer that has been orbiting Saturn now since December 2004, is still going strong.  It's most recent accomplishment was a close flyby of Saturn's moon Enceladus.  On this flyby it was looking closely at the “tiger stripes” where jets of water are erupting from the surface.  In the raw photo at right, you can see the “wrinkles” on Enceladus' icy surface.

The annual cost of the Cassini mission (which has done real science in orbit around Saturn for nearly six years) is less than the cost of the ammonia pumps on the ISS (which does absolutely nothing for science except suck money into a black hole).

I want to see more like these...
Posted by Unknown at (permalink) 4:29 AM No comments:

Is This the Kind of America We Want?

Paul Hsieh asks.
Posted by Unknown at (permalink) 4:28 AM No comments: