Tired puppy in Paradise...  Not the dogs – me!  I've finished planting all those trees, but now I've got some seriously tired arms :)  I did most of the really hard work in the cool morning hours, which helped – but I've been going at it hard since 7:30 this morning, with just a couple of breaks.  I'm not used to doing this much hard work with my upper body, and I'm really feeling it.

On the other hand: trees!  Bushes!  We now have a small grove of five 15' to 20' tall paper birches (3" trunks), three well-positioned weeping willows, 10' high and the same across, and a rough group of six purple lilac.  The lilacs are small – 2 gallon pots, 30" tall plants, but they look very vigorous and healthy, and root-bound in the pots.  Two of the willows are on either side of our driveway as you pull in off the highway; once they have a few years of growth they'll make a fine entrance.  The third is in a gap in the row of trees alongside the irrigation canal, where a black willow was felled by lightning some years ago.  All three willows are within 10' of the irrigation canal (which is unlined; water seeps through its sides), so they should be very happy about the water situation.

In a related development, I asked the folks at Zollinger's for a reference to a quality sprinkler installer, and they came through.  I contacted that fellow today, and he'll be out here next week to scope out the job.  I'm thinking of a three-phased approach: one for all our lawn and landscaped area south of our driveway, two for the shed, and three for the lawn and landscaping around our house, once we've finished our planned construction and have it landscaped.  I currently irrigate with a combination of 3" diameter aluminum “hand line” and hoses with sprinklers.  I'm looking ahead a bit, to the day when that is an intimidating amount of work because of my age.  I'm probably good for another 5 to 10 years, but I want to get that taken care of before I can't do it any more :)
Posted by Unknown at (permalink) 3:24 PM No comments:

The Tesla Model X ... looks pretty awesome!
Posted by Unknown at (permalink) 7:10 AM No comments:

Given a choice of laughing or crying...

Given a choice of laughing or crying ...  I'll laugh, then cry.  My mom sends along this additional piece of Putin v. Obama fun: 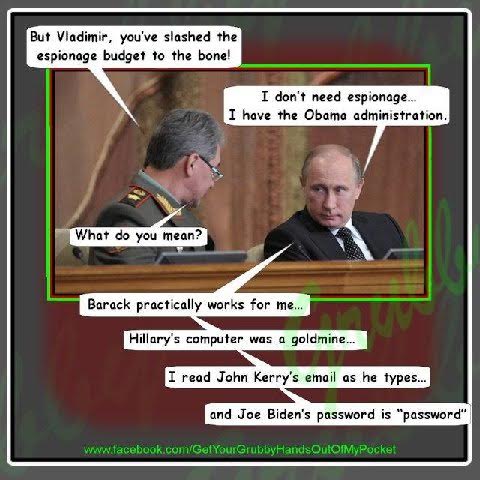 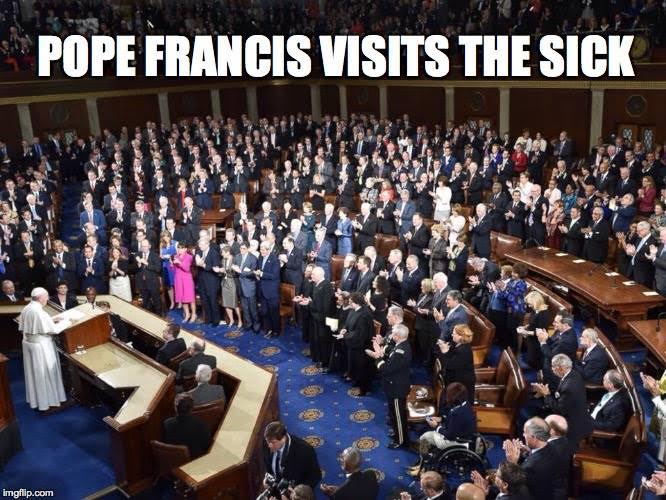 Negotiating with Obama...  I've seen this before, but I don't think I've posted it.  Via my Macified, pistol-packing, big Scrabble word making mama:


Negotiating with Obama is like playing chess with a pigeon. The pigeon knocks over all the pieces, shits on the board and then struts around like it won the game.

Now Snopes tells me that Putin didn't actually say this, and the pigeon chess meme has been floating around for at least 10 years.  But no matter – it's completely plausible that Putin would say this.  Fake, but real!
Posted by Unknown at (permalink) 6:59 AM No comments:

The Arctic Ocean is warming!

The Arctic Ocean is warming!  My brother Scott emailed me this:


The Arctic Ocean is warming up, icebergs are growing scarcer and in some places the seals are finding the water too hot, according to a report to the Commerce Department yesterday from Consulate, at Bergen, Norway.

Reports from fishermen, seal hunters and explorers all point to a radical change in climate conditions and hitherto unheard-of temperatures in the Arctic zone.

Exploration expeditions report that scarcely any ice has been met as far north as 81 degrees 29 minutes. Soundings to a depth of 3,100 meters showed the Gulf Stream still very warm.

Great masses of ice have been replaced by moraines of earth and stones, the report continued, while at many points well known glaciers have entirely disappeared.

Very few seals and no white fish are found in the eastern Arctic, while vast shoals of herring and smelt which have never before ventured so far north, are being encountered in the old seal fishing grounds.

Within a few years it is predicted that due to the ice melt the sea will rise and make most coastal cities uninhabitable.

Then his email casually mentions that this is a report published in the Washington Post, on November 2, 1922!

A quick look on Snopes (where would we all be without that wonderful site?!) told me it was real – but also that the story isn't quite as simple as it sounds.  No matter, it's still a fun story and a good example of the fallibility of prognostication...
Posted by Unknown at (permalink) 6:50 AM No comments:

Migratory birds...  I just found this great resource for when to expect migratory birds in any particular area.
Posted by Unknown at (permalink) 6:44 AM No comments:

Paradise ponders...  I spent most of the day yesterday planting trees.  The crew from Zollinger's showed up right on time, at 9 am, in a big truck with an even bigger trailer – and 39 trees and shrubs for us.  They have a nifty little rubber-tracked forklift that makes moving even the larger trees really easy.  In under an hour, they had placed the eight large trees (weeping willows and paper birches) in their holes (which I'd already dug) and unloaded the potted plants (lilacs and sumac).  Then they gave me a gallon of their famous cider (delicious!), picked up a check, and took off.

Now it was my turn.  I needed to position the trees, fill in the holes, clean up the grass (where it had dirt piled on it), and water the trees.  I couldn't finish it all yesterday; it was too much work for my poor old body to do.  I did get all the tree roots covered, and three of the trees are completely finished.  That leaves me with five to do today, but three of those are not on the grass, so there's no cleanup (which is actually the hardest part of the entire job!).  I'll finish off the big trees today, and hopefully get the lilacs in as well.  They're in little two-gallon pots, so they're a piece of cake to plant.

Yesterday while I was working out in the yard, I saw a few interesting things (photos below). 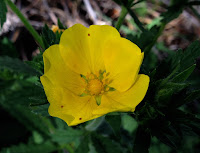 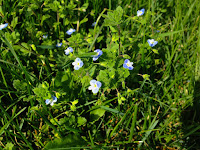 The flowers were pretty splashes of colors in the fall.  The yellow flower was about the size of a quarter; the violet/blue ones about the size of a match head.  The fellow in the middle is a rattlesnake – first one we've seen on our property.  But it was a teensy little rattlesnake, only about 9 or 10 inches long and very zippy.  After I chased it all over the yard, it got tired and stopped – and then very vigorously tried to attack my boot :)  Debbie was all for me killing it (worried about our dogs), but I know from my reading and from talking with our vet that rattlesnake bites on dogs are very rare for dogs in the valley – and not particularly threatening, as the rattlesnakes here are less venomous than the ones we had down in California. 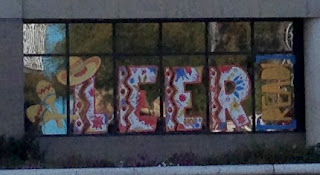 Finally, I'll leave you with this.  The photo at right I took last night as we were leaving our dinner at Jack's pizza (wonderful as always).  The display in that window clearly says “LEER”, and to the right of that is the word “READ” written sideways.  You can see that LEER has a sort of Mexican motif to it.  What's up with that?  Well, it turns out that “leer” is Spanish for “read”.  It doesn't mean what my dirty old man's mind thought it meant.  And here I thought I was going to be surprised by an unexpected aspect of Mormon culture!
Posted by Unknown at (permalink) 6:33 AM No comments: