UT on the Jamul Casino...

In yesterday's Union-Tribune, there was an article talking about the pros and cons of situating casinos in San Diego's backcountry.  The proposed Jamul Casino was mentioned:


Jamul is not unique. The debate playing out in the backcountry town has consumed rural communities throughout the state since voters approved Nevada-style slot machines on California reservations in 2000. San Diego County has more Indian reservations, more casinos and more tribes with state gambling agreements than any other in the nation.

While tribes point to the casinos’ economic benefits to the community, many residents bemoan the change to their rural lifestyle.

A drive into Dehesa Valley east of El Cajon illustrates just how a community can be affected. There, the Sycuan band of the Kumeyaay Nation has built an economic juggernaut fueled by a sprawling casino with 2,000 slots, an expansive bingo hall and 40 tables of blackjack, craps and roulette, along with what it bills as the county’s largest poker room.

Read the whole thing...
Posted by Unknown at (permalink) 5:14 AM No comments:

The King of Photoshopping... 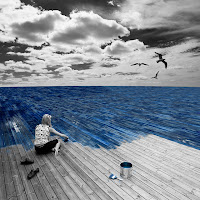 Erik Johansson is a photographer and retouch artist working out of Berlin, Germany.  He's made a name for himself through his remarkable “photoshops”, like the one at right (click to enlarge).

Here's a portfolio of his work, and here's a TED talk he gave last November in London.  He's got an amazing eye for what would make an interesting photoshop, and an equally amazing talent for actually executing the idea.  Great stuff!
Posted by Unknown at (permalink) 5:10 AM No comments:

In the ongoing debates about anthropogenic global warming, one of the recurring issues is that the scientists who analyzed the proxy temperature data (tree rings, dissolved gasses in glacier ice, etc.) did so using software to “correct” the data – but they've never disclosed the software itself, so nobody can either verify or replicate their results.  Furthermore, different datasets cannot be independently subjected to the same “corrections”.

As yet, there is no norm or convention in most areas of science that requires scientists to release this code.  In the case of climatology, when some code has been disclosed (generally involuntarily), one can infer a reason why the scientists held the code close to their chests: it's embarrassingly bad, and full of very evident errors.

This situation needs to change.  Scientific norms and conventions need to catch up with the computer age.  Scientific American has weighed in with a similar opinion.  I canceled my subscription a few years ago when I got fed up with their fawning AGW coverage.  I'm amused (but not surprised) to that in this article they cover the problems caused by undisclosed computer software – but manage to miss mentioning one of the most obvious problem areas, in climatology...
Posted by Unknown at (permalink) 5:03 AM 1 comment: Plain old water ice is far more complex than you might think.  Click the figure at right for a phase diagram (of pressure vs. temperature) for that most familiar of substances...
Posted by Unknown at (permalink) 4:55 AM No comments:

And this is just plain amazing!
Posted by Unknown at (permalink) 4:43 AM No comments:

This is just plain weird!
Posted by Unknown at (permalink) 4:42 AM No comments:

Took the dogs out (all four of them) as usual this morning.  It's a dark and clear night, moonless, with the Milky Way arcing from the north to the southeast.  We went through the usual ritual at the door – all four of them clamoring to get outside, me trying to get the leashes on the three brown dogs while they're wiggling and cavorting.  Race goes out naked – we sort of gave up on leashing him, as he's too darned hard to control with all that rocket-like energy.

All of this was completely normal.  However, once we got outside things changed.  Well, at least for the three field spaniels: they went on full alert.  Everything about their body language said “I'm really interested in this!”  Of course, I had no idea what “this” was – could have been anything at all!

I walked the group down our driveway, alongside the line of pine trees we have planted there.  As we got closer to the end of the pine trees, the brown dogs started acting very interested in the trunk of the last pine tree.  Race was off chasing pine cones, as usual; he was paying absolutely no attention to whatever it was that had the three brown dogs riveted.  I walked (really, the three brown dogs dragged me) toward that last pine, when suddenly a shape detached itself from the pine tree's trunk and scooted just as fast as it could go down our driveway and out the gate.  It was a fox; the silhouette of its tail and head a dead giveaway.  The three brown dogs never made a sound, but they sure wanted to chase it – they dragged me 10 or 15 feet down the driveway before I managed to regain control.

Race chased his pine cone.  I don't believe he ever smelled or saw that fox...
Posted by Unknown at (permalink) 3:49 AM No comments: