Konani, and a few more ponders... 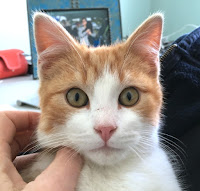 Konani, and a few more ponders...  That's the latest iteration of this cute little guy's name, pronounced co-NAH-knee.  I'm not sure how long this one will last :)  Debbie's been going through names at a record-setting pace, and I can no longer keep up.  If kittens pay any attention to what people call them, this must be one terminally confused little cat! 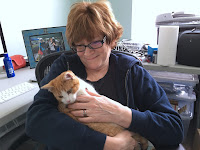 If you know Debbie at all, you'll be unsurprised that Konani is getting lots of attention.  He's still in isolation, in our basement bathroom – but he gets taken on “trips” frequently, usually to our office, for a little one-on-one attention.  Today we visit the vet with him to get clearance for him to join the rest of our kitties.  Yesterday he got some extra attention from our friend Michelle H.  This little guy is much more interested in people than most of our cats are, and is completely unafraid of strangers.  That's slightly unusual in cats, but even more unusual is that he fetches a little ball and brings it back to be thrown again.  We have one other cat (Jahar, our Savannah cat) who does that, but of all the cats we've owned we've never had another who did so. 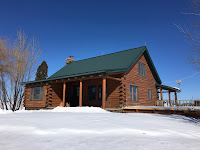 Yesterday morning I drove up to visit with my brother Scott, near Newton, Utah.  The view on the last few miles was simply breathtaking – a near-180° panorama of the snow-covered Wasatch Mountains, to the east.  His cabin was very homey looking in the snow!

Last night Debbie and I drive down to Salt Lake City (SLC) to meet up with our friend Doug W.  We took the opportunity to stock up on wine and beer at the (much larger) SLC State Liquor Store, then met him at (of course!) the Red Iguana.  Debbie and I both ordered the special (chicken poblano with grilled shrimp) because it sounded so good – and it was!  It wasn't the stuffed poblano pepper I was expecting, though.  This was a grilled chicken breast with a poblano pepper butterflied on top of it, then the whole thing drenched in a sauce that was just heavenly.  The grilled shrimp were on top of that concoction, just sitting there like little presents.  We had very happy tummies!  Great company and great food is sure a tough combination to beat...

Doug and his wife Dee live near San Diego, but are up here to attend a conference for a few days.  Dee decided to pursue her genealogy research in the LDS church's facility here instead of joining us at dinner.  She doesn't often get access to a vast library of microfilmed documents like they have here, so being the hard core genealogist that she is, she took a few granola bars into the basement research facility and looked at microfilms instead of having a meal with us at the Red Iguana.  That's what I call dedication!  I tried to imagine making such a sacrifice ... but I didn't get very far :)

I've been accumulating a few photos over the last couple of days that I've neglected to share.  These are all from around our yard.  The first photo is from Saturday afternoon, as I was plowing our driveway.  The sun, not far from setting, peeked through a hole in the clouds to our southwest, illuminating the Wellsville Mountains foothills there.  Beautiful!  The second photo I took on Sunday, looking to our northeast from a second floor window in our house.  This was also near sunset, in a few moments when the clouds clear (that day was nearly solid clouds except for a few minutes of sunshine).  The last two photos I took yesterday, when we actually had some sunshine.  We have icicles everywhere now because of the combination of low temperatures (under 20°F).  On my drive up to see my brother Scott yesterday, I saw some houses with 6' long icicles hanging from south-facing roofs.  Amazing to see!

All the wet snow we got has caused a bit of damage to our landscaping.  We have two pines near the house that have lost large branches (one of them is 5" in diameter).  Most likely we'll find more damage elsewhere, once the snow melts enough to let us walk around.  Beautiful but dangerous, that snow is... 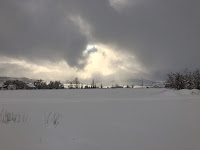 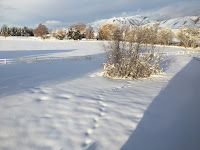 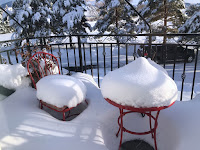 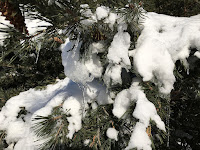