Paradise ponders...  Well, the generator folks showed up yesterday as promised, and much progress was made.  Some photos below shows the work in process.  I'm very pleased with the quality of the work they're doing.  The electrical work is top-notch – no shortcuts are being taken; the best parts and techniques are being used throughout.  They're doing a better job than I could do myself, thanks to their knowledge and experience.  What more could we ask?  The third and fifth photos below are of the generator for the shed; the other three are the generator for the house. 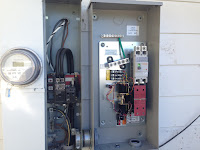 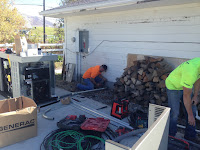 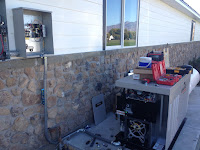 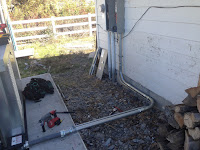 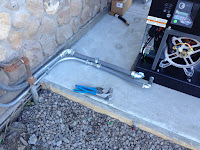 Miki, Race, and I went for an early walk this morning, along the route we used to do every day.  I've been taking alternate routes for a couple weeks, so now the “usual” route is the unusual one :)  The dogs were just as happy as always, in the crisp pre-sunrise air.  The former barley field that had turned green with a grass of some kind is being disc-harrowed; it's just dirt now.  The rig that's doing it is in the second photo, with the dogs for scale.  This modern tractor has far more power than the similarly sized tractors I knew as a kid growing up on the farm, and it is vastly more comfortable for the operator.  First, the cab is heated and air conditioned, fully enclosed in high-visibility glass.  The windows are cleaned with washers and wipers.  The seat is the fancy “active compensation” type, which means that hydraulics move it up and down to cushion the operator from the bumps.  Then, to top it all off, the cab has a Bose sound system built in, with radio, CD player, and a connection for your iPhone.  That's quite a far cry from the teeth-jarring, dusty, fully exposed tractors I drove on the farm!

I love the lighting effects of early morning and late evening.  In the third photo below, you can see the shadows of the Wasatch Mountains (to the east, behind me as I took that photo) on the slopes of the Wellsville Mountains (to the west, in front of me) and their foothills. 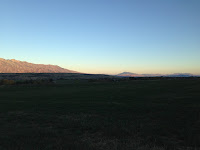 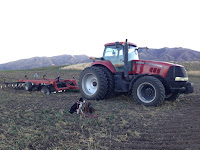 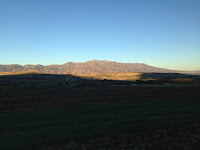 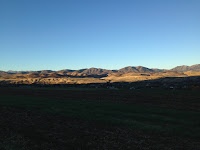