We often hear complaints that the tone of modern campaigning is outrageously uncivil, surely more so than at any time in the past.  I've read quite a bit of history, including in particular a lot of U.S. history.  Such complaints about campaign incivility sometimes make me laugh out loud, because I've read so much worse.  In fact, I'd say that by historical standards our current campaigns are certainly in the 10% “most civil”, possibly even the top 5%.  Many U.S. histories, especially biographies of past presidents, cite old campaign ads and flyers; some are even reproduced.  But that stuff is hard to get up on the web.

The good folks at Reason have done it for me.  The video below (which I just ran across this morning) is from them, and makes the above point very nicely.  It's also quite funny.  And being the good citizens that they are, they even include their sources.  Enjoy!

You Mormons Need to Get With the Program!

One small excerpt from the inimitable Mark Steyn, writing on the Obama administration's response to the attacks in Libya:


What other entertainments have senior U.S. officials reviewed lately? Last year Hillary Clinton went to see the Broadway musical "Book of Mormon." "We reject all efforts to denigrate the religious beliefs of others"? The Book of Mormon's big showstopper is "Hasa Diga Eebowai," which apparently translates as "F*** You, God." The U.S. Secretary of State stood and cheered.

Why does Secretary Clinton regard "F*** You, God" as a fun toe-tapper for all the family but "F***, You Allah" as "disgusting and reprehensible"? The obvious answer is that, if you sing the latter, you'll find a far more motivated crowd waiting for you at the stage door. So the "Leader of the Free World" and "the most powerful man in the world" (to revive two cobwebbed phrases nobody seems to apply anymore to the president of the United States) is telling the planet that the way to ensure your beliefs command his "respect" is to be willing to burn and bomb and kill. You Mormons need to get with the program.

I long for the day when I can be proud of my president again, instead of disgusted.  But in the interval, I'm very glad to have Mark Steyn around to make me laugh...
Posted by Unknown at (permalink) 7:41 AM No comments:

Spoken by Dorothy Woods.  She's the widow of Ty Woods, one of the ex-SEALs killed in Libya last week along with Chris Stevens, our Ambassador to Libya.  She said this during her eulogy to her husband, as reported by Froggy on Blackfive:


RID THE WORLD OF THOSE SAVAGES!

We sleep safely only because of the Ty Woods who place themselves in harm's way on our behalf. I am grateful every day for their existence. And I am greatly moved to see the evidence of the strong support Ty received from his proud wife...
Posted by Unknown at (permalink) 7:36 AM No comments:

Megan McArdle speaks for me on this issue with finer prose than I could muster.

It surely is wonderful to see her blogging again.

But reading the comments on her post makes me want to go find another country to live in...

Posted by Unknown at (permalink) 7:30 AM No comments:

An excellent article in the Smithsonian, summarizing a lot of newly discovered or revealed information about Thomas Jefferson.  Most of this country's founding fathers have had their histories surrounded by a protective cocoon built by misguided historians trying to preserve the heroic narrative I learned in grade school.  Our founding fathers were all too human, though.  Personally, I would rather know the truth about them, as it is generally far more plausible and always provides far more understanding than the too-good-to-be-true historic gruel we've been dealt.  In recent years more and more such revelations have occurred, and I welcome them all.

I like my history served up black; no cream or sugar please.
Posted by Unknown at (permalink) 7:26 AM No comments:

There's a fascinating article in the WSJ($) today that profiles a company that delivers top-notch health care to those who can afford it. The company is Private Health Management, and its CEO is Leslie Michelson. They don't actually deliver the health care themselves – rather, they match up each patient's needs with the absolutely best health care that can be found anywhere in the world for them.  It is an attempt to address the opacity of today's U.S. health care marketplace.  Mr. Michelson has dreams of delivering that services to the masses, not just the ultra-rich.  The conclusion of the article resonates with me:


Americans, says Mr. Michelson, are "extremely good at buying things." But they don't know how to buy health care, and his company can help by giving them the tools they need. "The entire engine of American consumerism is missing in health care. What a preposterous thing."

Preposterous, indeed.  I am fascinated by the ideas underlying this company.  I also want to channel Glenn Reynolds and say: faster, please.
Posted by Unknown at (permalink) 7:21 AM No comments: 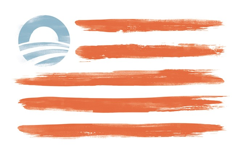 I can't help it; that's how the election “tea leaves” are looking to me.

First: the creepy.  Check out the “Obama version” of the U.S. flag at right.  That flag is for sale on the official Obama web site.  There are only 250 of them (it's a limited edition print), so the listing may disappear at any time – so I've preserved a screen shot of the entire store screen, just in case someone doesn't believe it. 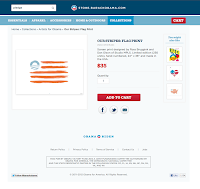 What's creepy about it?  Look how the Obama “O” logo is replacing the standard field of stars for each state.  It's sending a message to me, a creepy message: ”Replace the states with Obama!”  And those red stripes – five of them – look like streaks of blood from the fingers of someone's hand.  Shivers...

And here's another creepy thing: official Obama spokeswoman Jessica Alba asks people to pledge allegiance not to the United States of America – but rather to Barack Obama.  She even asks people to take pictures of themselves with their hands over their hearts (as when you pledge allegiance), like the one at left.  It's way too much like the personality cults of Mao, Stalin, or the various NoKo leaders...

Well, all of that certainly wasn't calculated to make me feel good.  I couldn't help thinking that Romney was running against a new version of Mao, but with competent PR people (and, thankfully, minus the violence).  And I'm not the only one noticing this...

As I drank my morning tea, pondering the above, it suddenly occurred to me that a fixture of previous election reporting – the Iowa Electronic Markets – was conspicuously missing from what I've been reading for the 2012 elections.  If you're not familiar with the Iowa Electronic Markets, it's a futures market (all accessed via the web) where you can purchase “contracts” for all sorts of things.  Essentially it's a legal way to place a bet on some particular outcome.  It's run by the University of Iowa's School of Business, and it's the best of the efforts attempting to “crowdsource” judgment about future events. 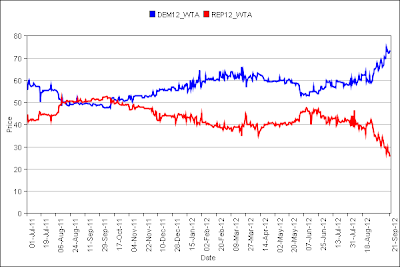 Of relevance here, you can purchase a contract that pays based on the outcome of the 2012 presidential election.  The way these contracts work is quite simple.  In the 2012 presidential election “Winner Takes All” contracts (the most popular by far), you can buy one of two contracts: either a contract that says the Democratic nominee (Obama) will win the popular vote, or a contract that says the Republican nominee (Romney) will win the popular vote.  Each contract pays $1 after the election if the candidate whose contract you bought wins the popular vote, or nothing if he didn't.  Where it gets interesting is how much you have to pay to buy one of those contracts today.  Someone is selling you that contract, and they will set the price based on how likely think it is that they will have to pay out that $1 in the end.  The graph at right shows you the price of those contracts over time; blue for the Democrat winning, red for the Republican winning.

If you're not used to interpreting these graphs, this may not be conveying much to you.  Here's the short interpretation: if you're an Obama supporter, this graph tells you that the wisdom of the marketplace is that Obama is very likely to win the popular vote (I wrote that carefully, for reasons I enlarge upon below).  That graph tells me that right now it would cost me about $0.75 to buy a contract for Obama, and about $0.25 for a Romney contract.  The price for a Romney contract is low for a very simple reason: the person selling that contract doesn't think it's very likely that he'll have to pay off.  The thing that's powerful about a system like the Iowa Electronic Markets is that you're seeing the cumulative judgment of many thousands of people.  It's precisely the same dynamic that's at work on the options markets, or the commodities futures market.  It's as close as you can get to an actual measurement of the probability of a future event like the outcome of a presidential election.  The Iowa Electronic Markets have a good track record – not perfect, but good – in their predictions of political outcomes.  What they're saying right now is that Obama is a 3:1 favorite in the election.  Obummer...

The Iowa Electronic Markets presidential WTA results should be (and probably are) ringing all sorts of alarm bells at Team Romney, and be a reason for the Team Obama folks to be sleeping peacefully at night.  They are not a good omen, most especially the way they're trending (and with a steep slope, too!).  They are not cause for despair – not yet, anyway.  It's still six weeks until the elections, and much can happen in that interval.  But if Team Romney wants to win, they'd better start upping their game, 'cause the tea leaves are not saying cheerful things from their perspective...
Posted by Unknown at (permalink) 7:09 AM No comments: