Day of the dishwashers...

Day of the dishwashers...  That would be today, for me.  This morning I head down to Ogden to pick up our new dishwasher.  It arrived at last!  We had arranged to have it delivered to our house, but on Friday when they called and said it had arrived – they also told us they couldn't deliver it until October 13th.  Yikes!  We've been without our dishwasher too long, and we're tired of hand-washing them.  So I decided to just go down and get it myself.

Once I have it safely here (probably around 11 this morning), then the real fun begins.  First I have to carefully remove some trim strips from the cabinetry around the existing dishwasher.  Then I shut off power to the kitchen, turn off the water to the sink, pull out the old dishwasher, and disconnect its water supply, drain connection, and electrical supply.  The old one I'm hauling out to the dumpster where I'll dump it ignominiously.  Then I will unpack the new dishwasher, connect it to the drain, water, and electricity, and re-install the cabinetry trim strips.  I'm guessing it will take two or three hours, assuming I don't have to run to Lowe's for parts. :)
Posted by Unknown at (permalink) 4:02 AM 1 comment:

Paradise ponders...  Yesterday was mainly a day of bookkeeping for me.  I seem to have drifted into a pattern of episodic paperwork madness, instead of what I used to do: a little each day, as things occurred.  Mainly this seems to be a consequence of the general chaos in my life since mid-May: my mom's move out here and her subsequent death, Debbie's broken knees, the construction work around our house, and the arrival of two cute-but-high-maintenance puppies in our household.  At this point I've no idea whether I'll ever get back to “normal”, whatever that is! :) 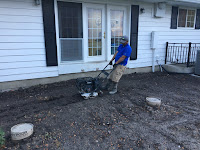 Mark T. is the fellow who is supposed to be doing the grading, sprinklers, and sod in our yard.  Six weeks from our agreement that he do the work, he's four weeks late – about the same rate of lateness as our builder. :)  On Saturday evening, near nightfall, he showed up with his plate compactor to pound all the soil around our deck into submission.  That's him at right, making a concerted effort to get the job done.  However ... the rains of the previous week had the soil saturated with water, and the main effect of running the compactor was to cause about 6" of our mud to become semi-permanently attached to the plate.  After the one pass you see him making, he and I together couldn't budge his machine.  We had to flip it on its side and scrape off the rather large amount of accreted mud.  This job will have to wait until the ground dries out ... and with more rain in the forecast, we've no idea when that might be.

I did take a break yesterday morning for a nice walk, with the puppies on our usual route.  There was rain in the distance, and the clouds made for some dramatic lighting effects: 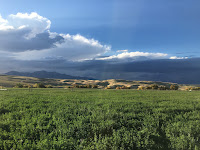 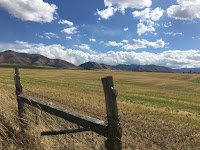 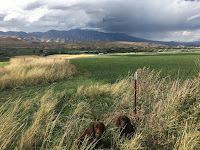 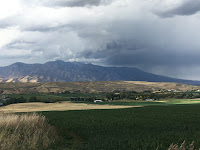 I took a walk with the puppies on Saturday, too.  For that walk we didn't follow our usual route at all.  Instead we walked to the west of our house, along 400 W and some of its side roads down toward the Little Bear River bottoms.  That was a very different walk than our usual route, as we passed a dozen or so homes and lots of dogs, kids, adults, and cars.  That made my puppy-handling particularly challenging, as they were independently getting distracted about 10 times per second, and charging off (equally independently!) in random directions at about the same rate.  On the other hand, they met lots of friendly neighborhood dogs, one aggressively hostile dog (called off by its owner), lots of curious kids, and a whole bunch of friendly adults.  One surprise for me: on four different occasions, an adult called out to me by name and came over to have a friendly chat.  On every one of those occasions, I recognized the person, but couldn't remember what their name was.  I'm just terrible with names.  But it sure was pleasant to discover that so many people living around us knew who I was, and often quite a bit about us.  It was also very nice to see everyone so welcoming to the puppies, who together can be a bit overwhelming.

Earlier on Saturday I drove over to Connor C.'s house.  Connor is the neighborhood kid who alerted us to Miki's whereabouts, and was directly responsible for us recovering him.  I met Connor's mom, who had heard all about me from her husband, whom I'd met the day before.  I told her that I wanted to thank Connor personally, and also to give him the $50 cash reward that we had on offer for Miki's recovery (but which Connor hadn't known about).  She told me that wasn't necessary (which I expected), but that she didn't have any objection.  While I was talking with her, a small crowd of relatives gathered around to listen, all smiling and friendly.  They were gathered to listen to the semi-annual church (LDS) conference that was being broadcast.  I'd deliberately timed my visit during a break in the conference, so they were all free to join us.

So armed with his mom's permission, I had a nice talk alone with Connor, making sure he understood just how grateful and thankful Debbie and I were, and that we knew his concern and initiative may well have saved Miki's life.  He behaved as many of the kids around here would: he demurred, saying that he just did what anyone would have done.  I made the obvious retort, that “anyone” hadn't – just he did.  Then I told him about the cash reward, and it was obvious from his face that it was the first he'd heard about that.  He told me it wasn't necessary, and then when I told him we'd really like him to have it, tried to get me to reduce the amount.  I asked him to think about doing something good for the world with the amount he thought was in excess, and then with a happy smile he took it.

That was a very satisfying experience...

And speaking of Miki...  Since he returned from his walkabout, he's been sleeping with Debbie and I.  Generally he migrates down toward our feet and stays there.  Last night, though, I woke around 1 am to feel him along my side, vibrating.  After a while my sleepy brain realized the poor guy was shivering!  On Friday the groomer gave him a whole-body buzz cut, down to about 1/8" long.  His fur coat was gone!  It was cold last night, and our bedroom windows were wide open.  I tucked him under our quilt and cuddled up with him, and after 15 minutes or so he stopped shivering.  A short time later, he was snoring as only field spaniels can.

It's so good to have him safely back...

I got up this morning around 2 am, and the first thing I did was to take our puppies out for a morning walk.  To my surprise the wind was howling away, 30 mph or so.  The forecast had no high winds in it at all!  Leaves and small branches were whipping us as we walked, and the puppies were wide-eyed and tentative upon seeing how the world had changed.  An hour later when I walked out to my office in our barn, the air was still.  If it weren't for the debris everywhere, you'd never guess we'd just had a windstorm!
Posted by Unknown at (permalink) 3:41 AM No comments: