Adventures in Wally World...  After a most enjoyable lunch at Jack's, we stopped at Walmart on the way home so I could run in and get a few supplies.  I was standing in front of the paper towel display, somewhat bewildered by the selection on offer and trying to figure out which I should buy.  Where I was standing was near the end of an aisle, so there were two passages near me – the aisle I was in, and the cross-connector aisle it abutted.

As I wrestled with my paper towel decision, I suddenly heard mad giggling.  A little girl – maybe six or seven years old – burst around the corner.  She looked like she was part Chinese, with long jet-black hair arranged in pony tails with big red ribbon bows tying them.  Those pigtails were flying completely out of control, and she was waving her hands and giggling as she ran behind me.  I turned around to watch her – her joy was infectious, and by the time she passed me and I was watching her disappear down the aisle, I was laughing myself.

Until suddenly I was knocked over, flat on my face.  My empty shopping cart went scooting down the aisle, and I flipped over to discover that I had a young lady stretched out on top of me.  It was the little girl's mother, a Chinese woman who was perhaps 25 years old, and in the process of changing her countenance from one of laughter to one of shock.  Just as I was figuring out what had just happened to me, the little girl came running back – crying.  It couldn't have been more than three seconds since she ran by laughing and giggling, and here she was somehow already crying and fearful.

A minute or so later, the little girl (named Chamomile!) was back to being happy.  Her mom was just fine, and she was now worried about me.  I was myself now pondering a completely different problem, this time of physics: how on earth could this woman (named Suzy), who couldn't weigh even 90 pounds and was only about 5' tall, have knocked me down with such force?  I figure she must have traveling at about 0.5 C (half the speed of light, for you non-nerds) to have pulled that off!

Suzy fussed over me for a while, but eventually I convinced her that I wasn't likely to die anytime soon, didn't need an ambulance or even a medical exam, and she and Chamomile left to do their shopping.  I finished mine and got into a checkout line with my shopping cart.  It looked like something out of a cartoon, with giant plastic wrapped collections of paper towels piled perilously high.  The clerk checking me out looked at my cart resignedly, and started scanning things.  As she was ringing up my stuff, Suzy came over to check on me again.  She seemed surprised to find me still conscious and apparently functioning :)  After she left, my checkout lady was very curious about why all the fuss from Suzy, so I told her the story.  She said, with a serious face, "We frown on knocking customers down at Walmart!" – and then cracked a smile.

All in all, I didn't really mind getting knocked down...
Posted by Unknown at (permalink) 5:44 PM 2 comments:

This is amazing!  The guy is so good I have trouble believing it's real!
Posted by Unknown at (permalink) 4:58 PM No comments:

The importance of water...

The importance of water...  Via my pistol-packing mama! 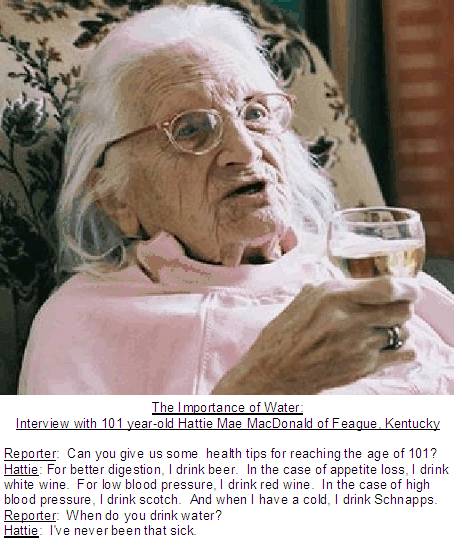 Posted by Unknown at (permalink) 4:57 PM No comments:

Halos in Paradise...  On our walkie this morning, the dogs and I got so see an especially good “halo effect”, what the Germans call “heiligenschein”.  The photo at right is not mine, but it's very close to what we saw today.  We saw it in the tall orchard grass growing along the road we walked on.

There are (so far as I know) three entirely separate mechanisms contributing to the effect we saw today.  When all three are working at once, the difference in brightness between the “halo” and an area in the sunlight a few degrees away can be as much as 10:1.  Also there can be some pretty color effects.  Here are the mechanisms, from smallest to largest contribution (in terms of halo brightness):

Posted by Unknown at (permalink) 10:58 AM No comments:

“But suppose horses can vote in the 21st century.”

“But suppose horses can vote in the 21st century.”  That's my quote of the day, in a must-read post by Richard Fernandez.  I read everything I see with his byline on it, and I'm always the richer for having done so...
Posted by Unknown at (permalink) 9:25 AM No comments:

A moving piece ... about being, and becoming, an American.  Our immigrants understand the former better than most of those born on our shores...
Posted by Unknown at (permalink) 8:57 AM No comments:

How to be a man...  A former SEAL sees a market opportunity, teaching those few young Americans who dare to identify as male how to be a man!

Doom.  I smell the doom approaching...
Posted by Unknown at (permalink) 5:21 AM No comments: