Dear God: Let me give you a list of just some of the things I must remember to be a good Dog.

1. I will not eat the cats' food before they eat it or after they throw it up.

2. I will not roll on dead seagulls, fish, crabs, etc., just because I like the way they smell.

5. The garbage collector is not stealing our stuff.

6. I will not play tug-of-war with Dad's underwear when he's on the toilet.

7. Sticking my nose into someone's crotch is an unacceptable way of saying 'hello'.

8. I don't need to suddenly stand straight up when I'm under the coffee table

9. I must shake the rainwater out of my fur before entering the house - not after.

10. I will not come in from outside and immediately drag my butt across the carpet.

11. I will not sit in the middle of the living room and lick my crotch.

12. The cat is not a 'squeaky toy' so when I play with him and he makes that noise, it's usually not a good thing.

Posted by Unknown at (permalink) 5:08 AM No comments:

These twins have their own language!  Cute and funny.  Via Frankie T.:

Posted by Unknown at (permalink) 4:53 AM No comments:

2012 Is Going to be an Interesting Election Year!

Via about half the readers of this blog:


Man who wants pretty nurse, must be patient.

Lady who goes camping must beware of evil intent.

Man who leaps off cliff jumps to conclusion.

Man who eats many prunes get good run for money.

War does not determine who is right, it determines who is left.

Man who fight with wife all day get no piece at night.

It takes many nails to build a crib, but one screw to fill it.

Man who drives like hell is bound to get there.

Man who stands on toilet is high on pot.

Man who live in glass house should change clothes in basement.

A lion will not cheat on his wife, but a Tiger Wood! 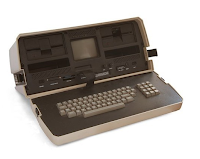 I owned one of these back in the early '80s, along with the (not pictured) optional Fresnel lens magnifier for the tiny little CRT.  I also wrote software for it – a little utility that automatically “tuned” the stepper motor head drive on the floppy disk drives.

Ordinarily the stepper motors were driven at a constant step rate, controlled by a Western Digital floppy controller chip that was a nearly universal standard in computers of the day.  This constant step rate was the simplest approach, but it wasn't the only one possible.  My utility accelerated the head motion for the first half of its travel, and decelerated it for the second half.  The result was considerably improved head positioning performance.  On such a slow system, this was no small matter.  I had no trouble demonstrating significant performance improvement on such common tasks as starting up an application.

However, that performance improvement is not why most people bought my little application.  There was, briefly, a little buzz about my “FastTrak” utility – because it made the Osborne I much quieter.  This was an unintended, but happy, side-effect of the performance improvement.  It turns out that a smoothly-accelerating head positioner doesn't “grind” the way a linearly-stepping head positioner does.

There's a lesson in there somewhere, but I'm not entirely sure what it is...
Posted by Unknown at (permalink) 4:39 AM No comments:

A New Way to Explore History...

Almost everything I've read of history (that's hundreds of books; history is a passion of mine) is secondhand material.  Historians research the original documents, digest them, apply their own spin, and write a book.  The historians cite and sometimes briefly quote the original source material, but only rarely does someone like me get to see any other than a very short piece of the real thing.

Some very different recently became available, from (of all people) Donald Rumsfeld.  As a companion site to his memoir, he's put up a web site that includes digitized and searchable texts of thousands of original documents related to his life and experience.  Given his career, this means that it's full of fascinating documents.  So far I've just dabbled in it, searching on a few keywords (like “Kandahar”) and just browsing through the results.  The whole experience, though, is entirely new to me – it's as though someone let me into Rumsfeld's private filing system.  What to look for?  I have to learn how to use this tool to satisfy my own thirst for historical knowledge.  It has the feel of something revolutionary and … really, really cool.

If you share my interest in history, you'll want to check this out.
Posted by Unknown at (permalink) 4:24 AM No comments: