Somehow our cats seem to know today is “special”.  Our youngest (the Savannah cat Jahar) is playing, hard, with one of our oldest cats (Tippy).  The pair of them are chasing each other all over the house, having a grand old time.  A middle-aged, portly cat (Halala Pala) tries gamely to follow them, but he can only manage about a third their speed.  Two older cats (Pana and Boots) are sitting on the sidelines, their heads swiveling as they closely follow the action.  And little Maka Lea (our physiologically challenged fellow) is also trying to join the action, but Jahar and Tippy can make it around the house about four times while Maka Lea runs three feet and flops over 'cause he tripped over himself.

I can't recall another time when the entire feline crew participated in this sort of thing all at the same time.

And it sure is nice to see Tippy looking so spry.  And proud of himself!
Posted by Unknown at (permalink) 11:17 AM No comments:

Mankind Will Benefit from My Vital Discovery... 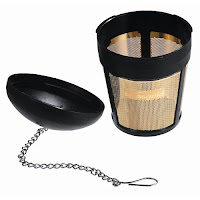 I own one of the tea strainers shown at right.  It's the best one I've ever owned.  I love the silly thing.

But until this morning, I've had one complaint about it, something I thought was an unavoidable consequence of its construction.

Until this morning, when I made my morning tea, I'd load up my tea strainer, drop it in my cup, and pour boiling water all over it.  The strainer would immediately bob to the surface, and what follows was a 60 second or so battle to get the thing to sink (so my tea could steep!).

This morning, I accidentally forgot to put the strainer in my cup before pouring the hot water in.  So I plunked it in after pouring the water – and it immediately sank to the bottom of the cup.  Of course, I then had to follow up with a series of tests.  Every time, pour first, it sinks; pour after, it floats.  WTF?

I finally figured it out.  When I pour after, water immediate coats the entire metal surface, and the pores of the tea strainer are blocked by stable water films powered by surface tension.  When I pour first and drop the strainer in, the upper pores remain unwetted until after the strainer sinks.  Simple.

There now, doesn't that revelation change your life in a positive way?
Posted by Unknown at (permalink) 11:12 AM No comments: 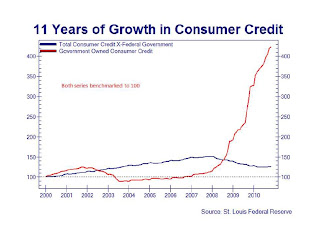 Over at Scribd they've got a terrific collection of totally depressing charts – 11 trends over the last 11 years.

The one that surprised me the most is at right (click to enlarge).  I hadn't realized that the Federal government owned so much consumer debt.  After a little research, I discovered this is primarily due Freddie Mac and Fannie Mae (both government-sponsored and government-backed institutions) capturing the dominant share of home mortgates – and home mortgages dominate consumer credit, of course.

In the last three years, federally-owned consumer credit has increased almost five times.  What does this mean?  It means that those (increasingly few) American citizens who, like me, actually pay taxes – it means we're on the hook to back almost five times more government-guaranteed debt.  Lovely.  What could possibly go wrong?
Posted by Unknown at (permalink) 11:04 AM No comments: