You've been warned: if you watch this, you can't unsee it.  I stumbled across this video quite by accident, watched it, and had the creepiest moment I've had in a long time.  I'd rather wake up to see a tarantula is tickling my nose than to be alone with this girl... 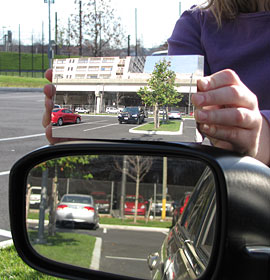 The top mirror at right uses a newly patented technology to make a low-distortion wide-angle mirror for car mirrors (shown at right as the top, handheld mirror).  Basically the patent covers a method for computing the shape of the mirror's surface.

From the descriptions I've seen on the web (which are unfortunately vague), the surface of the mirror is textured at a microscopic level – much like the surface of a high quality Fresnel lens (though not with circular patterns).  I've also been unable to find out anything about how the mirror would be manufactured.  My guess would be through a molding process, much like the high quality Fresnel lenses available today.

In any case, current U.S. regulations require a flat mirror on the driver's side, so it's unclear how long it will be before we could have such mirrors installed as standard equipment.  I suspect that when these new mirrors become available, they'll first be sold as add-ons.

On the vehicles Debbie and I drive we have old-fashioned convex mirrors installed as add-ons to the standard mirrors, on both the driver and passenger sides.  In my vehicle, I also have a convex mirror for the inside rear-view mirror.  I hate those blind spots left by flat mirrors, and they are particluarly bad in a large pickup truck like mine...
Posted by Unknown at (permalink) 4:37 AM No comments:

Today's quote is from John Yoo, currently a professor of law at Berkeley, formerly in G. W. Bush's Justice Department:


Candidate Obama campaigned on narrowing presidential wartime power, closing Guantanamo Bay, trying terrorists in civilian courts, ending enhanced interrogation, and moving away from a wartime approach to terrorism toward a criminal-justice approach. Mr. Obama has avoided these vexing detention issues simply by depriving terrorists of all of their rights—by killing them.

This is from an article Mr. Yoo has in today's Wall Street Journal.

My readers will, I think, be unsurprised to learn that I have no problem with executing, assasinating, murdering, vaporizing, or otherwise killing terrorists.  If the methods used are unsavory or inhumane, that also gives me no problem.  None at all, on either count.  I have more concern about the proprieties of killing cockroaches than I do about some asshole who thinks killing innocent people is ok.

I do, however, have a problem with a president setting himself up as the sole arbiter of who we target for such killings.  There are way too many problems with such an arrangement, not least of which are trusting the accuracy of the information made available to the president and trusting the judgement of the president.  Furthermore, it's not farfetched to note that a logical extension of Obama's process is to use drones in the U.S. to assasinate people here whom the president designates as enemies – with no due process at all, justified as required by the emergency situation.  The opacity and lack of accountability in Obama's chosen “kill list” process is, I believe, simply unacceptable – and downright dangerous.

Mr. Yoo has skin in this argument as a member of the previous administration.  Nonetheless, his point about the far greater transparency and accountability in the Bush administration is well taken – especially given the rhetoric of candidate Obama in 2008...
Posted by Unknown at (permalink) 4:24 AM No comments: