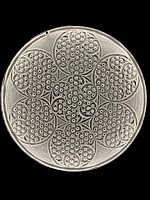 Sisyphus table software...  I've beaten this stuff into good enough shape that I've released it for public consumption.  I'm calling it “JSisyphus”, following the common Java practice of stuffing a “J” in front of the descriptive name to imply that it's written in Java.  It's in a public repository on GitHub, and licensed with the very permissive MIT license.  If you're a Java-head, and you have a Sisyphus table, go take a look!

The photo at right is a track that I made.  I call it “NestedBubbles”.  It's an example of the sort of recursive pattern that I built JSisyphus to be able to do.  Such patterns are typically very difficult with graphical tools, but easy in software – once you have some sort of framework in place that allows it.  That what JSisyphus does, and that track is the proof of the pudding...

As I've been developing this, I've been in communication with some of the folks at Sisyphus Industries (the makers of the Sisyphus table).  They've offered some help, but much more encouragement, as they're hoping to build a community of Sisyphus table users.  To that end, they've started a subreddit and asked me to contribute on it (which I have).  In the meantime before they get their online community software going, I'm also hosting a repository for Sisyphus table “tracks”, again on GitHub.

This morning I had something quite satisfying happen: an email out of the blue from a programmer who heard about JSisyphus.  He downloaded it and was having trouble making it work.  I answered a few of his questions, and a little while later I got an email from him letting me know that he had succeeded!  So just a couple of days after I let the world know about JSisyphus, it's already being used by someone.  Very cool!
Posted by Unknown at (permalink) 11:42 AM No comments:

A very nice lunch with our friends... 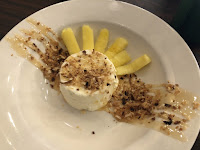 A very nice lunch with our friends ... Michelle, Lizzy, and Lily (Lizzy's three month old baby).  We had the pleasure of introducing them to one of our favorite spots: Jack's Wood-Fired Oven.  They had been there once previously, but only for dessert.  Yesterday we all had pizza and soup, and then dessert as well.  The soup was one of my favorites there: cream of fire-roasted tomato.  The personal-sized pizzas we chose were all excellent.  When it came to dessert, they were out of our favorite (their lemon cake with raspberries) – so we tried three other desserts and shared them.  One of them, a chocolate layer cake, was made by the same bakery that makes the lemon cake, and it was really good – smooth, moist, and drenched with intense chocolate flavor.  The other two – an Italian pineapple cream confection, and vanilla creme brulee – were made in-house.  Our delightful waitress strongly recommended the pineapple cream dish, so I ordered that (photo above).  The creme brulee I didn't try, as Lizzy was shoveling it into her mouth as fast as she could; I thought sampling it might be dangerous. :)  The pineapple dish was spectacular.  Our waitress has excellent taste!  Lizzy pronounced the creme brulee the equal of any she's had, and it looked nearly identical to our gold standard: the Gastognome's creme brulee.

Great company and great food is a very difficult combination to beat...
Posted by Unknown at (permalink) 4:09 AM No comments: 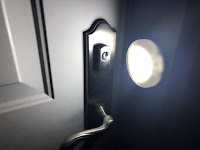 Product recommendation...  I put six of these little battery-powered lights up in my barn last year.  It's usually before sunrise when I come out to my barn office in the mornings, and these little lights come on automatically to light my path through the storage area of my barn's second floor, between the stair landing and my office door.  Despite being used almost every morning, they're still on their first set of batteries (three AAA cells each).  This week I bought another set of six ($20 for the set), and I put one up on the outside of my barn door.  That's what you see in the photo, lighting up my lock so I can see to put the key in.  These lights make no claim about being suitable for outdoor use, so this is a bit of an experiment.  At just over $3 a light, I'm not risking much. :)

It's remarkable to me just how well these cheap little things work.  They only come on at night, when they're needed – and even then, they only come on when they sense motion.  Generally they pick up my presence when I'm about 12 feet away, which is just about perfect for my needs.  Once they come on, they stay on for 30 seconds or so after they last sense motion.  That means if I hesitate in my walking or fumble for a key, the lights stay on.

Highly recommended!
Posted by Unknown at (permalink) 4:00 AM No comments:

No blue moon for us...  We've got thick cloud cover, solid, horizon-to-horizon.  Not even a hole to peek through.  It's very light, though, considering that cover – the moon above the clouds must be very bright indeed...
Posted by SlighlyLoony at (permalink) 2:47 AM No comments: