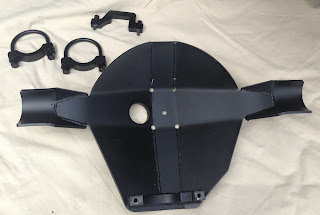 Late yesterday afternoon, Federal Express delivered a heavy box to us, containing the Boztec rear differential skid I'd ordered.  This thing is a single piece of quarter inch thick steel, cut, formed, and welded to form a protective cover for the rear differential housing (which is a relatively fragile casting). At right is what the parts looked like after I laid them out as I started installing it.

The big part is the skid itself, seen from the top.  It's a beautifully fabricated piece of metal.  The two “wings” sticking out left and right mate up with the bottom of the rear axle housing.  The 3/4" thick bracket visible at the bottom is the bottom half of the bracket connecting around the differential housing where the drive shaft enters (the front side); the odd-shaped bracket (top center) is the top half of that bracket.  The U-bolts go around the rear axle housing, and hold the axle housing wings in place. 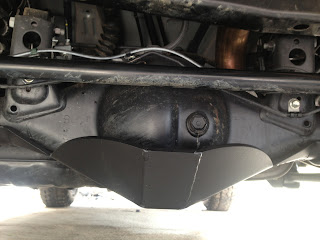 At left you can see what it looks like after installation, as seen from below the rear of the FJ.  It's like a steel hand wrapped around the differential housing.  I think I'd have to try really, really hard to hurt the differential now that this thing is in place!

Installing it was very straightforward.  I just held it roughly in place with my left hand while loosely installing and putting the nuts on the U-bolts with my right hand.  Then I rotated the skid until the bracket clanked into place, and loosely installed the hex-head bolts onto the top half of its bracket.  Then I did a little pounding (rubber mallet and a hardwood dowel) to get the U-bolts rotated so that the top brackets were level.  There's a hard brake line running just behind those brackets once they're installed; those were a little too close to the brackets for my liking, so I bent them slightly to move them away.  The trickiest part of the entire installation was figuring out how to get my socket wrench and Allen wrench into a position where I could put enough torque on all the nuts and bolts.  The entire process was just under an hour, front-to-back.  I wish the other skids had been so easy!

Posted by Unknown at (permalink) 12:10 PM No comments:


A new law proposed by the European Commission would make it illegal to "grow, reproduce or trade" any vegetable seeds that have not been "tested, approved and accepted" by a new EU bureaucracy named the "EU Plant Variety Agency."

It's called the Plant Reproductive Material Law, and it attempts to put the government in charge of virtually all plants and seeds. Home gardeners who grow their own plants from non-regulated seeds would be considered criminals under this law.

Don't Mess With the Old Dogs...

Via my lovely bride, this parable of age vs. youth:


One day an old German Shepherd starts chasing rabbits and before long, discovers that he's lost. Wandering about, he notices a panther heading rapidly in his direction with the intention of having lunch.

Noticing some bones on the ground close by, he immediately settles down to chew on the bones with his back to the approaching cat. Just as the panther is about to leap, the old German Shepherd exclaims loudly, "Boy, that was one delicious panther! I wonder, if there are any more around here?"

Hearing this, the young panther halts his attack in mid-strike, a look of terror comes over him and he slinks away into the trees.

"Whew!," says the panther, "That was close! That old German Shepherd nearly had me!"

Meanwhile, a squirrel who had been watching the whole scene from a nearby tree, figures he can put this knowledge to good use and trade it for protection from the panther. So, off he goes.

The young panther is furious at being made a fool of and says, "Here, squirrel, hop on my back and see what's going to happen to that conniving canine!"

Now, the old German Shepherd sees the panther coming with the squirrel on his back and thinks, "What am I going to do now?," but instead of running, the dog sits down with his back to his attackers, pretending he hasn't seen them yet, and just when they get close enough to hear, the old German Shepherd says "Where's that squirrel? I sent him off an hour ago to bring me another panther!"

The moral of this story: Don't mess with the old dogs - experience and skill will always overcome youth and treachery!

Posted by Unknown at (permalink) 8:00 AM No comments:

The Drums of Doom Beat Ever Closer...

In California they do.  We're raising a generation on notions like this one: that a Swiss Army knife is an evil weapon:


A fifth-grader in Cupertino, California was suspended and threatened with expulsion for bringing a small Swiss Army knife on a school-sponsored, science-oriented camping trip.

We have got to get out of here...
Posted by Unknown at (permalink) 7:55 AM No comments:

A Beautiful Piece of Code...

Not only is this beautiful code, but it involves regular expressions, was written by Rob Pike, and is explained by Brian Kernighan (two of my heroes while learning to program).  Awesome geekery!
Posted by Unknown at (permalink) 7:49 AM No comments:

Would You Fly With This Man?