Paradise ponders: creeping crud and remote gate sensing edition...  Poor Debbie is laid pretty low with some virus she most likely caught on her travels.   I took her to our local Urgent Care facility yesterday just to make sure it wasn't something truly awful.  The doc said it's just your usual virus, gave her a prescription for some codeine-based cough suppressant (seems to be working ok), and a backup prescription for antibiotics in case it was something more than a virus.  The doc practically begged us not to use the antibiotics, but to save us a possible second trip he gave us the prescription anyway, once he was sure that we understood his pleas.  From the manner of his delivery, I'm guessing that many people don't realize that (a) antibiotics are completely ineffective against viruses, and (b) that taking antibiotics when they're not needed has some undesirable effects.  You'd think by now, almost 100 years into a good understanding of viruses versus bacteria, that these things would be more generally known.  Apparently not...

In between caring for Debbie and the animals I've been working away on the remote gate sensing project.  Today I got the Tuxedo panel, the RF receiver, and the alarm panel all installed and working.  Furthermore, I got three of the five gate sensor installed and also working.  Woo hoo!  The remaining two gate sensors have to wait until my contractor has fixed the two gates they're going onto.  The only thing I have left to do is some caulking and painting of the cables running along the outside wall, which, weather permitting, I will do tomorrow.

Meanwhile, here's what the visible components of the system look like.  The first photo is the Tuxedo panel, which is installed in our kitchen, right alongside the door we use to let the dogs into the back yard.  It looks a bit like an iPad mounted on the wall.  The screen turns off after a few minutes of disuse, leaving a bland plastic slab visible – not exactly beautiful, but at least not obnoxious.  A touch to the screen lights it up again, at which point that green bar across the top means “All gates are closed!”   If that bar turns orange, one or more gates is open.  In that case, a couple of click on the touch screen will show the open gates, by name.  The second photo is the RF receiver, which I've mounted in the kitchen just above the aforementioned door.  It's particularly unobtrusive – you'd have to have an unusually observant person to even notice it was there. 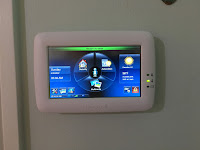 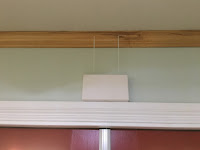 Posted by SlighlyLoony at (permalink) 5:09 PM No comments:

An inquiring reader wants to know...

An inquiring reader wants to know: what's it like for one who drinks alcohol to live in one of the states most restrictive about selling alcoholic beverages?  For those who don't know: in Utah one can only purchase packaged alcoholic beverages at a State Liquor Store.  There's one twelve miles from our home, in Logan.  An alcoholic beverage is apparently defined as anything containing more than 3.2% alcohol, because “3.2 beer” is sold in every grocery store.  You can also buy alcohol at bars (which we never go to) or in restaurants who have obtained a liquor license and who obey the rather arcane rules surrounding serving food and alcohol together in Utah.  It is illegal to ship alcoholic beverages into Utah, so we can't use online vendors like this.

Between the two of us, Debbie and I drink wine, beer, and scotch, all in small quantities.  We like to get “the good stuff”; it's one of the perks of retiring with enough money to afford it.  So how has living in such a restrictive state affected us?  Bottom line: hardly at all, and certainly not to the degree we expected it to.  Mainly this is because the State Liquor Stores actually carry a rather nice selection of the beverages we enjoy – better, in fact, than most of the retail outlets we knew best in San Diego.  There's one particular location (in Salt Lake City, of course) with an especially good wine selection.  Our local store's wine selection is decent, too.  All the locations seem to carry a broad selection of top-drawer single malt Scotch.  And all the locations also carry a wide variety of the craft beers that Debbie loves – including some from local craft breweries (mainly in Salt Lake City).

About the main effect we've actually been impacted by is being sawed off from the online vendors.  That we really do miss.  There's a fairly easy workaround we haven't yet employed: we could obtain a PO box from a place like Mail Boxes, Etc. in a nearby Idaho town, and have it shipped there.  It would be about an hour's round trip to go retrieve it.  We haven't been so motivated yet, though that's still a distinct possibility...
Posted by SlighlyLoony at (permalink) 7:24 AM 4 comments:

Paradise ponders: missions to space...  I'm sitting here this morning watching the live webcast of the latest SpaceX Falcon 9 launch, on my laptop in my kitchen (screenshot at right).  Watching this got me to remembering the first such launch I followed: the launch of Vanguard 1, on March 17, 1958.  I didn't see this on television; I listened to it on my crystal radio, the one my dad helped me build.  After that, every chance I got I listened to (on radio), watched (on television), and read (in science related magazines) everything I could, up through the Apollo moon missions.  Much of the detailed information about those missions came from books and magazines published long after the actual launch. 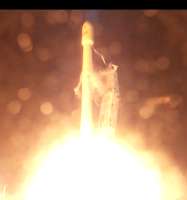 Now fast-forward nearly 60 years, and here I am in my kitchen.  I'm watching a high-fidelity, realtime presentation on the SpaceX launch, on my laptop computer.  It's connected by WiFi to the Internet, which is how the video is being sent to me.  It's in hi-fidelity, full-color, with great audio.  There is realtime video from the launch pad, from the first stage, from the second stage, and from the drone ship where the first stage will attempt to land.

It's a few minutes since I wrote the above paragraph, and now the first stage has successfully landed on the drone ship.  The second stage is in parking orbit, preparing to transition to a higher orbit where the Iridium satellites (ten of them) will be deployed.

SpaceX is really starting to make satellite launching routine, in a way that NASA was never able to do.  So far this year they've launched 15 rockets to orbit, and recovered the first stage successfully on 8 of those flights (something NASA once declared “impossible”).  For me, the excitement I'm feeling today about SpaceX's efforts is that they provide a promise that commercial exploitation of space might just be possible.  Elon Musk has far grander visions than that, but personally I'd be satisfied with nothing more than igniting commercial exploitation – because then I know for sure that mankind's ventures into space will be better-managed, sustained, and successful...
Posted by SlighlyLoony at (permalink) 5:52 AM No comments: