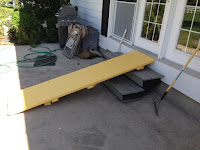 Dog ramps in Paradise...  At right is the ramp, installed over the stairs outside our back door.  I put the final (top side) paint on it this morning, and then installed it late this afternoon.  Actually installing it was a bit anticlimactic – it all just worked.  I'd adjusted the adjustable feet to my calculated height before moving it out of the shed – and that turned out to be perfect.

I'll count that as a dog ramp success!
Posted by Unknown at (permalink) 2:41 PM No comments:

Track record of drugs decriminalization (or re-legalization)...  Friend, reader, and former colleague Simon M. passes this article along.  It discusses the experiences of Portugal after 14 years of drug decriminalization.  Bottom line: it was a big win for Portugal, and none of the outcomes feared by many (jump in drugs use, drug tourists, health issues, etc.) occurred.  In fact, Portugal's record on all these issues has improved.  The same is also true for the other countries that have decriminalized (or re-legalized) psychoactive drugs.

One aspect of the criminalization of drugs fascinates me for some reason.  It's this: many Americans – I'd guess north of 75% – don't realize that until 1914 all drugs were legal in the U.S.  In 1914, the Harrison Act was enacted, which banned the distribution of opiates and coca products.  Before that, Americans were completely free to produce, distribute, sell, and consume absolutely any drug at all.  Most Americans think that drugs have “always” been regulated.  Somehow the country survived, without any notable drugs-induced disasters...
Posted by Unknown at (permalink) 11:06 AM No comments:


The seven dwarfs always left early each morning to go to work in the mine.
As always, Snow White stayed home doing her domestic chores.

As lunchtime approached, she would prepare their lunches and take them to the mine.

One day as she arrived at the mine with the lunches, she saw that there had been a terrible cave-in.

Tearfully, and fearing the worst, Snow White began calling out, hoping against hope that the dwarfs had somehow
survived. 'Hello. Hello!' she shouted. 'Can anyone hear me? Hello!'

For a long while, there was no answer. Losing hope, Snow White again shouted, 'Hello! Is anyone down there?'

Just as she was about to give up all hope, she heard a faint voice from deep within the mine, “VOTE FOR HILLARY IN 2016 .”

Snow White fell to her knees and prayed,  Oh, thank you, God! At least Dopey is still alive!

Snow White had no trouble identifying that particular dwarf!
Posted by Unknown at (permalink) 10:53 AM No comments:

Online compendium ... of robotic space probes.  Interesting stuff!
Posted by Unknown at (permalink) 6:33 AM No comments:

What is Curiosity looking at? What is Curiosity looking at?  A circular orb being obscured by an irregularly shaped object.  I'll speculate that we're seeing a Martian moon (most likely Phobos) transiting the sun.  This has happened several times in the past.
Posted by Unknown at (permalink) 4:56 AM No comments:

Well, this is discouraging...

Well, this is discouraging...  Pope Francis is getting strident in his socialism (and consequent anti-capitalism).  So here we have a major religious leader condemning the ideas that have done the most good for mankind.  Lovely.  I have no idea how much impact his views will have.  One can only hope they're minimal.  The first thing that came to mind, though, is that his views might sway American voters to first anoint Bernie Sanders the winner in the Democratic primary, then in the presidential election.  Oy!
Posted by Unknown at (permalink) 4:50 AM No comments:

Last look at the weird regular “spots” on Pluto... Last look at the weird regular “spots” on Pluto...  The timing of New Horizons' flyby of Pluto on Tuesday dictates that the bizzaro-land regular geometric spots will be on the opposite side of the planet during the flyby.  The photo at right is the last one that New Horizons will see showing those spots.

This is going to keep the planetary geologists busy for a while :)

Those spots remind me of regular geometric patterns I've seen in Alaska and northern Canada, where they're caused by frost upheaval in the tundra soils.  I'm not saying that's the cause on Pluto, just that they remind me of it.  For one thing, the scale on Pluto is vastly different.  The spots on Pluto are 300 miles or so across; the tundra patterns I've seen are 5 to 10 feet across!
Posted by Unknown at (permalink) 4:46 AM No comments: