From the Saskatoon Police Service (for the geographically challenged, Saskatoon is a city in Saskatchewan, Canada), this report on an incident that happened on Friday, July 13th, 2012:


The Saskatoon Police Service responded to a rather curious single vehicle collision at approximately 8:05 pm July 13th, 2012. A motorcyclist, who had been travelling at an excessive speed, attempted to navigate the curve to travel westbound on Circle Drive from Boychuk Drive. The 27 year old male operator was unsuccessful and subsequently lost control of his bike.

The motorcycle and its operator separated as both left the travel portion of the roadway and became airborne. Witnesses report the two had enough momentum that they landed in a slough some distance from where they had departed the road surface. On attending to the scene Officers did indeed locate a wet motorcyclist and nearly submerged sport motorcycle.

The operator was transported from the scene to hospital by MD Ambulance personnel. He is suffering from injuries reported to be of a minor nature and is expected to make a full recovery. Investigators believe landing in the slough prevented him from being far more seriously injured. The motorcycle, being poorly designed for both flight and marine operation, sustained significant external and internal damage.

Charges of Driving at a Speed Greater Than Reasonable and Safe and Changing Lanes When Unsafe have been laid against the motorcycle operator. The Saskatoon Police Service would like to remind motorists that excessive speed is often a major contributing factor in vehicle collisions and that vehicles should only be utilized in the manner for which they are designed and intended.

There's a lot to love in this report. If forced to pick a favorite sentence, I think it would have to be the last sentence in the third paragraph.

I've never met a police officer who could have authored this report. I would like to.  Awesome!
Posted by Unknown at (permalink) 12:33 PM No comments:

Debbie and I finished up a project today: we put trim around the interior side of the new patio door we installed a few weeks ago.  We used three pieces of nice milled trim (vaguely Southwestern in style), joined at the top left and right corners by little corner pieces like the one at right.  It's just a piece of pine about 3 inches square, milled with a simple little pattern.  What could be more innocent – and more harmless – than this little piece of pine?

Well, take a look at what the State of California is now requiring lumber stores to do:

Snopes says this is for real.  Read the message in the last photo (click to enlarge).  Via my lovely bride... 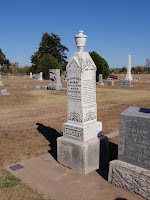 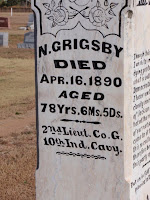 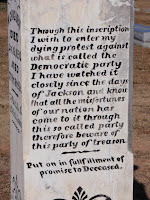 Posted by Unknown at (permalink) 8:01 AM No comments:

Of course they are!  Via my lovely bride: 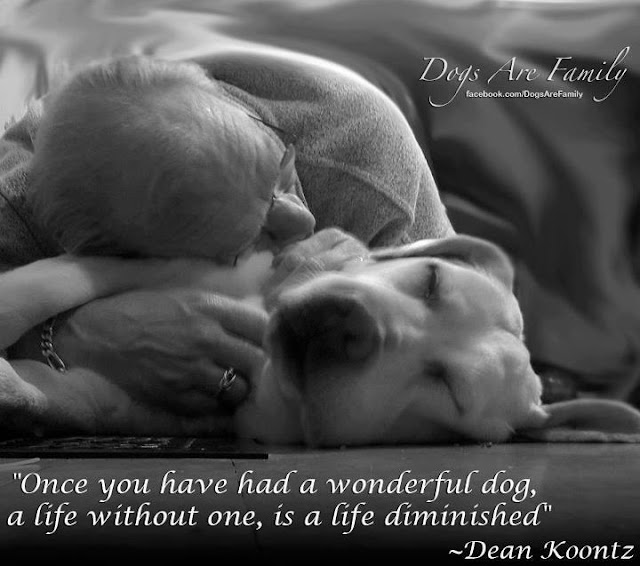 The toshers of Victorian England.  There are a lot of candidates for the worst job ever.  This is certainly amongst the top tier, if not the outright winner...
Posted by Unknown at (permalink) 7:54 AM No comments:

Read about the father of the modern Olympics: Dr. William Penny Brookes of Much Wenlock, in Shropshire, England...
Posted by Unknown at (permalink) 7:52 AM No comments:

Many more listed in the comments...
Posted by Unknown at (permalink) 7:45 AM No comments:

Ninety percent of population is massed within 100 miles of northern American border.

Seems not to mind that one of its provinces has turned almost entirely French.

Excessive politeness only makes sense as cover for something truly sinister. But what?

Decriminalization of marijuana and acceptance of gay marriage without corresponding collapse of social institutions indicate Canada may, in fact, be indestructible.

Has infiltrated entertainment industry with singers, actors, and comedians practically indistinguishable from their American counterparts.

Consistently stays just below cultural radar yet never quite disappears.

Never had a “disco phase.”

Keeps insisting it “has no designs on America” and “only wants peace.”

Posted by Unknown at (permalink) 7:42 AM No comments:

Mark Steyn at his best:


Thus, in 2008, Barack Obama, being the preferred choice of America's youth, was, by definition, the candidate of progress and the future. In humdrum reality, his idea of the future doesn't seem to be any more futuristic than the pre-Thatcher statist wasteland of Britain in the Seventies, but that didn't stop the massed ranks of fresh-faced youth chanting "We are the Hopeychange!" in adoring if glassy-eyed unison behind him at every campaign rally. Four years later, half of recent graduates can't find full-time employment; Americans' college debt is now larger than credit card debt; the number of young people with summer jobs is at a record low; and men in their late twenties and early thirties trudge upstairs every night to the same bedroom in which they slept as a kindergartner.

And that's before they're permanently buried by interest payments on the multitrillion-dollar debt and unfunded liabilities from Medicare. Yet in 2012 the rubes will still vote for Obama and be congratulated by the media for doing so. Because to be young is to vote for hope and change.

He goes on to talk about the youth in the “Arabian Spring” – read the whole thing...
Posted by Unknown at (permalink) 7:33 AM No comments: 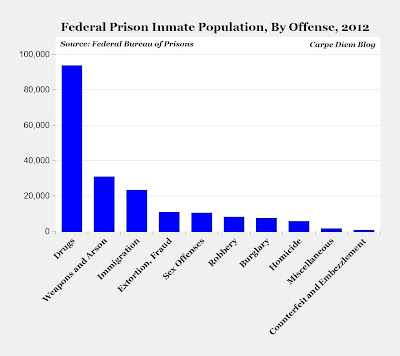 Here's a graph that paints a clear view of something I find profoundly sad – the fact that our prison population is dominated by people convicted of illicit drug use.

But the dominance of drug-related “crime” is actually much worse than this chart depicts.  Why?  Because a significant fraction of the non-drugs crimes at right were committed by drug users to fund their habit.  Depending on whose numbers you want to believe, something between 25% and 60% of all property crimes committed in the U.S. are indirectly drug-related.  The main reason drug users commit crimes to fund their habit is because of the extraordinarily high price of the drugs they crave.  Those drug prices are high only because they are illegal.  Precisely the same thing happened with alcohol during Prohibition.  It's happening here, too.

Many people aren't aware that drug regulations are a relatively recent “innovation”.  The very first law of any kind regulating drugs in the U.S. was passed in 1892, to regulate opium use (restricting it to designated “opium dens”.  This was aimed mainly at Chinese immigrants, and driven by widespread American disdain for Chinese culture.  Very little else happened in the way of regulation until the 1920s – before that, any American who wanted any drug – coffee, alcohol, opium, cocaine, heroin, hashhish, marijuana – was free to purchase and use it.  Drug stores kept opium, cocaine, and heroin on the shelf.  Marijuana was readily available, especially in the American south.  Alcohol and coffee were available nearly anywhere.  There were users of these drugs all across the U.S.  Some abused those drugs (like some abuse alcohol today).  Most did not.  American society didn't fall apart.  In fact, one could make persuasive arguments that our high incarceration rates today (10 times what they were 100 years ago) are more damaging to our society than drug abusers were when drugs were completely unregulated.

I'd sure like to see us going back to our former libertarian approach to drugs: let the use of them be by personal choice, and punish only those that through their irresponsible use of drugs cause harm to others.  In other words, let's treat all drug use the way we treat alcohol use today.  If we did so, we'd “repatriate” tens of thousands of productive citizens, and likely cut our prison populations by two thirds (some think more!).

This is one topic where I'm 100% in agreement with the libertarians (and there aren't many like that!)...
Posted by Unknown at (permalink) 7:27 AM No comments: